Not To Be Trusted

Why the People Don’t Believe the Economists

I wrote recently about the American Economics Association panel called "What do economists think about major public policy issues?" Actually, I only talked about one of the two papers presented there; the other was by Luigi Zingales, and was entitled "Comparing Beliefs of Economists and the Public."

Zingales either performed a survey or reviewed a survey (I can't remember which) that compared economists' and non-economists' positions on policy issues. The paper found quite a bit of disagreement, but here's the really interesting part: When normal people were told the position of the economists, they changed their positions in the opposite direction.

In other words, saying that "economists believe X" made people less likely to say they believed X!

Ryan Avent of The Economist has a great summary of the findings here, complete with a fun chart, which I will now steal: 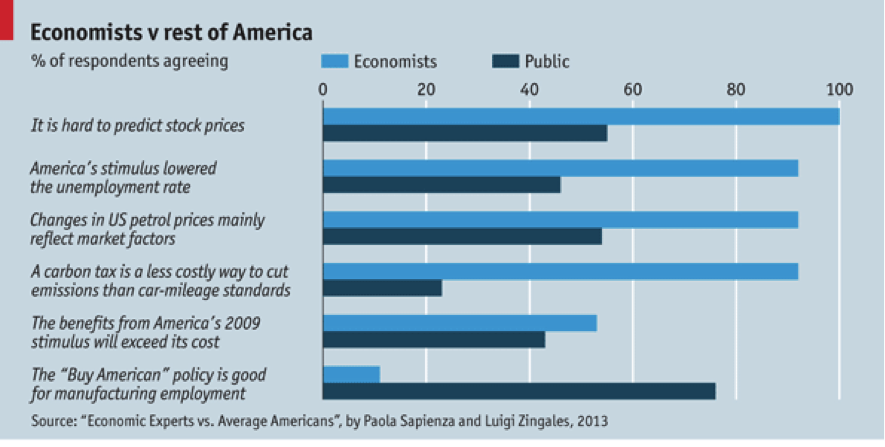 Now, maybe this was just an expression of good old American anti-intellectualism, like Insane Clown Posse's views on magnetism, or the Republican Party's denial of evolution. But Bob Hall, who was a discussant on the paper (and who I've heard referred to as "the greatest working macroeconomist") had a different interpretation. "The average American," Hall memorably declared, "thinks of economists as masters of an alien religion, with teachings no more relevant than Buddhism." Non-economists, he said, see economists not as empirical scientists, but as deductivist Aristotelian philosophers, sitting around and thinking of how economies ought to work while totally ignoring the evidence of how they really do work.

I have to say, I have encountered that view a lot. On occasion, I have even espoused it myself (with respect to certain pockets of the econ world, mind you, not nearly the entire profession). I think it is certainly true that economics doesn't have the multi-century empirical tradition possessed by physics, biology, and chemistry. For a long time, econ was a literary enterprise, advanced by philosophical treatises rather than laboratory experiments. Some of that culture still lingers, though I think it's been changing.

But what do non-economists know about that? They don't go to econ conferences or read econ papers. Most of all, they just see what we write in the press. Now, there's a school of thought that econ's big shame is macroeconomics - that people see us disagreeing about whether to ease monetary policy or tighten, whether to spend on stimulus or tighten our belts with austerity, and think "Man, these economist guys just don't know anything." I do think there's a bit of that going on. But I think that there's another issue that has done far more to hurt economists' standing with the public. An issue on which economists, for once, have extreme consensus rather than disagreement. And on which that consensus is nearly the opposite of what almost every non-economist believes to be the nature of the world.

"Free trade" is the one issue on which economists – at least, American economists – famously agree. And yet, substantial majorities of Americans think that free trade has hurt them. In the Zingales paper, trade was the issue where there was the greatest divergence between economists and the public. How can the common people disagree so sharply with the overwhelming expert consensus? Are the common people simply a bunch of flat-earthers who refuse to look at the evidence? Or do they have a point?

The free trade consensus is certainly one issue where economists' convictions tend to spring from Aristotelian deduction rather than careful consideration of empirical evidence. The logic of free trade — If trade was bad for people, why would they choose to trade? — is simple and compelling. And the Econ 101 explanation of the gains from trade — the Ricardian theory of Comparative Advantage — is counterintuitive, clever, and simple to master.

But there has always been another idea of trade out there. We usually call it "mercantilism." This is basically the idea of state-directed, export-oriented industrial policy. Dani Rodrik, a Harvard economist, explains:

Think of mercantilism as a different way to organize the relationship between the state and the economy — a vision that holds no less relevance today than it did in the eighteenth century...

Mercantilism... offers a corporatist vision in which the state and private business are allies and cooperate in pursuit of common objectives, such as domestic economic growth or national power...

Mercantilists... emphasize the productive side of the economy. For them, a sound economy requires a sound production structure. And consumption needs to be underpinned by high employment at adequate wages...

Mercantilists... view trade as a means of supporting domestic production and employment, and prefer to spur exports rather than imports.

Most American economists believe mercantilism to be a debunked idea, a false doctrine refuted since the time of Adam Smith. In fact, the collective memory of this "great victory" may be one thing that makes the free trade consensus so precious to Smith's successors in the Anglo-Saxon world. But remember, Adam Smith (though possessed of an excellent last name) lived in the time of literary economics, when empirical evidence was not much of a check on logical argumentation.

What does the empirical evidence tell us about mercantilism today? Well, it's difficult to say, but it is worth noting that all the countries that have become rich in recent decades have employed extremely mercantilist policies. Dani Rodrik again:

In a nutshell, [this] is the story of the last six decades: a succession of Asian countries managed to grow by leaps and bounds by applying different variants of mercantilism. Governments in rich countries for the most part looked the other way while Japan, South Korea, Taiwan, and China protected their home markets, appropriated “intellectual property,” subsidized their producers, and managed their currencies.

This is probably why economists in those countries are much more sympathetic to mercantilism than their counterparts in the Anglosphere. (Of course, it's worth noting that the US, Britain, Germany, etc. were also extremely mercantilist during their periods of rapid economic development.) To the south, Latin Americans are fairly annoyed that the "Washington Consensus" of free trade and low government intervention didn't reap the same results enjoyed by the East Asian mercantilists. Rodrik has written some papers arguing that industrial policy, while generally not such a good idea for rich economies, is far more effective as a development strategy. Finally, there is a lot of evidence that the most common thing that pushes countries out of long economic slumps is an increase in exports, usually preceded by a depreciation of the currency.

So Americans look at developing countries like China powering ahead with mercantilist models. Then they see themselves losing jobs to Chinese competition. They see their country in a long slump, while countries with export booms manage to bounce back quickly. And here come all these economists, with their simple little theories of how free trade is always good?

Which doesn't mean the common people are right. Maybe Rodrik's research is wrong. Even if it's right, maybe industrial policy and mercantilism lose their luster once you near the technological frontier. Maybe export booms can only be engineered by small open economies or developing countries, not by a big rich nation like the US. In general, when the common people go up against the experts, it's the experts who come out on top (see Nate Silver, evolution, climate change, etc. etc.).

I'm really not sure. But here's the thing — I suspect that a lot of economists would also not be so sure, if they actually took the question to the data and tried to get a comprehensive picture of the real-world effects of trade. It would be a difficult task, and the answers would not be clear. But it would, in my opinion, be a better approach than simply repeating the nostrums of Econ 101 and Ricardo.

I tend to side with the experts, but I definitely have some sympathy for the intuition of the common people. As I recall from the panel, Luigi Zingales felt similarly.