US Hurricane Impacts Bigger – and Smaller – Than They Seem

A Global Perspective on Sandy

News networks inside and outside the US have given an overwhelming amount of attention to Hurricane Sandy, the latest big storm to strike the eastern coast of the United States. Some people elsewhere in the world—particularly in southeast Asia, where such storms are common, and much more deadly—may well wonder what the fuss is about. And they have a point.

There is a reason for the world to care about storms like Sandy. The total economic impact of a cyclone hitting the US—particularly the northeastern US—is greater than almost anywhere else in the world. And a blow to the US economy has knock-on effects elsewhere. The map below, in which the sizes of the countries are distorted relative to total economic impact, shows that economic losses have been greatest in the United States, Japan, and China from 1980-2008: 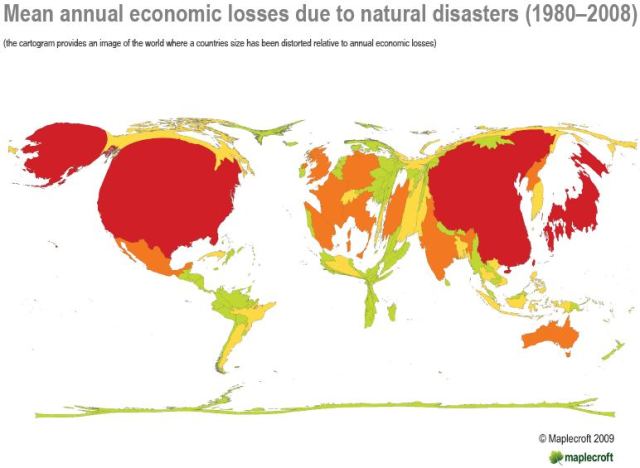 The United States, China, and Japan have seen the most dramatic economic losses from natural disasters from 1980-2008. Maplecroft

However, when the map is reconfigured to show economic impacts as a percentage of GDP, the dent made on the US by storms like Sandy is almost inconsequential. By contrast, countries in Asia—particularly southeast Asia—not only have storms much more often, but experience much more dramatic losses when they hit: 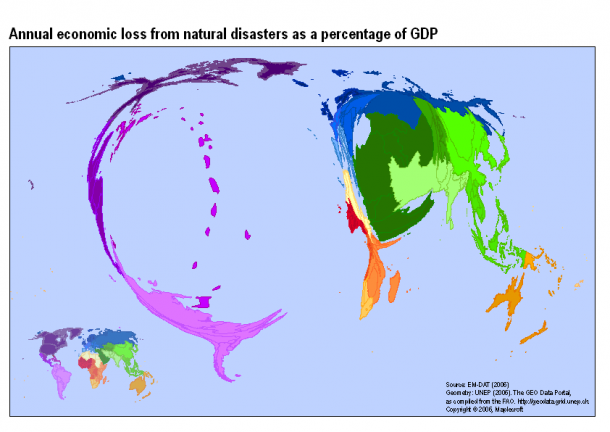 Asia sees a much higher economic impact relative to GDP than the Americas from natural disasters. Maplecroft

What’s more, research also suggests that poor countries find it much harder to recover from natural disasters than rich ones. Ilan Noy, a professor at the University Hawaii and Victoria Business School writes:

Most recent research suggests that aggregate adverse short-run effects, at the national level can be observed in middle- and low-income countries experiencing traumatic disasters. These countries have difficulty financing reconstruction; as they generally face difficulties conducting counter-cyclical fiscal policy and their insurance and re-insurance markets are significantly shallower. The short-term adverse impact in high-income countries, in contrast, is typically countered by the increased reconstruction spending.

That’s certainly the case in swiftly growing Asian countries like Bangladesh, Thailand, and parts of India. Thailand has yet to recover from lightly reported floods in 2011, which wiped out 9% of the country’s GDP and ruined important infrastructure.

But as these countries become richer, the effects of such disasters could be felt more widely. “As the global influence of emerging economies increases; the importance of their inherent natural hazard exposure will have wider and deeper global implications,” said research firm Maplecroft’s Helen Hodge. 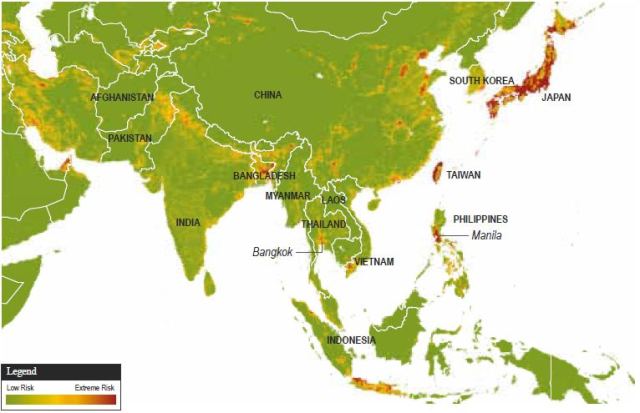 The global impact of natural disasters could soon rise in emerging economies like those of Southeast Asia. Maplecroft

Then again, more robust economies could make natural disasters easier to manage. According to data compiled by the United Nations Office for Disaster Risk Reduction, the higher the GDP per capita in a country, the lower the long-term economic impact of a storm of a given strength:

The risk posed by natural disasters is negatively correlated with the GDP per capita of any given area. The study categorizes disasters from one to five, five being the most severe. Global Assessment Report on Disaster Risk Reduction 2011

The data also show, however, that the harsher the storm, the less a country is cushioned by having a high GDP per capita. A bad storm is a bad storm anywhere. We’ll have to wait and see where Sandy—a veritable “Frankenstorm” comprised of both a hurricane and parts of a nor’easter—ultimately falls on this list.

This article originally appeared at Quartz, a new kind of global business publication.