How Environmentalists and Skeptics Misrepresent the Science on Polar Bears

Last month an alphabet soup scientific working group you’ve never heard of — the IUCN/SSC PBSG — added a brief footnote to a forthcoming report you didn’t know they were preparing. Just another day in the annals of the worldwide research community. Except, of course, when that body is the Polar Bear Specialist Group, and the item in question involves just how many polar bears currently exist on Earth.

The PBSG is made up of scientists and wildlife managers from the five nations where polar bears are found: Canada, the United States, Russia, Norway, and Greenland/Denmark. The group meets every three to five years and in recent decades their publications have taken on an increasingly dire tone. Polar bears need sea ice in order to hunt for the seals they subsist on, and as climate change has transformed the Northern latitudes, the bears’ future prospects have dimmed.

As a practical matter, the PBSG maintains a data table on their website, letting the public know the population status for each of the 19 polar bear subpopulations. The current table pegs the Baffin Bay bears at 1,546, for example, and shows that the Northern Beaufort Sea has 980. Taken together, these tallies form the basis of an oft-repeated fact: the total worldwide population of polar bears is somewhere between 20- and 25,000 animals. For better or worse, both scientists and the popular press have often treated this ballpoint figure as a scientific estimate, and it has become the baseline against which potential population declines are measured.

And that’s why the footnote — made quietly public by PBSG chair Dr. Dag Vongraven — took polar bear watchers by surprise. It reads, in part:

It is important to realize that this range [20 to -25,000] never has been an estimate of total abundance in a scientific sense, but simply a qualified guess given to satisfy public demand. …[T]here is either no, or only rudimentary, knowledge to support guesses about the possible abundance of polar bears in approximately half the areas they occupy. Thus, the range given for total global population should be viewed with great caution as it cannot be used to assess population trend over the long term.

The right-leaning blogosphere jumped on this nugget as a gotcha moment, a typical overreach by the scientific cabal committed to the global warming hoax. The Washington Times said that the numbers were “fudged” and Fox News went so far as to say that “scientists admit that polar bear numbers were made up.”

But let’s give the scientists their due. Counting polar bears is hard. Their habitat encompasses millions of square miles. They blend into their background, they don’t sit still — one bear was satellite-tracked on a 3,000-mile trek — and they’re dangerous to work with. To study them scientists have to journey, repeatedly, to places that are punishingly remote and hideously expensive to access. Some populations have never been counted, and only a handful have been counted twice, the minimum prerequisite to establish trends.

What’s news isn’t the idea that polar bear totals are a best-guess estimate. Of course they are. What’s new is the emerging understanding by established polar bear scientists that they may have done themselves a disservice by tacitly allowing the public to treat their good-faith estimates as rigid facts. In proceedings, papers, and press availabilities, polar bear scientists have repeatedly referenced the 20,000+ number. But what was never made clear was that the PBSG has been assigning a zero value to the unstudied areas, territory that encompasses as much as half of the bears’ geographic range. A casual observer, even one who is fully invested in protecting polar bears, would be justifiably upset at discovering that the total count has been consistently under-estimated. 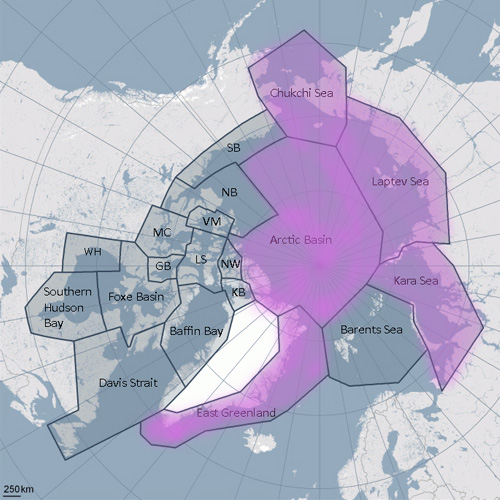 The area shaded purple represents the regions that have not been surveyed for polar bears – which accounts for almost half of the bears' habitat. Credit: PBSG

The need to satisfy public curiosity is understandable, and the practice of estimating is scientifically valid. But the decision to exclude such a large area from the estimate is shakier, and risks undermining public confidence in the excellent work these scientists are performing.

The Polar Bear Specialist Group first met in the mid-1960s, when hunting had pushed polar bears to the edge of extinction. The 1973 global hunting ban began a welcome rebound for this much-watched master predator. Since then, it has become common practice for journalists to say that, at the low point, the total polar bear population was in the neighborhood of 5,000 animals. Modern polar bear scientists have been quick to dismiss that number, correctly pointing out that it was guesswork based on incomplete data and populations that had never been surveyed.

It’s the juxtaposition of how the two estimates have been treated that’s problematic. Should we trust estimates or not, and how are non-scientists supposed to know which best-guesses to believe? Polar bears have been swept up into the culture wars and both environmentalists and climate change skeptics seize on isolated data points to make large, sometimes unsubstantiated claims. By not frankly acknowledging uncertainty, the scientific community practically invites such cherry-picking. A report of low birth rates among the Svalbard Island bears is trumpeted by the left as proof that all is lost. Which begs the right to respond by saying, “Well, what about that unusually high number of cubs back in 2011?” or “How do you explain the increasing population over in the Chukchi Sea?” In the lives of populations, there are good years and bad years, but no single year means much of anything.

It is almost certainly true that polar bears face tough times ahead. Allowing the public to believe that the decline will be linear and predictable just sets people up for a perverse kind of disappointment when occasional good news deviates from the predicted path. Of the 19 subpopulations, the PBSG table currently lists four as “declining,” six as “stable” or “increasing”, and nine as “data deficient.” Every subpopulation reacts to unique local forces, making it difficult to pinpoint global trends. Moreover, unless there is a monumental—and monumentally unlikely—investment of time and money to census, re-census, and re-census again, it’s likely that we will never get a complete count or a crystal-clear trend line.

Certainly, most scientists would prefer to be left in peace to do their work. But polar bear researchers don’t have that luxury, and they need to remain aware that what seems obvious to them may be exploited or misconstrued by lay audiences. The PBSG’s footnote is a step in the right direction, even though it makes the state of public knowledge a little murkier. Nobody likes uncertainty, but it often ends up being the best that we can do.

Zac Unger is a writer who has reported extensively on polar bears. He is also a firefighter and paramedic with the Oakland Fire Department. He is the author of Never Look A Polar Bear in the Eye and has written for Slate, The Economist, Men's Journal, and other publications.