Or so claims Amory Lovins in a new piece about renewable energy in Germany. Anyone with a passing knowledge of the level of nuclear power in Germany will recognize this claim is utter nonsense within about two seconds. However, since Lovins appears incapable, or unwilling, to do the basic arithmetic, let’s do it here. A couple minutes on Google can find a summary of German solar and wind installations in 2011: 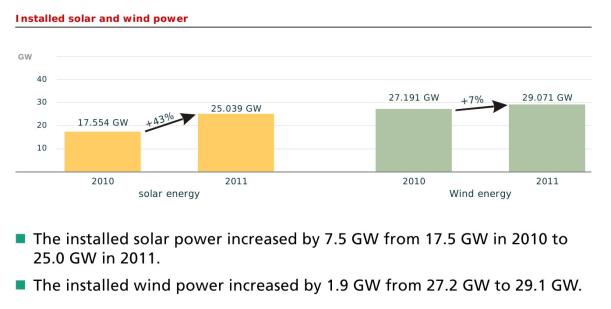 To make it terse: 7.5 GW of solar and 1.9 GW of wind was installed in 2011. The figures in Lovins piece show that nuclear power generated 130 TWh of juice in 2010, and this is in line with what the International Energy Agency says. How does the annual production of 2011′s new installations of renewables compare?

7.5 GW of solar in one year (assuming a capacity factor of 10 percent, which is roughly the German average) gives us 6.6 TWh.

1.9 GW of wind in one year (assuming a capacity factor of 40 percent, which is generous given the average is currently below 30 percent) gives us another 6.6 TWh.

Added together we have a total of just over 13 TWh each year from Germany’s new installations of renewables in 2011. So, it will take Germany at least 10 years at 2011′s build rate to displace their pre-Fukushima nuclear output with renewables. (Note: ten years of solar additions at 7.5 GW is probably Easter Bunny territory. This will result in over 100 GW of solar on the grid, and in Germany having more solar and wind than it knows what to do with on a sunny day.)

So, the basic math on Germany’s nuclear phaseout is very clear, yet I suspect that Lovins will not be the last person to try to deny it.

Robert Wilson is a PhD candidate in Mathematical Ecology at the University of Strathclyde in Glasgow. He blogs at Carbon Counter, where this article first appeared. You can follow him on Twitter @CountCarbon.