The Costs of Sequestration

Congress has yet to come up with a plan for handling the threatening consequences of sequestration, or the blunt, automatic across-the-board budget cuts enacted by law by the Budget Control Act of 2011, a consequence of Congress’s failure to agree on a bipartisan deficit reduction plan. As a result, the first installment of cuts goes into effect January 1st of 2013 which, according to the Energy Innovation Tracker, will have significant impacts on clean energy innovation that will severely handicap America’s already underfunded clean energy innovation ecosystem.

Under the Budget Control Act of 2011, the sequester calls for the reduction of the federal debt by $2.4 trillion over a ten year period; $1.2 trillion of the savings are slated to come from discretionary spending, which funds the federal government’s education, science, technology and research programs, among others. A report recently released by the Information Technology and Innovation Foundation, Eroding our Foundation: Sequestration, R&D, Innovation and U.S. Economic Growth, verifies concerns over the future of U.S. competitiveness if Congress fails to come up with a viable debt reduction alternative. The report concludes that because R&D is critical to economic growth, reduction in R&D investments – which under sequestration would be cut by roughly 8 percent from FY2011 levels and held at this level until 2021 – would result in GSP losses of between $203 billion and $860 billion between 2013 and 2021. The report states, “We agree that deficit reduction is clearly a necessary task. However, as growth is a key component to achieving that task, the evidence presented clearly shows that cutting R&D expenditures will in fact negate efforts to reduce the deficit.”

Using ITIF’s analysis in coordination with the Energy Innovation Tracker budget database, we can assess how these cuts would specifically impact clean energy innovation programs across the federal budget. To estimate future trends under sequestration, ITIF’s report assumes R&D intensity remains constant in the future – meaning the proportion of R&D investments to total investments remains constant through 2021. 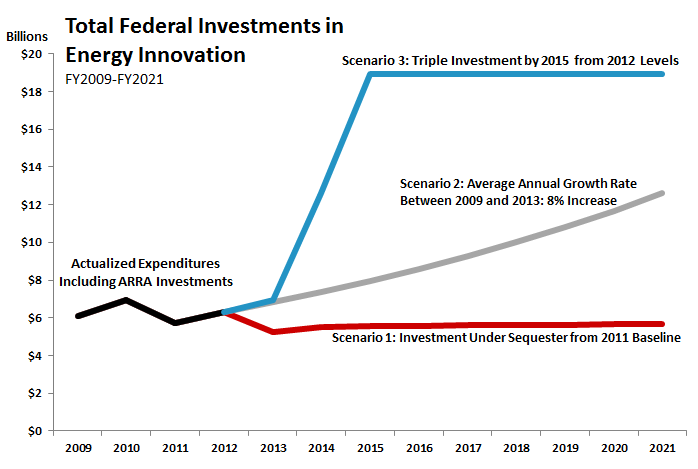 Energy Innovation Under Sequestration. Scenario 1 captures one possible outlook for energy innovation investments under the sequester – a predictably disappointing scenario. Clean energy innovation investments were bolstered by the American Recovery and Reinvestment Act (ARRA) – captured here divided equally over FY2009 and FY2010 – and FY2012 spending levels are estimated to be only slightly lower than this peak. ITIF’s analysis assumes that FY2013 spending will be 8 percent below FY2011 levels (FY2012 investments are not used as a benchmark because they are only estimates, as opposed to actualized spending.) The reduction puts investment $1 billion lower in FY2013 than is estimated for FY2012. Under this scenario, investment remains consistent at $5.5 billion per year from FY2014-FY2021.

Steady Growth: 8 Percent Increase Per Year. The second scenario assumes that investments in energy innovation are unaffected by the sequester, and rise at an average annual rate of about 8 percent per year, which is the actual average annual rate of increase between FY2009 and FY2012. Under this assumption, investments for clean energy innovation would rise to just over $12.5 billion by 2021, nearly $7 billion higher than under sequestration, and the growth in clean energy innovation investment experienced in the last few years could be sustained in the long term. The effects of the sequester on the steady growth scenario would result in total funding losses over the nine year period of $35 billion, reducing GDP by an estimated $56 billion.

Policy Experts’ Recommendation: Tripled by 2015. Scenario 3 assumes an ideal situation, recommended by policy experts, in which clean energy innovation investment s are doubled from FY2012 levels by FY2014 to $12.6 billion, and tripled by FY2015 to $19 billion. Under this scenario, clean energy innovation is funded at a satisfactory level for providing support to the country’s energy innovation ecosystem to induce breakthroughs in technology that can provide energy at cost-competitive rates to current fossil energy. The effects of the sequester on the recommended scenario would generate funding losses of $102 billion, creating a $184 billion GDP loss.

The sequester, if applied evenly to all discretionary programs, will dramatically restrict the growth of the clean energy industry by withdrawing support for innovation, which is necessary to achieve breakthrough improvements in cost-competitiveness and performance of new energy technologies. To see advancements in the clean energy industry, qualify past and current investments in energy innovation worthwhile, and prevent significant losses to GDP, government support for energy innovation must not be retracted.

Megan Nicholson is the clean energy research assistant at the Information Technology and Innovation Foundation. Originally posted on the Energy Innovation Tracker, a database capturing U.S. energy innovation R&D investment since FY2009. For additional analysis, keep an eye on the Tracker’s blog and follow the Tracker on Twitter: @energyrdtracker.