In September 2012 Germany's Environment Minister opened a new lignite power plant, arguing the following: “If one builds a new state-of-the-art lignite power plant to replace several older and much less efficient plants, then I feel this should also be acknowledged as a contribution to our climate protection efforts.”

Peter Altmaier is not alone, recently the climate benefits of Germany's new and apparently ultra-efficient coal power plants have been extolled not only by manufacturers such as Siemens and power companies including RWE, but even some of the German nuclear phase-out's most vocal proponents.

We are also now seeing increasing numbers of people suddenly noticing an uptick in coal power, and deciding it has little to do with Germany's decision to move away from nuclear energy. These arguments require both an alternative arithmetic and an alternative history. Here’s why.

In the aftermath of Fukushima, Germany prematurely shut eight nuclear power plants. Respect for arithmetic and the intelligence of my readers dictates that I do not explain why this should lead to an increase in carbon dioxide emissions. However, the relationship between Germany's nuclear phase-out and the construction of new coal power plants deserves an explanation.

Between 2011 and 2015, Germany will open 10.7 GW of new coal-fired power stations. This is more new coal capacity than was constructed in the entire two decades after the fall of the Berlin Wall. The expected annual electricity production of these power stations will far exceed that of existing solar panels, and will be approximately the same as that of Germany's existing solar panels and wind turbines combined. Solar panels and wind turbines, however, have expected life spans of no more than 25 years. Coal power plants typically last 50 years or longer. At best you could call the recent developments in Germany's electricity sector contradictory. 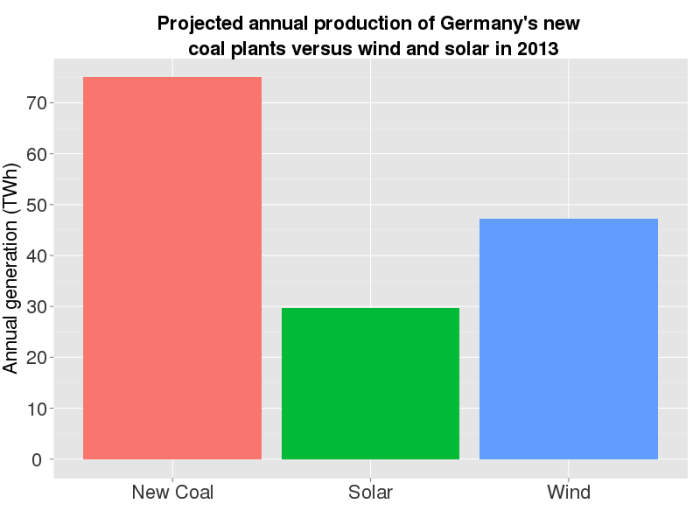 The policy to phase out nuclear power was vital to the decisions to build new coal power plants. Closing down a quarter of your electricity generation leaves a gap that must be filled by something, and Germany realized it would largely have to be filled by one thing: coal. This is more or less beyond doubt because Germany's then Environment Minister Sigmar Gabriel said so. Gabriel, now Germany's Minister for Energy and Economics told climate scientist James Hansen that Germany had to build new coal power plants because of its nuclear phase-out, and stated elsewhere that Germany would have to build eight to 12 coal power plants to replace its nuclear fleet.

And this is exactly what he got. In the first half of this decade Germany will open nine new coal power plants.

Robert Wilson is a PhD student in mathematical ecology at the University of Strathclyde. This post originally appeared on his blog the Energy Transition, which is hosted by the Energy Collective.