How “An Inconvenient Truth” Contributed to Partisan Polarization on Climate

Scroll down to read an update from the authors, written on April 14, 2014

Joe Romm of Climate Progress misrepresented polling data in his critique of our recent New York Times op-ed when he claimed Al Gore and An Inconvenient Truth did not contribute to partisan polarization of public attitudes toward global warming.

Gallup and Pew both find that partisan polarization increased significantly over the two years following the release of An Inconvenient Truth across a range of measures. Between 2006 and 2008, the split between Democrats and Republicans reporting that they personally worry a great deal or a fair amount about global warming rose from 24 percent to 35 percent and on the question of whether the rise in temperatures was primarily due to human activities or natural causes, the split went from 36 percent to 41 percent.

Beyond Pew and Gallup, many scholars have concluded that Gore’s movie did in fact drive increasing polarization. Anthony Leiserowitz, a Yale University researcher, told an interviewer this week:

"We actually studied this: What was the impact of An Inconvenient Truth? What we found is that a remarkable number of people saw the documentary and were moved by it … But viewers also tended to be liberal Democrats with higher education, to be women, and so on… But for every person the movie engaged, there were at least as many who were turned off because they disliked Al Gore long before An Inconvenient Truth … And we still see that in our research today: Many ‘Dismissive’ — when they think of global warming, they think of Al Gore, feel intense dislike, and thus disregard his message."

By contrast, Romm references three studies, none of which conclude what he claims they do. The first combines responses to several questions about global warming asked by Gallup between 2001 and 2010. It finds, as noted above, that the split between Democrats and Republicans grew significantly between 2006 and 2008, just as we claimed. 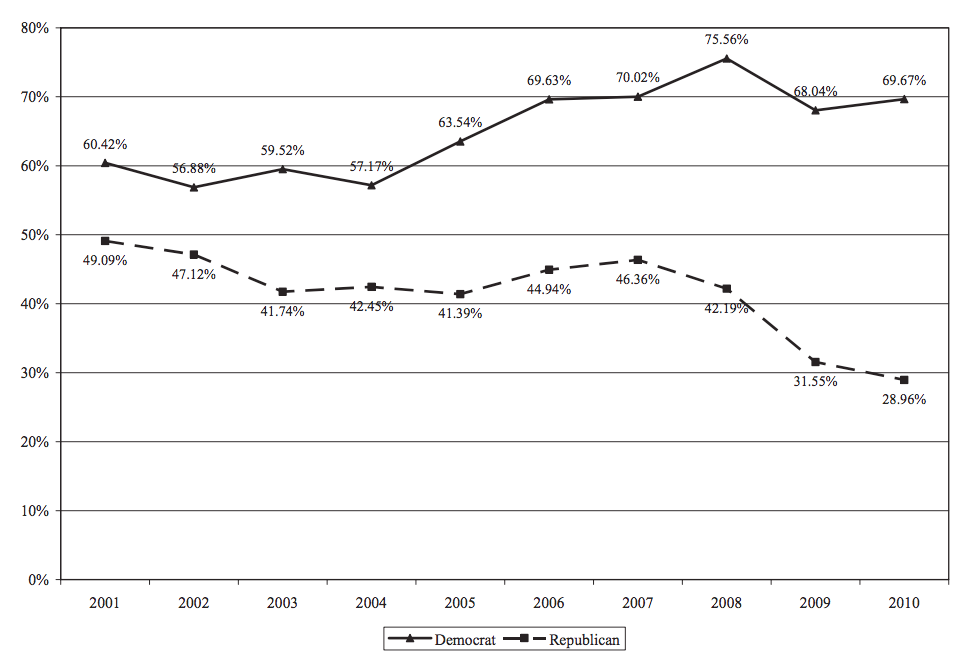 But that’s not actually the chart that Romm posted. Instead, he posted a chart tracking the differences between self-identified liberals and self-identified conservatives. That chart shows polarization beginning earlier. 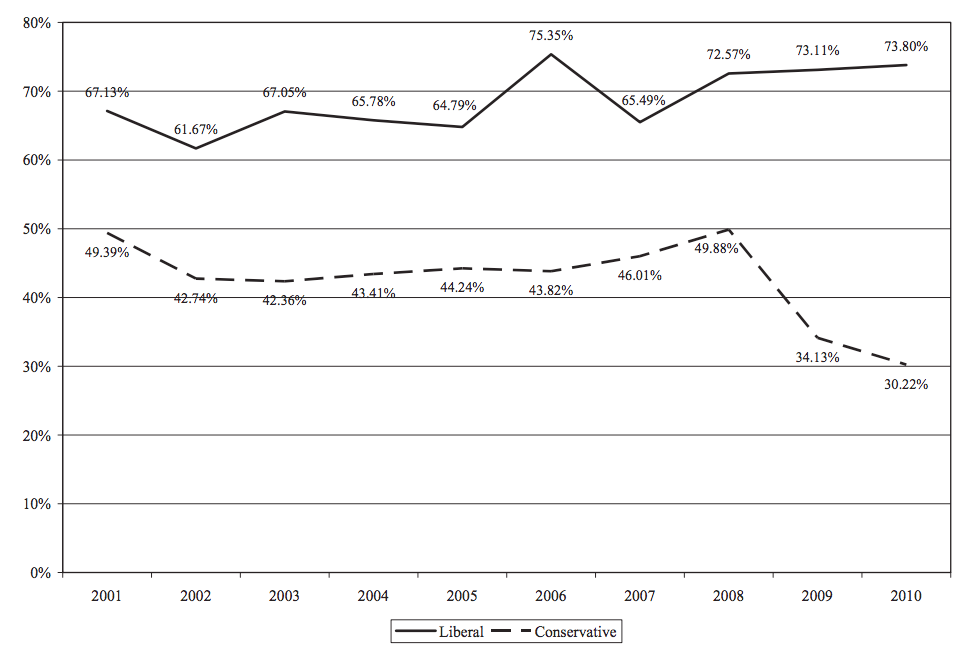 The difference illuminates an important difference, one that Romm elides rather than illuminates. The split among party elites happened earlier and drove the split among rank and file Democrats and Republicans, a dynamic that the authors conclude has been the central dynamic driving the rising polarization of the issue.

Little surprise, then, that the release of a major documentary, heavily promoted in the media, featuring a famous partisan and former Democratic presidential nominee using highly loaded language about the issue – Hurricane Katrina was like a “nature walk through the Book of Revelations” – and making strong claims about the implications for Americans – “we are going to have to change the way we live our lives” – would prefigure a rise in polarized opinion among self-identified Democrats and Republicans in the years that followed.

Romm then claims we misrepresent a 2010 study which found that “dire warming” messages decrease support for climate action because the same study finds that when such messages are paired with solutions, they increase belief in climate science. In fact, our op-ed explicitly addresses this dynamic. “What works, say environmental pollsters and researchers, is focusing on popular solutions.” And the popular solution that the 2010 study tested was of “technological ingenuity” — the very thing the two of us and Breakthrough have advocated since 2002.

Moreover, clean energy solutions are popular with the public irrespective of whether fear-based messages about climate change are offered alongside them. In this regard, climate concerns are just one among many reasons that the public supports policies designed to develop cleaner energy technologies, alongside a range of non-climate related economic, social, and environmental considerations.

Our oped also cited the work of Daniel Kahan and colleagues, which finds that the nature of the solutions offered matters. When Kahan’s team primed respondents by first having them read an article about carbon regulations as the solution to climate change, polarized views of climate science were significantly higher than the control condition, in which respondents read an unrelated article. By contrast, when respondents read articles about geoengineering or nuclear energy as key climate solutions, views were less polarized. In short, when the climate agenda is narrowly focused on carbon caps and renewable energy subsidies, and excludes solutions conservatives tend to support (eg, nuclear energy), it increases rather than decreases polarization.

Offering solutions clearly helps overcome fatalistic and skeptical responses to fear-based climate messages. But when those solutions conflict with the recipient’s underlying ideological orientation, they polarize. In our oped, we cite a Nature Climate Change study which concludes, “Broadening the debate to encompass outcomes that are related to deniers' willingness to act … may be more likely to foster the widespread consensus and support that governments need to enact effective mitigation policies.”

The third study Romm cites makes no particular claim about the relationship between An Inconvenient Truth and polarization. But it does, ironically, quite explicitly debunk Romm’s longstanding claim that more media communication linking extreme weather and natural disasters to climate change will result in policy action. Brulle and colleagues conclude:

The implication would seem to be that a mass communications effort to alter the salience of the climate change issue is unlikely to have much impact … this analysis shows that these efforts have a minor influence, and are dwarfed by the effect of the divide on environmental issues in the political elite [emphasis added].

In other words, mass communication efforts are unlikely to raise the salience of global warming and, to the degree that those same efforts increase elite polarization, they are likely to be counterproductive. This is precisely what An Inconvenient Truth, by most scholarly accounts, did.

And this is what the producer’s of Showtime’s Years of Living Dangerously, with its heavy dependence on liberal celebrities, catastrophic messaging, and dearth of solutions, appear to have entirely failed to learn.

Paul Thacker and Jim Naureckas have posted further critiques of our New York Times op-ed. Both largely repeat Romm's talking points from Thursday, with Naureckas providing a fine example of how closely tied green apocalyptic messaging is to the long-standing dream of running the world entirely on renewable energy sources.

Thacker quotes from a series of articles we have written over the last seven years about the legacy of An Inconvenient Truth, claiming we have contradicted ourselves. However, even a close reading of the quotes Thacker posted reveals that’s not the case. We have claimed, in 2007 and again in 2009, that Gore's movie did little to raise the salience of the issue among the public. This is demonstrably true. The number of Americans who believed that global warming is happening or will happen during their lifetime was 65 percent in 1998. It was 73 percent in March 2006, before An Inconvenient Truth was released, 75 percent in March 2008, and is today again 65 percent. The number of people believing that global warming will pose a serious threat to their way of life was 25 percent in 1998. By March 2006 it had risen to 35 percent. In March 2008 it was 40 percent, and today it is once again 36 percent.

Thacker quotes Robert Brulle and Aaron McCright, who claim, "No reputable researcher would claim that Al Gore contributed to partisanship on climate." But in the post above, we quote a highly reputable researcher, Yale University's Anthony Leiserowitz, who claims that Gore contributed to partisanship on climate change. A range of other scholars have reached the same conclusion (see Nisbet; Hoffman).

Even McCright, in the conclusion to his polarization study, reaches a conclusion that is difficult to reconcile with the claim that Gore's movie did not contribute to polarization: "Current flows of political messages and news concerning global warming are likely contributing to the growing divide. Americans’ political orientations moderate educational attainment and self-reported understanding in ways consistent with the predictions of the elite cues hypothesis and information-processing theory. Given the bifurcated flow of conflicting information on global warming from elites on both sides of the political spectrum, ideological, and partisan camps in the general public likely receive very different information on global warming—in ways that reinforce their existing political differences."