A reversal in the International Energy Agency’s views on energy efficiency suggests that as much as 2,176 million tons of oil equivalent worth of extra clean energy consumption will be required by 2035 to meet the organization’s aggressive climate targets. That’s the equivalent of 19 Australias’ energy consumption. This finding is the result of a Breakthrough analysis of a new IEA report, which showcased a new position for the agency on what energy experts call “rebound effects” – a hotly contested phenomenon in energy consumption growth.

The new report marks a major institutional leap forward for the IEA, which until last month had downplayed rebound effects both quantitatively and discursively. IEA publications – including their regular and widely read World Energy Outlook and Energy Technologies Perspective – have long emphasized the leading role that energy efficiency can play in reducing global carbon emissions, contributing “about 40% of the CO2 abatement needed by 2050” according to the new report. But such claims were made with the support of modeling that assumed rebound effects totaling only 9 percent on average (WEO 2012, page 316), far below levels identified by the academic consensus – a consensus that now includes the IEA itself.

The new report – titled “Capturing the Multiple Benefits of Energy Efficiency” – concludes that efficiency rebounds can and do reach at least as high as 60%, with rebound in developing countries likely much higher than in rich countries. This is consistent with literature reviews published by the Breakthrough Institute, the European Commission, the UK Energy Research Center, and other leading energy research institutions and experts.

But while the new report converges with the academic consensus on rebound effects, that consensus has yet to infiltrate IEA’s modeling. In the following analysis, we see that the implications of IEA’s reversal are highly significant for their own modeled energy consumption projections. 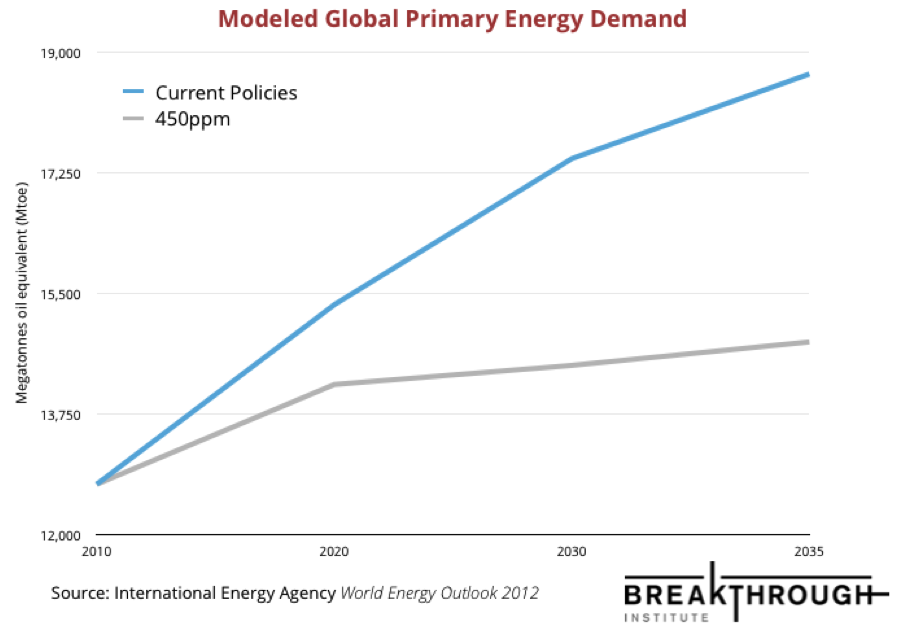 But this projection still relies on old IEA assumptions of 9% rebound, assumptions that IEA itself now acknowledges are inappropriate. What happens when more appropriate assumptions are used? To comport IEA’s new estimates of rebound effects with their modeling, we can plug a more representative range of rebound effects into IEA energy consumption projections. If globally averaged rebound effects are limited to 20%, then 2035 TPED reaches 15,220 Mtoe in 2035. This is 469 Mtoe higher than the base 450 Scenario conclusion, or a difference approximately equal to 4 Australias’ worth of energy consumption. If global rebounds are 60%, 2035 TPED is 16,773 Mtoe, or 2,176 Mtoe greater than the base 450 Scenario. That’s the same energy consumption as 19 Australias, or approximately the consumption of the entire EU-15, plus Russia. 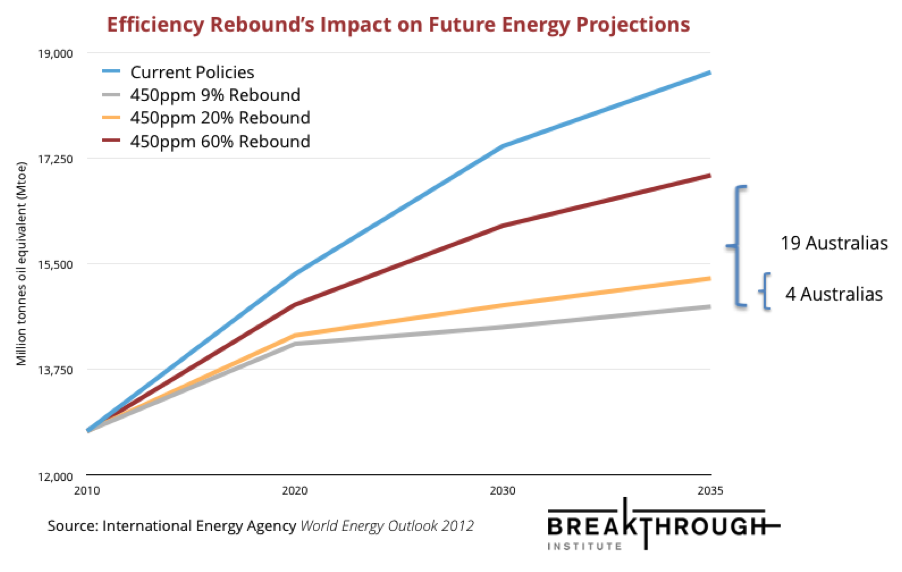 Furthermore, it’s likely that realized rebound effects will be at the high end of this 20-60% range, since most of the modeled demand reductions in the WEO 450 Scenario come from the developing world. Of the 3,883 Mtoe demand reduction achieved below business-as-usual by 2035, 3,006 Mtoe come from non-OECD countries. That’s 77% of the demand reduction. Rebound effects in the developing world, especially at the national or economy-wide level, have garnered relatively less study than sectors like final energy demand in rich countries. But there’s a virtually unanimous consensus in the literature that rebound is likely to be significantly higher in emerging economies, where demand is far from saturated and efficiency improvements make energy cheaper and more useful for accelerated industrialization and economic growth.

The new report should be applauded for its efforts to include both quantitative and qualitative discussion of rebound effects. As the report notes, rebound effects are generally neither a negative impact of efficiency nor a reason not to pursue energy efficiency improvements. But accounting for rebound is absolutely essential for future projections of energy use, especially when those projections are used by governments for use in energy and climate policy making.

The IEA report includes a comprehensive and nuanced discussion of rebound in its various contexts, including direct, indirect, and macroeconomic rebound effects. Citing respected literature reviews by the UK Energy Research Center (UKERC), the European Commission, and the Breakthrough Institute, IEA observe that direct rebounds in rich countries can range from 0% to 65%, and “tend to converge between 10% and 35%.” In their discussion of national-level and macroeconomic rebound effects, the report cites work by Barker et al (2009) using IEA modeling data that finds global average economy-wide rebound effects will reach approximately 31% by 2020 and 52% by 2030. As the report notes, it is likely that this global average will be balanced by relatively lower rebounds in rich, demand-saturated countries and relatively higher rebounds in industrializing poor and middle-income countries.

The institutional progress on display at the IEA follows a similar evolution at the Intergovernmental Panel on Climate Change (IPCC), which in the spring of this year included a substantial discussion of rebound effects in their Fifth Assessment Report. In AR5, the IPCC wrote that “rebound effects, particularly in emerging economies, mean consumers and firms are using energy efficiency to enhance economic welfare, getting more energy services out of the same or less overall energy use. That’s fundamentally a good thing.” The IPCC review reported a range of rebound effects between 20 and 60 percent, the same as another literature review published in Nature last year by Kenneth Gillingham and coauthors.

As the IEA report correctly observes, there remains much work to be done in incorporating rebound effects into long-term projections of national and global energy demand. In particular, modeling efforts should aim for highly disaggregated estimates of rebound effects, from end-use consumption to economy-wide effects at various levels of development. Models must also consider the dynamic relationship between different types of rebound responses – take-back effects, spending effects, investment effects, macroeconomic price responses, etc. – and other energy and climate policies, including emissions pricing.