Is Coal Really “Peaking” in China?

“While uncertainty over the changes in coal stockpiles still exists, we’re confident that the unbelievable may be at hand: peak coal consumption in China.” So concludes a recent blog post from the Sierra Club’s Justin Guay and Greenpeace International’s Lauri Myllyvirta, the latter of whom recently published an analysis suggesting that Chinese coal consumption dropped in the first half of 2014: 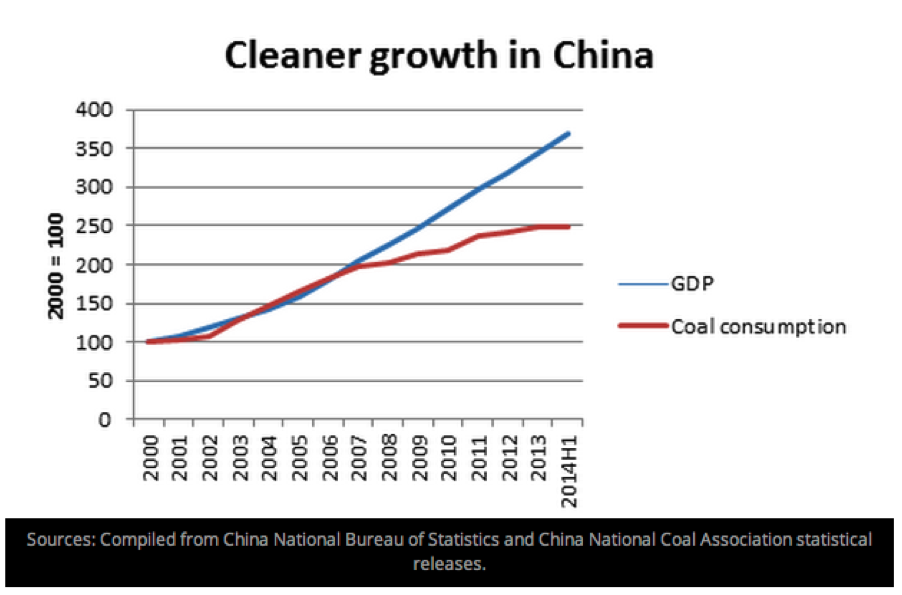 What does this recent (possible) dip auger for future emissions and energy trends in China? I think it’s safe to say the answer is far more complicated than “clean energy is the future,” as Guay and Myllyvirta write at the end of their post.

First things first: it’s far from agreed upon that coal consumption has peaked in China. The International Energy Agency does not expect Chinese demand to peak this decade. The US Energy Information Administration projects Chinese coal consumption rising through 2035. Wood Mackenzie expects coal consumption in China could double by 2030. And Bloomberg New Energy Finance, despite a bullish posture towards renewables, expects China to add between 340 and 450 gigawatts of coal-fired power plants over the next 15 years – an addition larger than all of America’s coal plants combined.

And yet, there are signs that growth in Chinese coal consumption could be slowing considerably. Capacity expansion has dropped from about two coal plants built every week over much of the last decade to only about one per week today, as moderating economic growth has partially decoupled from the build-out of industrial coal-fired power. More important, however, are the concerted efforts that Chinese government officials are taking towards a diversification of energy resources in their country and attempts to clean up the horribly polluted air in cities run by coal plants.

There is good news for zero-carbon energy innovation coming out of China. Nowhere in the world are nuclear power or carbon capture advancing at a faster clip. China continues to expand its wind base and has moved aggressively to deploy solar PV – most likely in response to massive overcapacity that plagued the Chinese solar industry as recently as last year.

But it’s arguable that the most significant effort to transition away from coal is a transition towards natural gas. Chinese gas imports have ballooned since 2009, and major investments are being made to replicate the shale gas boom that America is still enjoying. The EIA expects Chinese gas consumption to rise from 4.9 percent of total energy consumption in 2012 to 10 percent by 2020. While water resources and geologic considerations make shale gas production in China difficult, it is estimated that the country has the largest domestic gas reserves in the world.

So if China is actively looking for a coal killer, it’s likely the same one found in America: natural gas. On the face of it, this transition is highly pragmatic (in the Climate Pragmatism sense of the word): moving from higher-carbon, dirtier energy sources to lower-carbon, less polluting ones in service of multiple policy objectives (in this case, both cleaner air and reduced greenhouse emissions).

Except that China’s move away from coal may not actually bring lower emissions. Two major strategies for reducing coal smog in cities are to simply move coal plants farther inland, away from population areas; and to deploy a new fleet of advanced coal gasification plants, which would supply synthetic gas with an even higher carbon intensity than coal. Neither of these initiatives would reduce, and would actually likely increase, net carbon dioxide emissions.

Even if Chinese coal capacity stops growing soon, its existing coal plants will continue spewing out carbon pollution for decades to come. Last year, the Clean Air Task Force’s Armond Cohen and Kexin Liu pushed back on similar claims about “peak coal,” suggesting that a “long, high plateau” was much more likely. And this week, Environmental Research Letters published a widely covered paper by Steve Davis and Robert Socolow finding that Chinese fossil plants will ultimately be responsible for 42 percent of all global future emissions.

It would be nice to be convinced that China has decoupled its economic growth from coal, and that other countries can follow suit. Unfortunately for the global climate, that simply doesn’t appear to be the case. The paths to decarbonization – and the answer to the billions of people whose economies will urbanize and industrialize by midcentury – could very well come from China, where nuclear, CCS, and renewables are also growing quickly. But wishing won’t make it so.