What if Iceman from the X-Men could put a frozen ice wall around the crippled Fukushima Daiichi nuclear power plant so that no radiation could get out? I’d be all for it.

For the past three years, the Tokyo Electric Power Company (Tepco) has faced an uphill battle of restoring public trust in their ability to manage the ongoing cleanup of the crippled Fukushima Daichi plant.

The latest effort is a mile-long subterranean ice wall that would encircle the nuclear plant and prevent any water from getting in or out of the site. A series of pipes, installed 100 feet into the ground, would pump refrigerant liquids at -40 degrees Celsius through the pipes, freezing the surrounding soil and water into a watertight 10-foot thick ice wall.

The hope is that the ice wall will prevent an estimated 400 tons of groundwater from flowing into the plant’s contaminated buildings every day. Tepco already has installed more than 1,000 large aboveground tanks to store contaminated water for treatment. But the tanks are running out of room and, as was the case last August, some of them are leaking. Dealing with the ever-growing volumes of contaminated water is the one of the greatest challenges for Tepco’s cleanup. 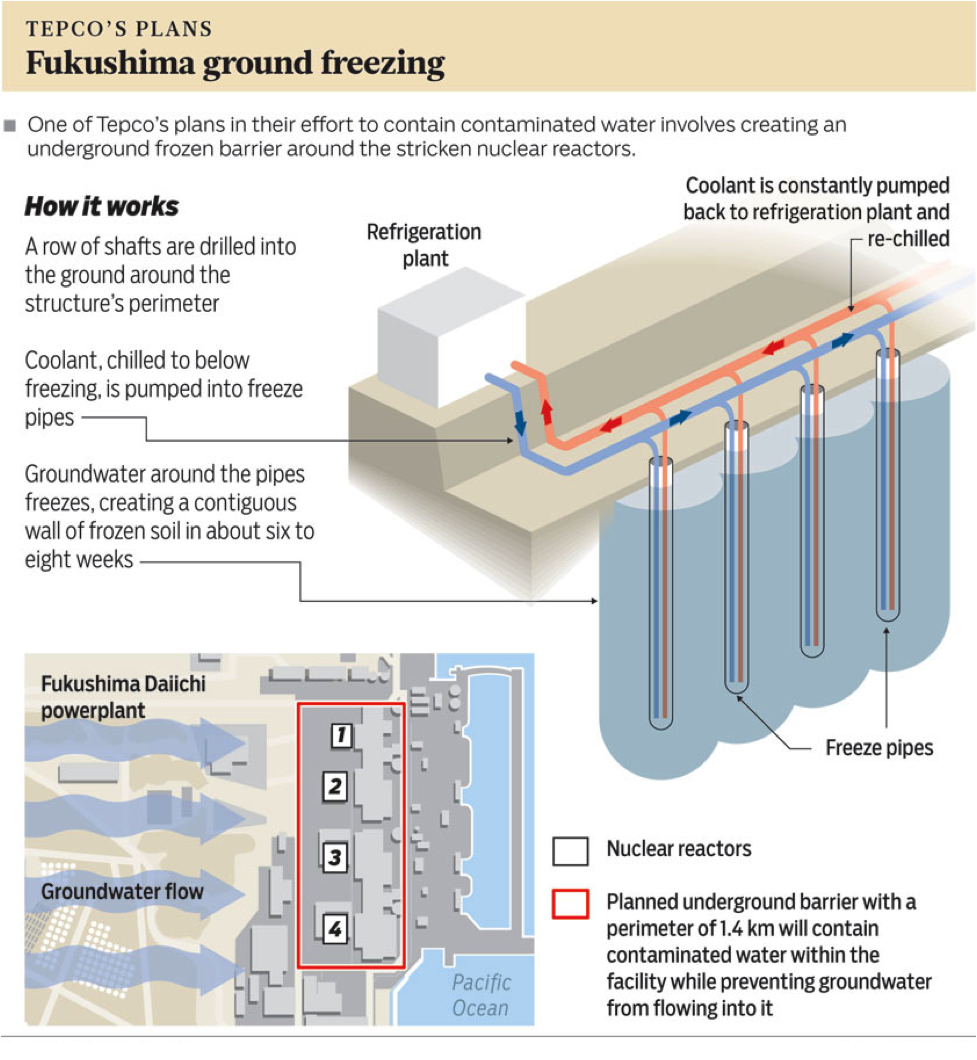 A ‘subsurface cryogenic barrier’ may seem like a futuristic technology, but it’s actually an old one. Ice walls have been used in mining and construction since the 19th century, and three of the largest, most complex construction projects in history, in Boston, New York, and London, used ice walls extensively.

But their use for holding back contaminates and waste is more recent. The Fukushima ice wall will be huge, will cost about $400 million to emplace, and will require enough electricity to power 13,000 homes in Japan, or about $20 million a year, just to keep it frozen for the many years it will be needed.

This begs the question: why is a 19th-century technology the chosen path for securing the Fukushima Daichi nuclear power plant?

From an engineering perspective, many scientists are skeptical that an ice wall at this scale will work because of the heterogeneity of the soil over such a large area. The soils around Fukushima are a combination of Andosol, Fluvic, and Peat, and the amount of energy needed to freeze each type depends on a detailed understanding of their distribution beneath the reactor site.

The conductivity of water and heat in soil depend on the nature, size, and number of the pores (porosity), the connectivity of those pores (permeability), and the thermal properties such as heat capacity and thermal conductivity. Usually, one simply keeps pumping in coolant until the whole thing freezes, hoping that our estimates of the subsurface properties aren’t too far off.

Furthermore, the water content is high in the soils below Fukushima because it is located on the coast and the water table is close to the surface. This complicates matters because the greater amount of flowing groundwater that carries warmer water in and around the pipes, the more energy and time it takes to freeze the subsurface.

But the two most important advantages of an ice wall are: 1) it is completely reversible and 2) has almost no environmental footprint. In fact, this strategy can be stopped at any time with no lasting effect. The ice just melts away.

This may be a good thing, since just two months into construction, the ice wall has faced its share of difficulties. So far, Tepco has had trouble getting temperatures low enough to begin freezing the water in a trench running from a turbine building to the sea, let alone cold enough to maintain its temperature across the length of the pipes.

Recently, Japan’s Nuclear Regulatory Authority cast doubt on Tepco’s handling of the project, and instructed it to “double or triple” the freezing capacity of the pipes. Tepco responded confidently, saying that the company has turned a corner and is on schedule for completion by March 2015. I hope it works.

But an even more pragmatic solution exists. Prior to when the ice wall was approved, and around the time the storage tanks were discovered leaking, there was the argument that neither an ice wall, nor any additional technological fix, was needed. A delegation from the International Atomic Energy Agency visited the site in 2013 and concluded that the risk of treating the water and letting it go out to sea was lower than the risks of trying to store it in tanks and treat it later.

The argument is that even if all the waste from Fukushima were dumped into the Pacific, dilution would eliminate any radiation risks, especially to distant countries like the United States. Geraldine Thomas of the Imperial College London says, “The ocean would be the safest place for the waste water.”

If the radioactive water stored in the tanks and in the groundwater were allowed to just go into the ocean, the effect would be dominated by tritium, the radionuclide of highest concentration in this water (630,000 Bq/liter) and one that cannot be removed by Tepco’s advanced water treatment system.

Releasing this Fukushima water to the Pacific would not raise the concentrations off the coast anywhere near anyone’s limit because the dilution factor is enormous and the convective mixing near-shore is fast compared to the groundwater flow rate at which the water enters the ocean. This is also why the saltiness of ocean water doesn’t change as groundwater leaks into it.

There is no medical evidence of tritium causing cancer at any levels that could come out of Fukushima into the ocean. Our present drinking water limit for tritium, 740 Bq/liter, was set in 1976, and was not decided by any health-based understanding, but from the fact that no one could imagine any drinking water reaching this limit. Canada’s limit is 7,000 Bq/liter, and Japan’s limit for releasing tritiated water to the environment is 60,000 Bq/liter, so the US limit is pretty conservative.

Tritium is not fat- or bone-seeking like other radionuclides or chemicals like fluorine and mercury, so it does not bioaccumulate in fish. Simple bio-uptake would not concentrate tritium in fish to any level of concern. But local fisherman in Japan think dumping the treated water would cripple their industry, so the Japanese government is not considering the plan at this time, and instead is looking to Iceman to show some strength. Perhaps a fraction of the cost of emplacing the ice wall would be better spent subsidizing the local fishing industry while releasing this water to the ocean like most experts agree.

To make discharging the treated water into the Pacific Ocean politically acceptable would require much more transparency and communication with the local populations on the relatively low risks of the plan. But those are precisely the two attributes Tepco has been harshly criticized as not possessing throughout the handling of the Fukushima disaster. And Tepco’s recent announcement that the company is back on track with the ice wall is likely viewed with a good dose of distrust.

In an independent investigation of the lead-up and aftermath of the Fukushima accident, Japan’s top scientists and academics found that the biggest problem behind the meltdowns was not technological, but Japan’s “nuclear village” culture, wherein “regulators pretended to regulate, [and] operators pretended to be regulated.”

When the meltdowns occurred, the nuclear safety myth –– as maintained by Tepco, regulators, and the government –– was shattered. Skepticism about the use of nuclear power ran high among Japanese people after the accident, in large part due to deep suspicions about the close relationship between the utilities and the government and the lack of communication with the public.

To regain public confidence, Tepco may be simply taking the course of “actions speak louder than words,” appearing to do something, no matter whether it is technically the right thing, and no matter how much money is spent that could have been spent on more pressing matters.

An ice wall, at least politically, may be the easier solution. Absent a clear, compelling conversation about the relative risks of the contaminated water, dumping the water into the ocean could easily be perceived as a morally irresponsible act. But adding on technological solutions could bury the problem deeper.

“Indeed, there is a risk that relying excessively on technological fixes could give rise to a new ‘nuclear safety myth,’ recently argued Christopher Hobson in the Asia-Pacific Journal.

If the ice wall and other engineering projects encounter extended complications, the public will have only further reason to oppose nuclear and distrust the utilities. The consequences of these efforts are real. Environmentalists hoped that Japan would move from nuclear to renewables, but that has not panned out, and in the past 13 months, to compensate for the nuclear shutdown, coal, oil and gas use in Japan has soared.

Maybe we need another superhero to intervene, one called Science Man.

James Conca has over 30 years of experience as a scientist specializing in geologic disposal of nuclear waste, energy-related research, subsurface transport, and environmental clean-up of heavy metals. He is a regular contributor to Forbes.