No Solar Way Around It

Why Nuclear Is Essential to Combating Climate Change

Nobody who has paid attention to what's happened to solar panels over the last several decades can help but be impressed. Prices declined an astonishing 75 percent from 2008 to 2012. In the United States, solar capacity has quintupled since 2008, and grown by more than 50 times since 2000, according to US Energy Information Administration data. In 1977, solar panels cost $77 per watt. Today, they are less than a dollar per watt.

So it came as a shock to many and an offense to some to learn that new nuclear plants still cost substantially less than solar. Solar advocates have challenged our recent analysis finding that the electricity from Finland's beleaguered Olkiluoto plant is still four times cheaper than electricity from Germany's solar program, claiming that we cherry-picked cases to make nuclear look good and solar look bad.

It is an odd objection, given that we selected perhaps the most expensive nuclear power plant ever built for our comparison. The complaint is odder still because many of the same critics who accused us of cherry-picking then turned around and, without any apparent irony, cherry-picked small, one-off solar projects as evidence that our analysis is slanted toward nuclear.

The reason we compared the Finnish plant to the German solar program is not just because renewables advocates have long claimed that the two examples prove that solar is cheap and nuclear is expensive. We also compared the two because both projects exist in the real world at significant scale, which helps avoid the cherry-picking problem of overgeneralizing from particular cases. Thanks to generous subsidies, Germany generated 5 percent of its electricity from solar last year — a huge amount compared to other nations. By contrast, last year the United States produced just 0.18 percent of its electricity from solar, according to the EIA.

Some have reasonably asked if there aren't broader surveys of the costs of new solar and new nuclear. There are. Both the International Energy Agency and the EIA have done them, and both find that solar costs substantially more than new nuclear construction.

While those figures represent the cost of the average solar installation today, they don't tell us what it costs for a major industrial economy to scale up solar rapidly, such that it gets a significant percentage of its electricity from solar. To date, Germany is the only major economy in the world that has done so. The costs of Germany's solar feed-in tariff represent the only real world figure we have.

As solar has scaled up in Germany, the costs have declined. But the dynamics are not dissimilar with nuclear. France saw significant cost declines as it scaled up standardized plant designs in the 70s and 80s. The new plant in Finland is a first-of-kind design. Subsequent builds are already showing significantly lower costs. The EPR under construction in France, initiated around the same time as the one in Finland, is expected to cost slightly less. The third and fourth versions of the EPR, currently under construction in China, will be a third the cost of the Finnish plant.

Had we chosen to use the two new Chinese plants, solar would have cost twelve times more than nuclear, rather than just four times more. Of course this comparison would almost certainly have raised further objections that we had compared German apples to Chinese oranges. Yet it turns out that the German solar program has benefited enormously from the scaling up of Chinese solar manufacturing — or in the eyes of the US Solar Energy Association, the US Trade Commission, and the European Union, the outright dumping of solar panels by Chinese firms. Indeed the flood of Chinese solar panels, which take up as much as 80 percent of market share in Europe, has depressed the cost of solar panels by as much as 88 percent according to EU officials.

Surely, if it is appropriate to tout solar cost reductions that have been driven by Chinese mercantilism and industrial policy it is also appropriate to consider the cost benefits that Chinese manufacturing and construction costs are bringing to nuclear ­— even more so given that the vast majority of future carbon emissions will come from places like China, not Finland or Germany.

Our analysis was further biased toward solar over nuclear by not accounting for the high costs of backing up and integrating intermittent solar electricity. Leading anti-nuclear greens, including Bill McKibben and Robert F. Kennedy Jr., note that for a few hours during a sunny weekend day, solar provided 50 percent of Germany's electricity; at the same time, as we pointed out, only five percent of the country's total electricity came from solar in 2012. What that means is that if Germany doubled the amount of solar, as it intends to do, there might be a few hours or even days every year where the country gets 100 percent of its electricity from solar, even though solar only provides 10 percent of its annual electricity needs.

What happens beyond that is anyone's guess. Some say Germany could sell its power to other countries, but this would mean other countries couldn't move to solar since Germany would provide electricity at the same hours it would seek to unload it on their neighbors. Solar advocates say cheap utility-scale storage is just around the corner; in fact, choices are extremely limited and expensive. As a result, analysis by the Clean Air Task Force suggest that integration costs for solar and wind are likely to surge dramatically should renewables rise much above 20 or 30 percent of total electrical generation (see graph below). 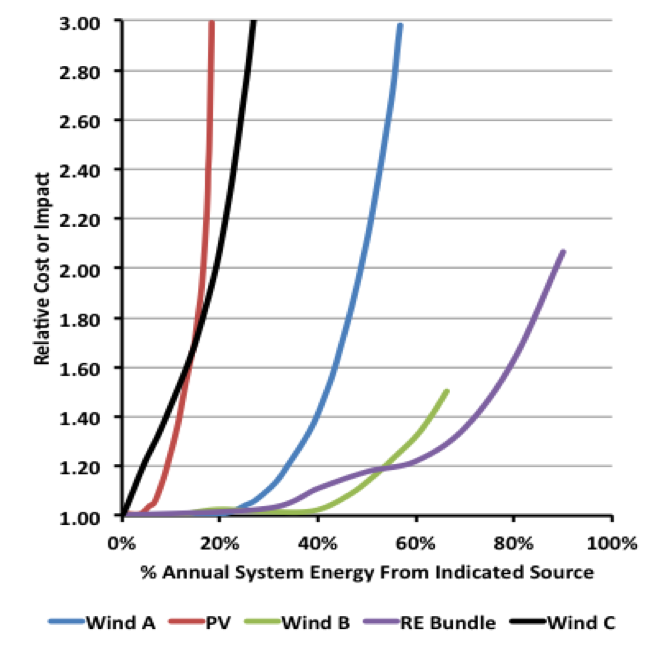 We do not present this evidence to advocate against solar subsidies or Germany's program. We have long advocated that governments spend significantly more on energy innovation, including the deployment of solar panels. But it's one thing to endorse Germany's big investment in solar in the name of accelerating solar innovation, and it's quite another to claim — as McKibben, Kennedy, and environmental groups do — that Germany's solar program and increasingly cheap solar panels demonstrate that solar energy is ready to scale, capable of substantially displacing fossil energy, and a viable alternative to nuclear.

In reality, there's little evidence that renewables have supplanted — rather than supplemented — fossil fuel production anywhere in the world. Whatever their merits as innovation policy, Germany’s enormous solar investments have had little discernible impact on carbon emissions. Germany’s move away from baseload zero-carbon nuclear has resulted in higher coal consumption since 2009. In 2012, Germany's carbon emissions rose 2 percent.

Nuclear, by contrast, replaces fossil energy. A recent analysis by the Business Spectator’s Geoff Russell finds that big nuclear programs around the world have shown the ability to scale up three to seven times faster than Germany's vaunted Energiewende (see below). In 1970, fossil fuels supplied roughly two-thirds of France’s electricity, with the balance mostly coming from hydro. By 1990, fossil’s share of the electricity supply had dropped to 10 percent, according to EIA data, while nuclear supplied 80 percent, an energy mix that still holds today. As a result, France’s electricity sector emits 80 grams of CO2 per kWh, compared to Germany’s 450 grams CO2 per kWh. Sweden and Ontario, which also have large shares of nuclear in their electricity supply, augmented by large hydro projects, are even lower. 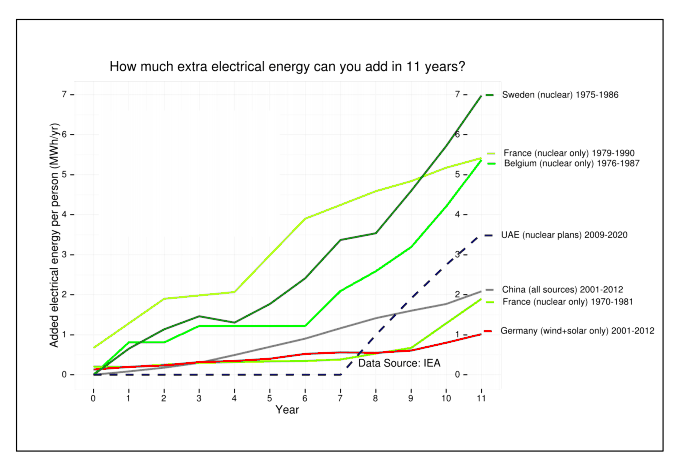 In the United States, nuclear power grew from supplying zero percent of US electricity in 1965 to 20 percent in 1990. Over that same period, coal generation remained flat, rising from 54 percent of generation in 1965 to 60 percent in 1990, during a period when total electricity demand roughly tripled. Since the early 1990’s, when the US nuclear build-out stalled, the vast majority of new US electricity demand has been met by coal and gas.

Even so, nuclear still needs to get better and cheaper if it is going to displace fossil energy at any scale that will make much difference in terms of climate change. Next generation plants that are safer, cheaper, and more reliable will be necessary if nuclear is to be more than a hedge against fossil energy in the developing world and to see significant new deployment at all in the developed world. Solar, wind, and energy storage technologies will need substantial further advances if they are going to even begin to achieve the scale possible with present day nuclear.

Our analysis serves a broader point: we must reject technology tribalism if we are to meet rising energy demand and combat global warming. This entails paying close attention to the substantial challenges emergent technologies face, not ignoring them, and discerning how far different technologies are from being capable of replacing fossil energy. The question is not whether solar is the solution, or nuclear. The question is what technologies will deliver clean, reliable, and cheap energy to a growing population, and what it will take to get those technologies to scale. Any movement serious about addressing climate change will thus be characterized by a broad commitment to innovation and a willingness to take a hard, non-ideological look at present day zero-carbon technologies.