Nuclear and Gas Account for Most Carbon Displacement Since 1950

A new analysis finds that the vast majority of the carbon dioxide emissions associated with America’s carbon intensity decline since the mid-1900s can be attributed to the increasing shares of two energy sources: nuclear fission and natural gas. These two fuels have done more than any others to displace coal, and have saved the country 54 billion tonnes of carbon dioxide emissions since 1950. By comparison, in 2012 the entire world energy sector emitted 35 billion tonnes of carbon dioxide.

The Kaya identity, developed by Japanese economist Yoichi Kaya in the early 1990s, states that the total carbon dioxide emissions of an economy can be expressed as the product of four inputs: population, per capita gross domestic product (GDP), energy use per unit of GDP, and the carbon emissions per unit of energy consumed. The third and fourth terms are known as “energy intensity” and “carbon intensity,” respectively.

It is generally acknowledged that, in order to reduce carbon dioxide emissions, policy makers will need to focus on reducing the latter two terms of the Kaya identity, energy intensity and carbon intensity, rather than on population and GDP. Energy intensity improvements can be achieved by making an economy more energy efficient (more economic output per unit of energy consumption) and by switching from energy intensive industries (such as manufacturing) to less intensive ones. Carbon intensity improvements are achieved by switching from energy sources that emit a lot of carbon (eg, coal) to ones that emit less carbon (eg, natural gas) or no carbon (eg, nuclear, hydro, wind, solar). 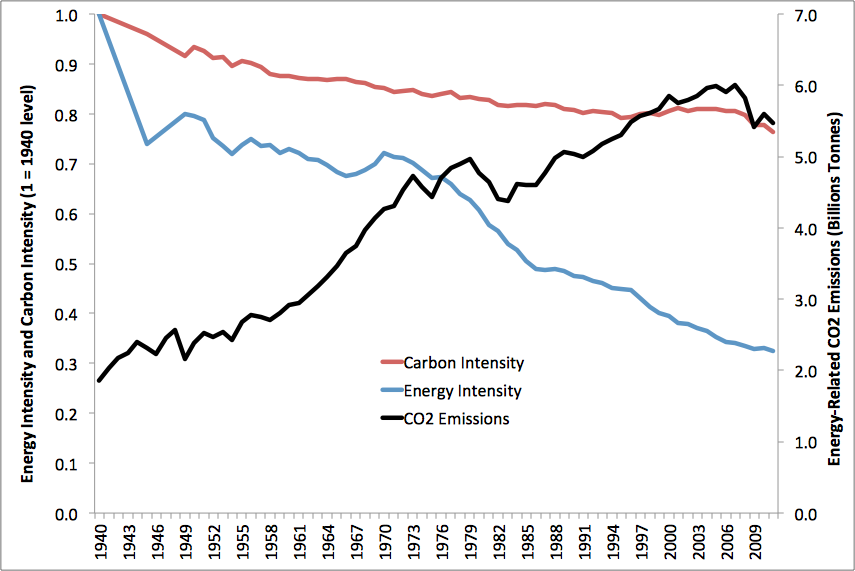 But what if the US economy hadn’t shifted from one that burned a lot of coal and oil to one that burned significantly less coal, and used much more natural gas, nuclear power, and renewable energy? In other words, what would the nation’s carbon dioxide emissions be today if the fuel mix had remained at its relatively dirty 1940 proportions? As the graph below shows, keeping carbon intensity constant at its 1940 levels and allowing population, per capita GDP, and energy intensity to progress as they actually did through time, today’s annual carbon dioxide emissions would be 1.7 billion tonnes greater than actual annual emissions. The area between these two lines, which is about 58 billion tonnes of carbon dioxide, is the amount of carbon dioxide emissions that we’ve avoided by switching to cleaner energy sources over the last 60 years. 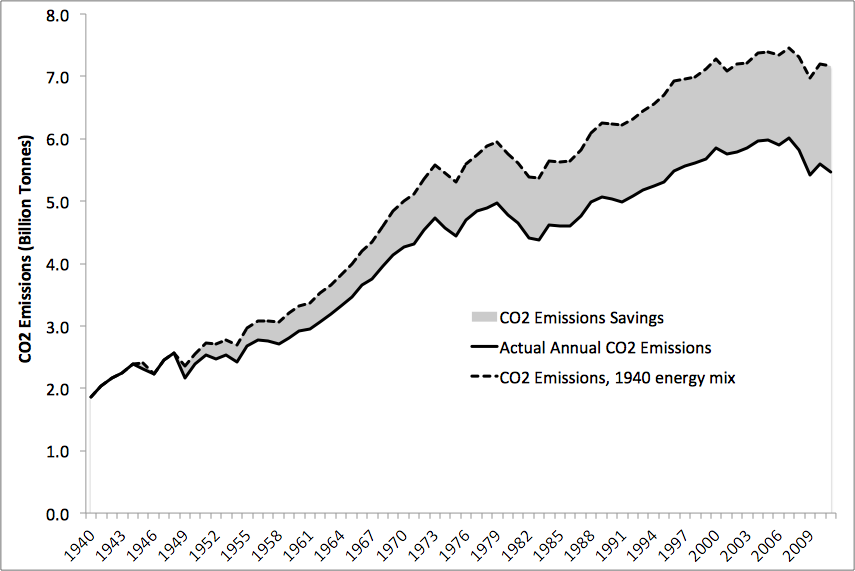 In the 1950s natural gas started to play an increasingly large role in the energy mix, edging out coal in the electric power sector and reducing carbon emissions. In the 1970s nuclear power – which emits no carbon – started to gain share in the nation’s energy supply and in the 1990s renewable geothermal, wind, and solar energy started supplying significant shares of energy. Changes in the shares of petroleum and hydropower in the total energy supply have been relatively small.

What is the relative impact of each of these lower-carbon or zero-carbon fuels in reducing carbon dioxide emissions, relative to the 1940 baseline? To estimate this I assumed that increases in the shares of zero-carbon emission energy sources – nuclear power, geothermal, wind, solar, and hydro – led to proportional decreases in carbon dioxide emissions, relative to the baseline. I discounted the impact that increases in natural gas had on lowering carbon dioxide emissions because although natural gas is less carbon intensive than the 1940 baseline, it still emits carbon. I used a similar method for petroleum and biofuels because although these fuels are slightly less carbon intensive than the 1940 economy-wide baseline, they still emit significant carbon emissions. 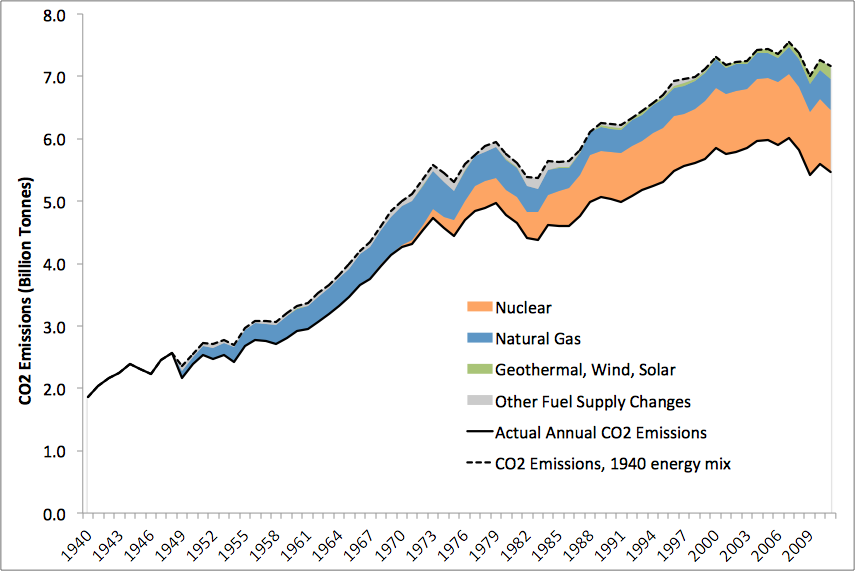 The results show that the switch from dirtier energy to zero-carbon emitting nuclear power accounted for a full half of the total emissions reductions, or 28.1 billion tonnes over the 60-year period. The switch from dirtier sources to natural gas has had a similar impact, 25.9 billion tonnes. Switching to geothermal, wind, and solar has had a much more modest impact, about 1.5 billion tonnes over the entire period. Other cleaner energy fuel-switching over the 60-year period – which includes changes in the shares of petroleum, liquid biofuels, and hydro ­– accounts for a 3.4 billion tonne reduction.

As more countries get access to modern energy services the world is on track to consume double, triple, or quadruple the amount of energy it does today by the end of the century. This should be celebrated, but it means that clean, cheap, and abundant energy sources will need to be made available to limit emissions and avoid the worst consequences of a warming planet. In the context of a “high-energy planet,” which will be consuming vastly more energy than it does today, we should expand rather than limit the suite of low- and zero-carbon options available. History shows that in the US context, two technologies that have been publically demonized in recent years – natural gas and nuclear power – have led the charge in decarbonizing the economy and avoiding carbon dioxide emissions. These fuels should not be demonized but rather seen as essential components of a transition to a low-carbon future.