Over the past couple of weeks there's been more than a little crowing about Australia's one millionth rooftop solar installation amid the long running genuflection at what has been called Germany's solar miracle.

Solar and renewable apostles should keep in mind that if Germany meets its targets and reaches 80 percent of its electricity from renewable sources by 2050, it will have taken about 50 years from the time it began its feed-in tariff in 2000.

Is this really a miracle or is it more like molasses on a frozen alpine morning?

Anybody with a solid understanding of the climate science understands the need for a rapid rollout of cleaner electricity as part of any effective response.

How do the rollout speeds of renewables and nuclear power compare?

Let's compare the speed of per capita electricity generation growth in a few countries for renewables and nuclear. I'm guessing nobody will object if we use the German wunderkind as a top performing renewables example. We'll plot the last 11 years of wind and solar growth, starting 12 months after the beginning of their feed-in-tariff scheme. We'll also throw in the last 11 years of Chinese per capita electricity growth from all sources. This is just to put their coal/wind/nuclear/solar/hydro build in proper per capita context.

All of our comparison cases, except one, are historical. They aren't plans, they are achievements. Anti-nuclear campaigners are fond of finding particular nuclear power stations with time or cost overruns to ‘prove’ how slow or expensive nuclear electricity is to roll out. Cherry picking examples is a time-honored strategy when objective argument fails.

The exception to my ‘runs on the board’ analysis is the United Arab Emirates. In 2009, the UAE notified the International Atomic Energy Agency that it wanted to join various international conventions related to nuclear electricity. The UAE spent a few years with the help of the IAEA fast tracking the establishment of suitable regulatory authorities, calling tenders and educating people. In 2012 Hyundai and Samsung started work on 4 x 1.4 gigawatt nuclear reactors which should be operational in 2017, 2018, 2019, and 2020. The South Koreans build on time and within budget.

For the most part, the chart shows "Added electrical energy" per capita, not total electricity. The Chinese, Belgians and Swedes all had substantial electricity at the first year on the chart, but I've started them all at zero and just considered added per capita energy. But I've made some exceptions. Germany in 2001 did have a little wind and solar already, so I start the line at the appropriate point above zero. Similarly, for France in 1970, with nuclear. France in 1979 is just the continuation with a little overlap, so I haven't restarted them at zero. 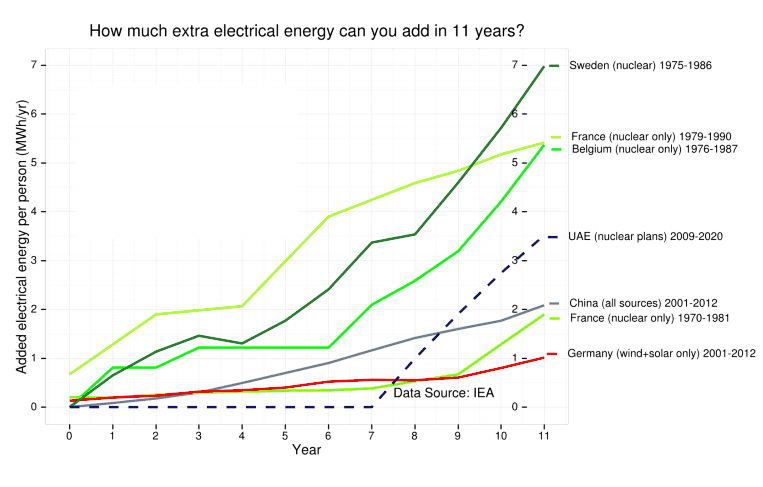 The UAE shows what a country with no nuclear could achieve given the political will. By 2020, about 12 years after notifying the IAEA, the Emirates will be getting 44 terawatt hours of power annually from its South Korean reactors. This is a per capita addition of some 3400 kwh/yr of clean electricity. It's not enough, but as the chart shows, it's nearly three-and-a-half times faster than the German wind and solar rollout.

As you can also see from the chart, if all goes well, the UAE will have added electricity faster with nuclear alone than the Chinese have done using all sources, including coal, during the past 11 years.

In contrast, the Australian rollout of one million solar photovoltaic installations has added just 127 kwh/yr per person (based on these figures) since whenever you decide to date the beginning. If I'd bothered to add it to the chart it would be an almost horizontal line at the bottom.

The UAE rollout speed is no fluke. Nuclear has runs on the board.

The French nuclear growth during the 70s was similar to Germany's current wind and solar growth. By similar I mean only about twice as fast. But then during the 80s, they reaped the harvest of the nuclear projects begun in the 70s and added about 4700 kwh/yr per person between 1979 and 1990.

The Belgians did likewise. And the standout leader is Sweden, adding seven times the per capita electricity between 1976 and 1987 of the current German molasses miracle. Sweden is interesting for another reason. They use almost double the electricity per capita as the OECD average. A whopping 15,000 kwh/person/yr compared to the OECD average of about 8300 kwh/person/yr.

This is way more than we use in Australia (10,000 kwh/person/yr), but they only generate 25 gms of CO2 per kwh, so who gives a damn how much electricity they use? Swedish electricity is about 50:50 nuclear and hydro. Scale back their profligacy and they've got plenty to charge electric vehicles and so on.

With Germany, on the other hand, there is no plausible mechanism for solar or wind to achieve the steep nuclear growth levels seen in the chart. It is more likely that growth will slow as easy wind and solar sites are used and the government runs out of money. Wind power growth is already flattening and while solar is still growing strongly, there is no physical factor which could produce the huge rates of growth seen in the 1980s in France for nuclear electricity.

Germany's renewable hopes over the coming decade are pinned on €550 billion worth of offshore wind farms, slated to give about 10 gigawatts of wind power by 2020. Assuming a 50 percent capacity factor, this is just a per capita bump of 530 kwh/yr over more than a decade. Glacial. And if offshore wind delivers 25 GW by 2030, this is a per capita increase of 1330 kwh/yr over about two decades. Molasses. This is not even close to matching UAE's nuclear rollout and it comes at a massive cost.

But Germany's glacial renewable revolution may not even hit molasses pace with the offshore wind farms being years behind schedule and facing all manner of technical hurdles.

Comparing financial costs is difficult and largely irrelevant in the context of the cost of climate level catastrophes, but however you do it, the UAE is paying a smallish fraction per terawatt hour compared to what Germany is paying for wind and solar. The total UAE cost is about $20 billion for construction and another $20 billion for running costs over about 60 years for 44 TWh/yr.

In comparison, for the 19 TWh/yr of installed solar PV at the end of 2011, Germany is committed to paying feed-in tariffs amounting to about $130 billion. In very rough terms, the UAE will pay half the price for double the energy for three times the lifespan.

I'd attempt some comparison with Australia's renewable rollout, but we haven't actually done anything except fail proudly and boast about it.

Back in 1989, Professor Martin Green of the University of New South Wales predicted solar PV would replace coal in 10 or 15 years. But all we have had is a consistent history of glacial failure. So while Australia continues to produce electricity at 850g of CO2 per kwh, and boast about our dismal one million rooftop solar systems, the French have been producing electricity with nuclear reactors for less than 80g of CO2 per kwh for over 20 years. The Germans are stuck at 450g of CO2 and still building more coal power stations.

Being cool, profitable, and popular is fine, but irrelevant. We need a reliable technology that delivers deep energy emission cuts and we need it fast.

It's rapidly becoming crystal clear that the biggest enemy we face in preventing ongoing climate destabilistation is the anti-nuclear movement. They have cost the planet two decades which could otherwise have seen many more countries with clean electricity, and now they are running a distracting strategy promoting technologies which are intrinsically slow to roll out. They have, in effect, created an energy growth vacuum being filled by coal seam gas which is quick to build but which won't prevent further climate destabilisation.


Geoff Russell is a mathematician and computer programmer, and a member of Animal Liberation SA. He has published a book on diet and science entitled CSIRO Perfidy. This post originally appeared at Business Spectator.