Subsidies for Solar Two Times Higher Than for Nuclear in California

California has spent two times more on subsidies for solar than nuclear, measured on a per-kilowatt basis, according to a new Breakthrough analysis. The finding challenges a new analysis from DBL investors, which compares nuclear to solar subsidies without accounting for the fact that nuclear generates far more electricity than solar. Comparing subsidies on a dollar-per-kWh basis is more appropriate because it gives a sense of relative effectiveness of subsidies at providing services to society, in this case electricity provision. 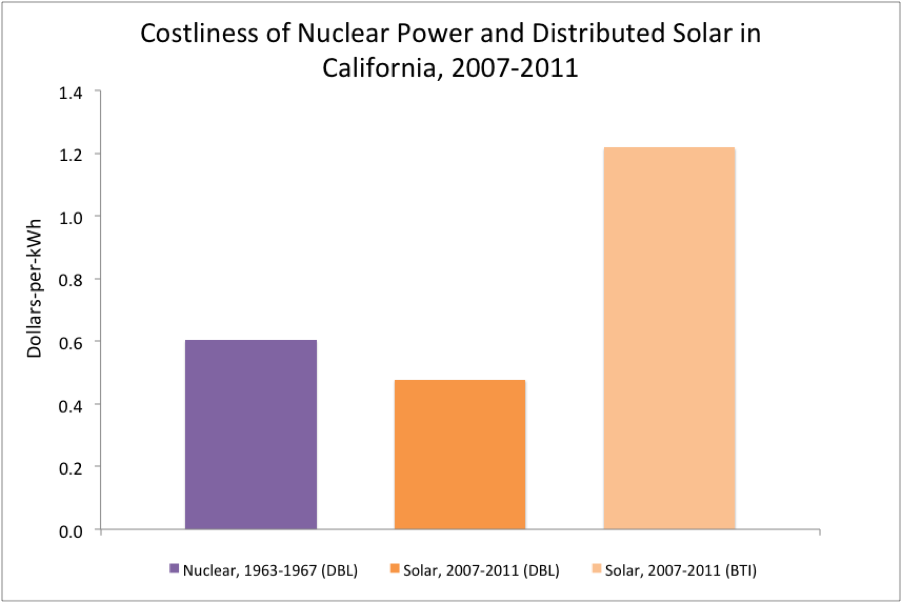 The DBL report finds that for the first five years of commercial nuclear operation in California, 1963-1967, generators received about $1.85 billion in subsidies (2012 dollars), compared to the $1.7 billion (2012 dollars) that distributed solar generation received between 2007 and 2011. Even though nuclear only received $150 million more, the authors strangely conclude that nuclear received four times the subsidy.1 Based on these results the report concludes that policy should be doing more for distributed renewable energy.

For solar, DBL calculates the cost of the federal Investment Tax Credit (ITC) and the Section 1603 cash grant program, but leaves out R&D and expenditures made through California’s Go Solar Program. Over 2007-2011 the Department of Energy spent about $1.1 billion on solar technologies,2 and we estimate that California spent at least $1.5 billion through the Go Solar Program over this period.3 These two additional subsidies would bring the authors’ total subsidy estimate to $4.3 billion over the five-year period, or 1.2 dollars-per-kWh.

There is debate over the appropriateness of “net metering,” where residential solar owners in California receive retail reimbursement rates for electricity supplied back to the grid. Regardless, there are distribution and balancing costs associated with net metering which are borne by non-solar ratepayers, undoubtedly amounting to another layer of subsidization for distributed solar.

The authors acknowledge that solar subsidies are more costly on a per-kWh basis than nuclear:

“Nuclear energy has played a crucial role in delivering power to Californians over the last 50 years and has become a significant base load power source, generating on average 20 percent of California’s electricity over the last two decades. For this reason, the ratio of federal subsidies per megawatt hour (MWh) of generation produced continues to be lower for nuclear than the subsidy level per MWh of solar.”

The function of various “subsidies” is also ignored. While solar subsidies like the 1603 grants, the ITC, and the Go Solar program are designed to lower the purchase price of solar-generated electricity, subsidies for nuclear are primarily related to R&D (which the authors ignore for solar) and liability insurance, which is common for large, capital-intensive technologies (airlines receive “subsidies” similar to the Price Anderson Act, for instance). And as we have documented previously, unique costs to nuclear power like plant decommissioning and liability indemnification amount to a mere $0.001 and $0.0003 per kWh, respectively.

We agree with several of the authors’ conclusions, especially that technology subsidies are crucial and beneficial for emerging forms of alternative energy, and that in the long term subsidies should be phased out. Unfortunately, the comparisons made in the DBL report tell us very little about the ideal form or function of technology subsidies and investments. Their methodology relies on cherry-picked data and arbitrary parameters, perpetuating the illusion that distributed solar represents a complete alternative to centralized power production. Our findings show that nuclear subsidies have provided a relatively cost effective means of providing electricity to Californians and that nuclear power has a vital role to play in providing clean, cheap, reliable electricity.