The new year brought some deserved celebration of the advance of renewable energy in China, as the government announced nearly 8 gigawatts of wind power additions and 3.6 gigawatts of new solar installed during 2013. But as I’ve previously pointed out, it is important to keep this laudable progress in perspective compared to the still staggeringly large annual increase in new China coal power capacity.

Not everyone did so. In a January 4 article entitled “China Roars Ahead with Renewables,” for example, The Ecologist magazine claimed: “Reports of China opening a huge new coal fired power station every week belie the reality – China is the new global powerhouse for renewable energy…It means that the growth of its electric power system – that underpins the entire modernization and industrialization of the country – is now being powered more by renewables than by fossil fuels.” The report concluded, “These results reveal just how strongly China is swinging behind renewables as its primary energy resource…”

Unfortunately, this rosy picture is not justified by the numbers. Once again, in 2013, coal was the big winner. As the graph below shows, when adjusted for capacity factor (the amount of energy each gigawatt of capacity puts out in a year), it’s clear that new fossil energy output in China, most of it coal, exceeded new wind energy by six times and solar by 27 times: 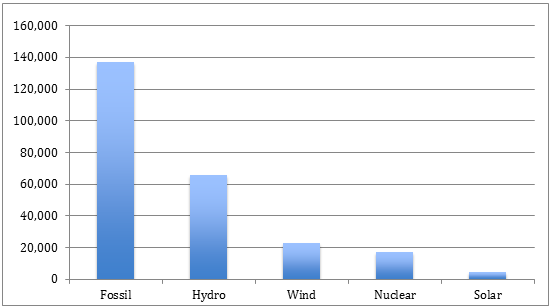 Similarly exaggerated is the article’s claim that this trend “will have a dramatic impact on China’s carbon emissions, slowing their growth and hastening the year when they will actually start falling.” Given the relative youth of China’s coal plants – the vast majority of them have been built since 1990 – they are unlikely to be bulldozed anytime soon. If their carbon is not abated, they will be emitting for another half century, with a carbon overhang of centuries.

In case you’re in any doubt about the longevity of this trend, Reuters carried a story three days later entitled “China Approves Massive New Coal Capacity Despite Pollution Fears” that delivered some sobering facts (emphasis added):

China approved the construction of more than 100 million tonnes of new coal production capacity in 2013 – six times more than a year earlier and equal to 10 percent of U.S. annual usage . . . The scale of the increase, which only includes major mines, reflects Beijing’s aim to put 860 million tonnes of new coal production capacity into operation over the five years to 2015, more than the entire annual output of India.

As we showed in a previous post, even under the most aggressive renewable development scenarios, roughly two thirds of China’s power in 2030 will come from fossil energy, the vast majority of it coal.

Much as one might wish that wind and solar (and for some, nuclear) were sending Chinese coal into the sunset, the facts suggest otherwise. Until we scale up carbon capture and storage, these ongoing China coal trends will continue to be an unmitigated climate disaster.

Armond Cohen is co-founder and Executive Director of the Clean Air Task Force, which he has led since its formation in 1996. In addition to leading CATF, Armond is actively involved in CATF projects focusing on Arctic stabilization, low carbon technology innovation, and zero-carbon fossil energy. This post originally appeared on the CATF blog.