Betting the Planet on Global Democracy

I like to imagine Leigh Phillips as a red-eyed terminator sent from the future, armed with an intellectual scattergun to halt environmentalists hell-bent on taking the world back to some peasant idyll circa 1520. In “Planning the Earth System: A Call for Global Democracy,” Phillips’ time machine (probably nuclear powered) somehow misses 2020 and spins us back billions of years on a romp from Hothouse to Snowball Earth and back again before taking aim at his targets. After all, what serious critique of Westphalian political order ignores the evolution of the ocean’s cyanobacteria and the Great Oxidation Event 2.5 billion years back?

Phillips’ essay (eventually) hits on three of the most important questions of our time: in conservation biology, what is the precise moment in time we are attempting to conserve in the Anthropocene? In economics, can we stop talking about green growth already? (It’s the markets, stupid.) And finally, can we ditch the omnishambles that are our current international governance arrangements and reinvent them for the Anthropocene with bold new ideas, like global democracy?

Phillips’ lengthy trawl through history is largely meant to mock conservationists who argue for some pristine past natural world that we must attempt to restore one day. He points out that change is all this planet knows, so the biosphere should shut up already. The priority now is to find a way to optimize the Earth for human flourishing.

Well, conservationists would agree to some extent. For example, in Half-Earth: Our Planet’s Fight for Life (2016), E.O. Wilson does not advocate a specific date to spin back to. Rather, it depends on the state of a particular ecosystem. The general point seems to be to preserve ecosystems to support a rich, resilient biosphere, which is not a bad idea. Besides, preserving nature for reasons other than economic value or broader societal utility is valid and an essential ethical conversation we must have.

But whichever way you look at it, what we have is a global civilization that was made possible due to an uncannily stable planet. We know enough about the Earth system to know that, without careful management, we are in for a rough ride. We will very likely bequeath future generations a dangerously chaotic, capricious system. Research indicates that this fate is avoidable, and the alternatives could improve the lot of most people.

Phillips’ second point is that progressives need to shift their focus away from economic growth as the enemy. It’s the market (stupid) at fault for the environmental crisis, not growth per se. People arguing for a steady-state economy or even degrowth “neglect the impossibly severe implications of their claims,” he says, pointing to a back-of-the-envelope calculation by former World Bank economist Branko Milanović. Milanović estimated that eliminating inequality, as demanded by some advocates of the “limits to growth” worldview, would leave each person on Earth with an annual income of $5,500. “This would be such a radical constriction of Western workers’ standard of living that the austerity and wage restraint of a Margaret Thatcher or Ronald Reagan would appear benign by comparison.” But Phillips is presumably taking this argument ad absurdum — no one is seriously talking about redistributing all the world’s wealth in this way.

Is the idea of a “steady-state” economy — defined simply as an economy that aims for stable or mildly fluctuating levels in population and consumption of energy and materials — as flawed as Phillips claims? No country has developed without industrializing. And all industrialization has increased resource use. So empirical evidence for a steady-state economy as a successful strategy toward a nation’s development is somewhat lacking. Moreover, as populations continue to rise, there is a risk of committing billions of people to generations of severe austerity. This is a hard sell (though nations have successfully pulled this off before — see the last financial crisis). Solutions to our grand challenges will turn from fiction to fact only if they are politically and economically viable.

Of course, many countries are “overdeveloped.” That is, their resource use and greenhouse gas emissions continue rising, though their quality of life remains largely static while environmental impacts continue apace. Many academics agree that it is possible to have a good life and a healthy economy with a significantly smaller carbon footprint.D.W. O’Neill, “The Proximity of Nations to a Socially Sustainable Steady-State Economy,” Journal of Cleaner Production 108 (2018): 1213–1321.But others say that applying this at the global level still overshoots planetary boundaries.G. Kallis, “Radical Dematerialization and Degrowth,” Philosophical Transactions of the Royal Society A 375 (2017): 20160383.

But green growth is also under fire. A 2019 review of the academic literature by Jason Hickel and Giorgos KallisJ. Hickel and G. Kallis, “Is Green Growth Possible?” New Political Economy (2019), doi.org/10.1080/13563467.2019.1598964.concluded that “empirical evidence does not support the theory of green growth.” They make this conclusion based on two findings. First, after two decades of effort to move onto a green-growth pathway — that is, a permanent, absolute decoupling of resource use from GDP — empirical projections “show no absolute decoupling at a global scale, even under highly optimistic conditions,” though resource intensity may decrease in rich nations.

Second, green growth means permanent, absolute decoupling of GDP from greenhouse gas emissions at a rate consistent with a 1.5°C or 2°C carbon budget. Hickel and Kallis say that absolute decoupling is possible, but not at a pace needed for 1.5°C or 2°C “even under highly optimistic conditions.” Problems include the rebound effect: if we move to a more service-based economy, we still use our wages to buy more physical goods (at least that is what history is showing). And if companies improve efficiencies, prices fall, and more goods are sold. Problem not solved.

Phillips wants to shift the debate away from growth or degrowth and instead focus on making markets work for the stability of the planet. Given that we need to cut emissions by 50 percent this decade to have any chance of stabilizing temperatures at no more than 1.5°C of global warming, this is looking like the only option on the table.

A recent scenario of global consumption and production achieves the Paris Agreement goal of keeping global warming to 1.5°C while global development continues apace. What alchemy is this? Using assumptions about shifts from ownership to usership, digitalization and improved efficiencies, Arnulf Grübler, Charlie Wilson, and colleagues show that global energy demand can actually fall by 40 percent.A. Grubler, C. Wilson, N. Bento, et al., “A Low Energy Demand Scenario for Meeting the 1.5°C Target and Sustainable Development Goals Without Negative Emission Technologies,” Nature Energy 3 (2018): 515–527.This happens as the Global South develops rapidly and while the global economy grows about 2 percent annually. In this so-called “low energy demand” scenario, material output globally decreases by around 20 percent from today. About one-third of this decrease results from dematerialization and two-thirds from material efficiency.

So is this type of pathway politically and economically viable today? The Overton window may be opening up. More countries are now talking about, and legislating for, net-zero emissions by 2050. A Green New Deal is gaining ground in Europe and North America. We now have at least some recognition of the value of very-long-term planning in market economies.

Ultimately, growth driven by education, knowledge, and nonpolluting technologies is possible. But high growth rates in developed economies are probably unrealistic, even without an environmental catastrophe on the horizon. As Thomas Piketty concluded in Capital in the Twenty-First Century, “For countries at the world technological frontier… there is ample reason to believe that the growth rate will not exceed 1–1.5 percent in the long run, no matter what economic policies are adopted.”T. Piketty, Capital in the Twenty-First Century (Cambridge, MA: Belknap Press, 2017): 747.Politically, there appears grudging acceptance that growth in developed countries is unlikely to exceed 2 percent and will never return to the greater than 5 percent growth of the past.

Phillips’ final point is that, given this predicament, we need new international systems for collective decision-making that deliver intergenerational equity. The speed and scale of human impact are accelerating while nation states’ actions to address it are laughably feeble.

The institutions developed after World War II to prevent conflict are not fit for their purpose in the Anthropocene. Nation-state cooperation seems destined to find an equilibrium around the lowest common denominator. International environmental governance has always been like allowing bank robbers to collectively set their own punishments once they’ve robbed the bank. And in 2015, things got worse. Instead of relying on internationally agreed-upon sanctions for rule-breakers (a nonstarter in the negotiations), the Paris Agreement and the Sustainable Development Goals shifted from a rules-based system to a goals-based system. It is perhaps wishful thinking that these agreements will succeed when the only punishment for transgression is a sense of shame and embarrassment among nation-state peers.

Since 2015, the situation has deteriorated further. Years of austerity and decades of growing wealth inequality have fueled a rise in populist, nationalistic leaders who not only question climate science but disregard the scientific process. Bolsonaro, Trump, and their ilk rail against global cooperation (though often oblivious to how weak it actually is), demanding protectionist economic policies and threatening trade wars. They are driving us toward a fortress world — not global unity.

Global democracy offers an entirely different future. Cut-throat competition among nations could potentially be diffused through democracy, allowing an economic system to emerge that supports more effective, long-term planning in support of a stable Earth system. This system would offer ways to build trust, more fairly redistribute wealth, and hold multinational corporations accountable (and have them paying tax). One of the biggest benefits of such a move would be promoting a cultural shift toward acknowledging and valuing a common human identity.

In short, we should bet everything on global democracy.

However, Phillips argues that the transition to effective global democracy cannot be some singular titanic event like the French Revolution; rather, it is more likely to unfold like women’s rights: something that evolves over decades and centuries. While this may be true, unfortunately, time is a luxury we do not have.

Is any of this economically and politically viable? In October 2019, the former Governor of the Bank of England, Mervyn King, addressed the IMF’s Annual Meeting. He decried that 10 years after the financial crisis of 2008, in stark contrast to previous global financial crises, no new thinking had emerged. To King at least, it seems that green growth, almost-steady-state economies, and global democracy remain on the margins of discussions. They now need to be pushed center stage because if we have to wait decades to act, the only technology that will prevent serious disruption will be a time machine taking us back to today.

Owen Gaffney is a global sustainability analyst and writer at the Stockholm Resilience Centre and Potsdam Institute for Climate Impact Research. 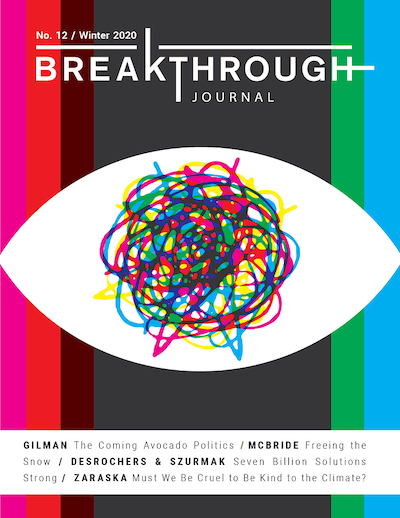