For Green Moonshots and Manhattan Projects to Work, Washington Will Have to Design the Mission

Yet, climate and industry are natural partners. Meeting the climate challenge will require a significant transformation in the ways we produce and consume energy—one that must overcome the huge inertia in the system. And that’s exactly the type of challenge that industrial policy is well suited to address. After all, you can’t have a “climate Moonshot” or “climate Manhattan project” without a Washington, DC, poised to define the mission (get to net-zero) and then provide direct and sustained support to get the technology off the ground.

Yet, key government efforts to do just that, like the Biden administration’s Build Back Better, have stumbled, illustrating how difficult enacting an industrial policy can be. There have been successes, too, though, and a look at those provides some tips for using industrial policy as a climate tool.

The sheer scope of the changes required to reduce carbon emissions from today’s energy systems to net zero by mid-century is significant, touching all parts of our lives. The ways that we heat and cool our homes, move around our cities, generate electricity, and manufacture goods—all will have to be transformed.

But the challenge of such a transition is made even greater by the path dependency of technology, infrastructure, and institutions, which all act to “lock” industrial economies into existing patterns. “Carbon lock-in,” as observers like George Mason’s Gregory Unruh and Yale’s Karen Seto have dubbed it, is enforced by many factors, ranging from the long lifetime of technologies themselves and the infrastructure needed to operate them, to the stability that institutions naturally create and the ingrained habits of individuals who interact with them. These are all barriers to change.

Addressing the climate challenge thus requires overcoming carbon lock-in, and the government is critical in doing so. Indeed, circumventing lock-in is, in many ways, the very purpose of industrial policy.

Industrial policy, or mission-oriented innovation policy as it is also called, involves a high level of state involvement in defining and supporting radical technological innovations that address a specific problem. The mission to the moon and the Manhattan project are two of the most famous examples, but industrial policy is behind the development of many new drugs and the invention of many of the components of our smartphones.

Industrial policy stands in contrast to what is called diffusion-oriented innovation, in which the state has a more passive role, simply facilitating incremental innovation that arises from other sources, specifically the private sector. It is characterized by decentralized decision-making and the lack of a specific technological focus. It largely impacts technologies that are already in the market or are close to being so.

For the last few decades, after industrial policy fell out of favor in the late 1970s and early 1980s with the rise of market fundamentalism, diffusion-oriented innovation has seemingly reigned supreme. However, even as it was publicly rejected by many, there is evidence that the state’s role in innovation has, in fact continued, and even grown in recent decades. In the 2008 article, “Swimming Against the Current,” for example, sociologist Fred Block points to a range of examples, including programs such as the government’s Small Business Innovation Research initiative and specific projects like the Human Genome Project.

Today, the role of industrial policy may become even greater. Facing carbon lock-in, it can be the outside force that creates an ambitious goal—more specific than simply an economy-wide emissions reduction, but more general than directing support to a single specific technology advancement—and then musters support behind it.

There are, of course, risks in the application of industrial policy, with critics highlighting the potential for governments to make expensive mistakes through lack of information and the potential for rent-seeking. Institutional frameworks can be designed to improve the implementation of policy and mitigate those problems, as economist Dani Rodrik has shown. But even then, the challenge of defining the direction of industrial policy still remains. By definition, disruptive innovation changes a market. The impact of that change on an incumbent industry can vary significantly—from beneficial to harmful—with significant implications for a government’s ability to design and implement policy.

In the middle of the spectrum, there are a couple of different types of scenarios. For example, consider innovation in the pharmaceuticals sector. The development of a new drug for a previously untreatable condition has been shown to expand the market. This contrasts with new drugs that are similar to existing therapies, where a large majority of sales may simply be at the expense of existing options. Innovation that creates a true advance poses no threat to incumbents but rather presents an opportunity for those already in the market to increase their overall sales.

Further, even when innovation results in some competition for incumbents, it can also provide them with benefits as well. The dramatic yield increases in wheat and rice arising from the use of new technology in agriculture are one example. The significant benefits from innovation here flow to consumers, but the existing producers and input providers are able to maintain their market share and some portion of the benefits from the innovation.

Also in this middle zone are cases in which the incumbents are located in a different market from the upstarts. For example, in 1986, the United States decided to back the revitalization of its domestic semiconductor industry through the government industry consortium SEMATECH. Together, the United States and its domestic industry challenged the Japanese incumbency in semiconductor manufacturing by targeting a reduction in manufacturing costs and improvements in quality, which ultimately benefited both the U.S. tech industry and the broader economy.

On the other end of the spectrum are the innovative processes that cause harm to incumbents. Here, a new development competes directly with existing products and services but the incumbents are not able to jump into the new market. The absence of historical examples of industrial policy within this category is telling. What incumbent industry would be content to embrace a plan for its own demise? As researcher Hanna Breetz and others have observed, pushback against new climate-friendly technologies intensifies as they are deployed and therefore, begin to pose a direct threat to the incumbents.

A green industrial policy would have to acknowledge this challenge. First, it is worth looking at the types of green innovation that existing players do support, such as carbon capture, utilization, and storage (CCUS) and blue hydrogen produced from natural gas. Both technologies sit towards the more beneficial end of the spectrum. CCUS has created a new market (for capture and storage technology) that sits on top of the existing fossil fuel market. Blue hydrogen could boost existing demand for natural gas (or, more accurately, fill in for a potential reduction in demand).

Both technologies do have a role to play in a future net-zero energy system, but there are other solutions, such as the electrification of various sectors (including heating, transportation, and manufacturing), which may have a larger role and are not as attractive to existing players because electricity is a direct substitute for the fuels they produce today. Getting the balance right could be the key to whether industrial policy—and with it, efforts to mitigate climate change—succeed or fail.

The opposition to policies that threaten incumbent industries poses two different risks: the first is that potential solutions will be constrained to those the incumbents deem (or are expected to deem) acceptable. The second is that a green industrial policy of any kind will simply fail to be implemented in regions with large fossil fuel interests.

Restricting innovations to those that do not threaten an established market will undermine the even playing field upon which potential solutions must be evaluated. Detailed modeling of net-zero pathways shows a wide variation in the size of the role of technologies such as CCUS and blue hydrogen. Excluding entire categories of solutions, namely those that reduce fossil fuel use, may result in an overinvestment in technologies that are ultimately unable to compete with alternatives for decarbonization.

Moreover, although the failure to implement policy in some regions may be partially overcome through innovation in others, the long-term impact on the regions themselves could be harmful. After all, the regions most dependent on fossil fuels will be most in need of restructuring; they will be hardest hit by the decline in demand for the products they produce today. “Industrial restructuring rarely takes place without significant government assistance,” wrote Rodrik in 2004, and the failure threatens to prevent any necessary industrial restructuring.

History suggests there may be ways to avoid both problems, but this requires a better understanding of the nature of the potential opposition to green industrial policy. In each case, the goal will be to shift potential policy goals from being directly threatening to incumbents to being more neutral or potentially beneficial.

One strategy involves leveraging the differences in national, regional, and subregional jurisdictions where incumbent industries operate. Although there is more overlap between domestic regions than between SEMATECH and Japan, for example, the direct influence of any given industry is somewhat limited to the region in which it operates. And national-level support for green industrial policy can target regions with strong local fossil fuel incumbents to ensure that they will benefit from the proposed changes.

A second approach is to leverage adjacent competencies, which may allow incumbent firms to play a larger role and ultimately benefit from innovations that are not directly relevant to their existing market. For example, there is potential for fossil fuel-producing firms to play a role in meeting the increased demand for the minerals that are essential components of clean energy technologies. Although complete transformations, including a shift away from an existing market, are rare, there are examples of success. For example, the Danish national oil and gas company transformed into the offshore wind company Ørsted. In that case, the company was able to leverage its expertise in offshore oil and gas development to become a leader in offshore wind development, taking advantage of the overlap in the skills required.

Finally, policy makers can identify areas where the current trajectory is likely to create a decrease in market size in the absence of policy intervention. There are different potential sources for such a decline: advances in competing technologies, physical or resource constraints, or social pressure and changing preferences, to name a few. In all cases, there must be a common understanding of the threat in the absence of action, and the mission must be geared explicitly toward addressing it.

These approaches, individually or in combination, can be used to shift the nature of the impact of the mission on a powerful incumbent industry. Doing so is likely to be critical for building support for a green industrial policy that is truly technology and pathway neutral in regions that most need the support of government intervention.

Sara Hastings-Simon is an Assistant Professor in the Department of Physics and Astronomy and the School of Public Policy at the University of Calgary.

The Guns of Warming 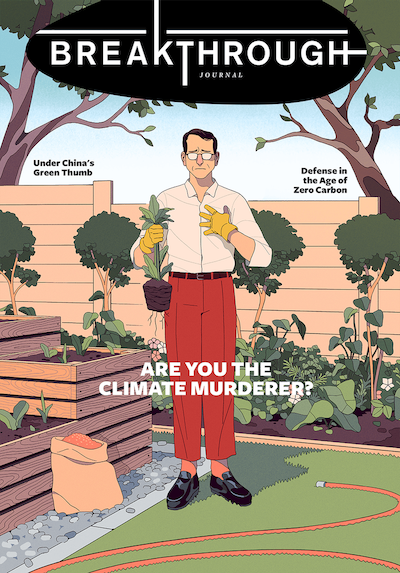