Technology is an instrument of foreign policy. Energy technology is that plus a tool in the fight against climate change. Nuclear energy technology is all that and even more. It conjures energy independence from shaky global markets, physical security against great power rivals, an economic opportunity to corner new technology markets around the world—indeed, a path to a promising future.

All that ought to make the next generation of nuclear reactors very important to the United States, as it focuses its considerable powers of innovation and high-tech manufacturing on the challenges of carbon-free, dependable, and independent electricity generation while also facing down a resurgent Russia and a powerful China. And if policymakers have any doubts about nuclear’s centrality to almost all of their goals, it is worth a glance backward, at the Soviet Union.

What the Soviets Got Right About Nuclear

In their day, the Soviets weren’t very good at some of the basics, like supplying food, clothing, and shelter. But they outperformed in other domains, including in the electrification of their vast territory. Earlier than many other nations, they recognized electricity as an essential precursor to health and prosperity. Communism, as Vladimir Lenin once famously defined it, was “Soviet power plus the electrification of the whole country.”

Part of the electrification was novel ways of producing power, namely through nuclear. Russia today gets about 20% of its electricity from nuclear reactors, a proportion that has been gradually rising. Adding reactors to the Russian grid helps the country meet rising energy demand, while also reducing domestic use of fossil gas, which can be sold to Europe. It also reduces the amount of coal that must be dug and shipped on the railways, which have limited capacity. In addition, some Russian reactors produce steam that is used for heating homes, factories, and businesses, thus reducing the use of fossil fuels even further.

All that would be evidence enough that Russia’s decision to focus on electrification through nuclear was a wise one. But Soviet Moscow’s nuclear ambitions never stopped in Russia proper. Instead, Soviet leaders strove to spread nuclear technology to all the Soviet republics, under the slogan, “Physics to the Provinces!” And then the Russians pushed further still, to the satellite countries of Eastern Europe, and to China. That campaign has never really stopped.

Over the years, Russia has sold its water-based Vodo-Vodyanoi Energetichesky Reactor (VVER) models, its modern class of reactor, to Armenia, Bangladesh, Belarus, Bulgaria, China, the Czech Republic, Egypt, Finland, East Germany, Hungary, India, Iran, Slovakia, Turkey, and Ukraine. (Some are still in the planning or construction phase, some have been shut down, some have been modified to meet Western safety standards, and at least one in Ukraine is now occupied.) Moscow is also discussing building a reactor with two former Soviet republics, Kazakhstan, which is a major uranium exporter, and Uzbekistan. That is in addition to Russia’s graphite-based reactors, the most famous of which was at Chernobyl but which also include installations in Lithuania that are now shut down.

Russia’s Lessons for the United States

As the world enters an era of rapid growth in electricity consumption, severe concern about human-caused climate change, and increasing rivalry between the West and Russia and China, it may be time for a closer look at how the Soviet Union pulled off its nuclear feat and what the consequences were. In 1999, Paul R. Josephson, a professor of Soviet and Russian history, published Red Atom, a thorough work on the subject. Although the book is now more than 20 years old, it is looking timelier than ever.

For the Soviets, electrification was the key to growth and, in turn, great power. Nuclear technology was the medium, explains Josephson, because it gave the regime prestige and legitimacy. Along with other achievements like Sputnik, the first artificial satellite, it also advertised the scientific superiority of the Communist system. And, as a side benefit, nuclear technology would be a way to engage the technological elites of societies that the Soviets wanted to pull into their orbit, some already within the USSR, some adjacent.

The Soviets pursued some technological dead-ends, notes Josephson, but they did build the first reactor connected to an electricity grid, Obninsk, and they took the first steps toward fusion. (That’s why the heart of experimental fusion reactors today is still named with a Russian term, tokomak.) They also built nuclear icebreakers, which still operate. Other efforts were unsuccessful. Still, finding dead-ends is an inevitable cost of pioneering new technologies.

More than dead-ends, however, the Soviet Union and then Russia found experts, collaborators, and markets, all of which formed the basis of enduring relationships with many developing countries. Plans for new reactors wax and wane, but even in the last few years Russia has established nuclear cooperation agreements with Argentina, Bangladesh, Brazil, Cambodia, Myanmar, and Zambia, who join the other countries already in Russia’s nuclear orbit.

And, of course, old trade and infrastructure ties persist. As of 2021, according to a May 2022 report from Columbia University, about 46% of the world’s total uranium enrichment capacity was in Russia. In fact, although the Soviet Union broke up more than 30 years ago, it is only now that Ukraine, the Czech Republic, and Slovakia are starting to really break free from the Russian nuclear supply chain by obtaining uranium fuel assemblies from the West. Even 16% of the United States’ uranium, according to the U.S. Energy Information Administration, has come from Russia, with another 30% from Russian-allied Kazakhstan and Uzbekistan.

There is a lesson here for the United States: if the future is still nuclear, it is best to dominate advanced nuclear technology, expertise, and markets as early as possible. U.S. policymakers should not wait for the top engineering talent of the countries in Africa, Asia, and Latin America that are now industrializing to look to Beijing or Moscow for technology, assistance, or parts—much to less have to look to Beijing or Moscow for those things themselves.

Nuclear for the Planet

Beyond the geopolitical reasons to pursue next-generation nuclear are the environmental ones. In wealthier countries, it is clear that domestic transitions to clean energy will require a very large build-out of nuclear energy, as the Breakthrough Institute’s recent “Advancing Nuclear Energy” report made clear.

In much of the rest of the world, the problems are even more basic. Even today, hundreds of millions of people around the world lack access to reliable electricity, and burn dung or wood harvested from eroding hillsides for fuel. Women cook food over indoor fires and inhale the smoke. Billions more get electricity by burning coal, which is still the world’s largest energy source and still growing robustly.

If the world wants to phase out coal, provide enough electricity so that everyone can enjoy its benefits—like clean water, refrigerated food, light after sunset, and cooling during the heat of the ever-warmer days—and do so sustainably, we are going to have to invent cleaner ways of making electricity, prototype those ways, perfect them, and then make them available worldwide. Nuclear will have to be a big portion of those plans, too.

The reactors currently moving toward commercial deployment in the United States and elsewhere are better suited to the electric grids of emerging economies than the behemoths now in operation. The new ones are smaller, which is essential if they are going to be deployed on grids that are less extensive or weak. (Otherwise, a reactor trip leads to a regional blackout.) In fact, today’s reactors are contained enough that they can be factory-built and then delivered by rail or barge, in a limited number of pieces. That makes construction easier in countries with difficult geographies or infrastructure that is less reliable.

The main nuclear enterprise owned by the Russian government, now called Rosatom, expects to turn a profit by supplying fuel and nuclear services, as well as by building and owning the reactors and selling the electricity. But it also buys Russia influence.

Making American advanced reactors ready for export is going to take policy support. But because of the overlap between military and civilian technologies, there are good reasons here, too, for the United States to seek to dominate the export trade, so that it can send its nonproliferation tools along as part of the package. (This was ostensibly a Russian goal, as well, with reactors built under the slogan “Let the atom be a worker, not a soldier.” But presumably American export controls would be a bit more robust.)

How the United States Can Regain Its Edge

None of this means much, though, if the United States doesn’t act soon. Around the world, pressurized water reactors derived from American designs still predominate, but the United States is no longer the leading exporter of reactors.

Nuclear industry lobbying materials once called for “maintaining” American leadership in nuclear exports, but now they speak of “regaining” it.

China, the preeminent nuclear builder (including on the construction of four Westinghouse-designed large advanced reactors in China), and South Korea, a close runner-up, which is now completing construction of a four-reactor complex in the United Arab Emirates, hold a clear edge in construction expertise for current-generation technology. (Tellingly, when the U.A.E. began work on its giant nuclear project, although it picked the South Korean designs, it also hired American experts in reactor operations.)

Russia, likewise, operates two “fast spectrum” reactors, models with more safety advantages, and that can use a wider variety of fuels, including some materials now considered waste. It recently deployed a floating reactor. By invading Ukraine, Russia may have set itself back, alienating many export markets, although Egypt, at least, is moving ahead with a Russian-built, Russian-financed nuclear project.

Still, there is no reason besides lack of consistent government policy and clumsy regulation why the United States can’t catch up. This country invented the Internet and the personal computer, sent space probes to planets across the solar system, and developed and deployed effective COVID vaccines in a matter of months. It is brimming with venture capitalists and engineers who are stalking the next big thing. It has the proper combination of entrepreneurial ambition, technical expertise, and freedom to innovate.

The country just needs a little imagination and a clear understanding of the task ahead. Job two will be using zero-carbon reactors to cleanly meet galloping demand for electricity around the world and displace coal as the default option. Job one is demonstrating to the world that we know how to do this at home.

Matthew L. Wald is an independent energy analyst and writer. He was a reporter for thirty-eight years at The New York Times where he covered climate, energy, and other subjects. He was also a policy analyst and communications consultant for six years at the Nuclear Energy Institute. 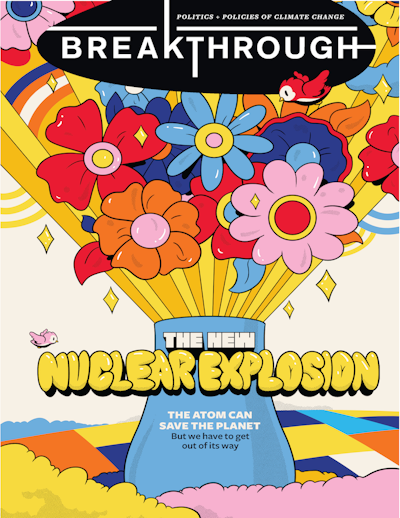