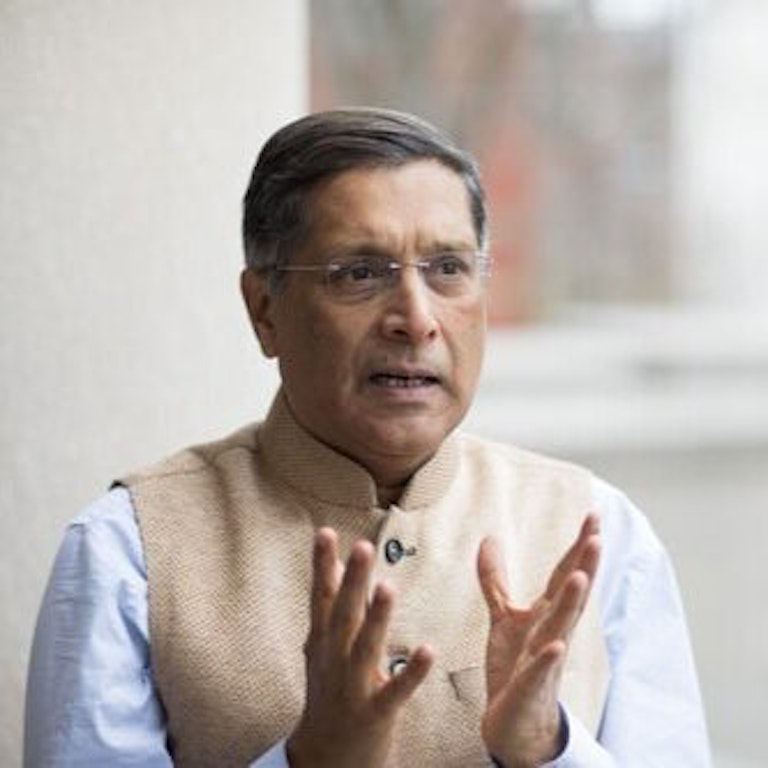 Arvind Subramanian is a visiting lecturer at Harvard’s Kennedy School of Government and a non-resident senior fellow at the Peterson Institute for International Economics. He is the former Chief Economic Adviser to the Government of India. Professor Subramanian researches and writes on the Indian economy, as well as on economic development and the international systems of trade, aid, and finance.

As Chief Economic Adviser, Professor Subramanian initiated and implemented a series of major policies, including increases in public investment, a simplified goods and services tax (GST), attempts to tackle the Twin Balance Sheet challenge, conceptualizing the financial and digital platform for connectivity (the so-called JAM trinity), and Universal Basic Income. He also oversaw the annual Economic Survey of India, which under his stewardship became a trusted, widely-read resource that elevated the public discourse on the Indian economy and economic policy. The 2018 survey received 20 million views from over 190 countries in its first year of publication. To give all Indians greater access to information about their government and economy, Professor Subramanian created a free online course on the Indian economy for the government’s Swayam platform that is now widely accessed.

Professor Subramanian is a dedicated teacher who has mentored dozens of students. In addition to his current role, he taught a course on trade at Harvard University’s Kennedy School of Government (1999-2000) and the School for Advanced International Studies (SAIS) at Johns Hopkins University (2008-2010 and 2014).

Professor Subramanian is the author of several books. In 2018, Penguin Random House published the best-selling Of Counsel: The Challenges of the Modi-Jaitley Economy reflecting on his time in India. His previous book, the award-winning Eclipse: Living in the Shadow of China's Economic Dominance, was published in September 2011 and has been translated into three languages.