A Response to Breakthrough's Essay on Meat Production

In “The Future of Meat” Marian Swain draws attention to multiple factors that combine to determine the impacts of meat consumption on natural resources. Swain identifies area of cropland for animal feed as a key impact. Using the “ImPACT Identity” we can dissect causes of changes in the number of acres of cropland employed to satisfy the American appetite for meat.1 Our formalism requires some simplifications and assumptions about the path from field to plate, but the result robustly indicates the power of five trends.

To answer “How much cropland is needed to raise meat for the US population?” the ImPACT identity posits that the cropland used to provide meat equals the product of:

Annual changes in any variable in this sequence (assuming the others stay fixed) alter the number of acres of cropland used to satisfy American meat consumption. In casual terms, changes in the number of mouths, affluence, taste for meats, efficient growth of animals, and crop yields all influence the land area impacted or spared.

Spanning a long interval with reliable data over which American habits evolved, we calculated how each variable in the ImPACT identity changed in the United States over the period from 1969 to 2010. Population and GDP per capita grew at annual rates averaging about positive 1% and 1.7% respectively over this period. In contrast, the same interval saw negative annual changes in the amount of meat Americans ate per dollar, the amount of grain needed to produce a unit of meat, and the amount of land needed to grow that grain. On average, between 1969 and 2010, the amount of US cropland used to grow meat fell almost 0.8% per year.

In essence, even as wealth and overall meat consumption rose, shifting taste and more efficient growers lowered the absolute impact—in this case, land area required for crops—of producing meat. The graph below shows this decoupling of meat and land. 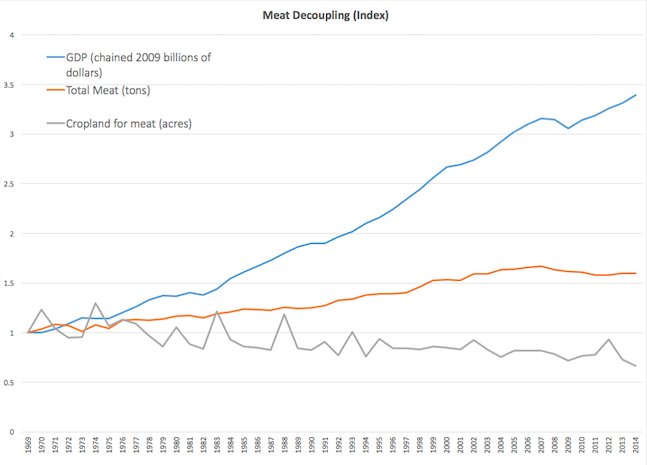 Our analysis covers three types of meat—beef, swine, and poultry—which account for over 95% of American consumption of meat from land animals. Combined, such American meat consumption grew from 15.3 million tons in 1969 to 23.7 million in 2014.2 The composition of that total shifted strikingly. While the average 1969 American ate three times as much beef as chicken, a recent average American ate about 10% more chicken than beef. Pork consumption fell from being twice that of chicken to less than three-quarters of it.

We assumed that all US consumption of the three meats comes from animals raised in feedlots. In reality, the USDA reports that “beef from alternative production systems … accounts for about 3 percent of the U.S. beef market.”3 While animals feeding on grass and other extensive sources of nutrition might assume greater importance in the future, the tiny fraction in our interval means adjusting for it does not change the picture. We also assumed corn, which typically forms 80% or more of the diet of cattle and swine, as the feed for each animal type and a feed conversion ratio of 6:1 for beef, 3:1 for swine, and 2:1 for poultry.4 Our values for corn yields (bushels per acre) come from the USDA.5 Rises in yields of soybeans, whose products are fed to chickens and pigs, resemble those of corn, so adding detail on different feeds does not change the picture either.

In sum, our calculation shows that the amount of cropland used for raising land meat for Americans fell by nearly a third: around 9 million acres, about the size of Maryland. This occurred over four decades famous for burgers, sausages, and fried chicken. The rise in the yield of feed per acre, along with the shift in the American diet away from beef and pork to chicken, contributed the most to the reduction of cropland used for meat. Because our data begin in 1969 when American meat consumption was already high, rising affluence resulted in little more American appetite for meat per capita. The land sparing was surely compounded by improvements in animal breeding and nutrition—for example, by the addition of trace elements such as zinc to animal diets.

Collectively, the lowering of meat/GDP, feed/meat, and land/feed allowed 319 million Americans in 2014 to eat nearly 24 million tons of meat from less land than the 202 million Americans in 1969 ate their 15 million tons of meat. The recent American meat experience shows that sizeable reductions can occur even without a shift to a mainly vegetarian diet and suggests caution in predicting rising use of land for meat around the world.