The report comes at a time when there is a concerted effort to understand the extent of rebound and how much we can depend upon energy efficiency as a way to reduce energy consumption and thus greenhouse gas emissions. In April, the Intergovernmental Panel on Climate Change announced for the first time that rebound effects “cannot be ignored,” and that attention to them is essential for “providing a clearer understanding of [efficiency’s] contribution to climate policies.”

The three historical case studies are particularly instructive because they are three sectors in which demand for energy is expected to grow significantly, particularly in emerging economies. Moreover, these sectors have been the focus of much attention from governments and institutions seeking to reduce energy consumption and greenhouse gas emissions through efficiency improvements.

For more than a decade, detailed reports from leading energy analysts and consulting groups, from the International Energy Agency to McKinsey to the Rocky Mountain Institute, have argued that energy efficiency improvements might bring deep emissions cuts along with greater economic growth – a “win-win” for policy makers and businesses.

Over the same period, a growing expert consensus challenged the view that energy efficiency measures would be able to significantly reduce emissions. Breakthrough Institute’s report Energy Emergence: Rebound and Backfire as Emergent Phenomena reviewed nearly 100 peer-reviewed articles on rebound and backfire, and discovered that across industrial sectors, such as electric utilities, construction, agriculture, manufacturing, and communications, rebound was found to be higher than at the consumer level.

Prior to Breakthrough’s report much of this literature on rebound remained unknown to policy makers and other energy research organizations in the United States. Up until recently, the IEA assumed in its World Energy Outlook that rebound effects erode only 9 percent of energy savings – a very modest number compared to what the academic literature says.

The tide is moving on rebound, however. The IPCC made clear: climate mitigation strategies that heavily rely on energy efficiency measures must be re-evaluated. After years of simplistic accounting, which was roundly criticized by Breakthrough and independent scholars, the IEA has finally caught up to the academic literature. Their latest report, Capturing the Multiple Benefits of Energy Efficiency, acknowledges that direct rebound in wealthy countries ranges from zero to 65 percent and agrees with a major modeling effort finding globally averaged rebounds from energy efficiency could reach as high as 52 percent by 2030.

A Breakthrough analysis found that rebound effects as high as 60 percent (the IEA’s high-end scenario) will have significant implications for global climate mitigation efforts, requiring as much as 13 percent more clean energy supply by 2035 to meet higher global energy demand – equivalent to the total energy consumption of 19 Australias. At the low end of the IEA’s projections, with rebound at 20 percent, we would need the equivalent of 4 Australias worth of clean energy to meet the IEA’s 450ppm energy demand projections.

“The implications [of rebound] for future global energy demand is significant,” conclude the authors of Lighting, Electricity, and Steel. “Rather than saving energy, in many cases we can expect the adoption of energy efficiency-improving technologies to contribute to processes that lead to an overall increase in energy consumption.” The three historical case studies in this report only scratch the surface of our understanding of rebound, which is highly variable across sectors and economic contexts.

Introduction to the report

For the first time in its 25-year history, in April 2014 the Intergovernmental Panel on Climate Change (IPCC) affirmed that energy efficiency measures can lead to increases in demand for energy, thereby diminishing the reductions to carbon emissions precipitated by energy efficiency measures. The so-called rebound effect “cannot be ignored,” wrote the authors of the Mitigation of Climate Change report, which reviewed the best available peer-reviewed literature on the topic.

While it has long been known that cost-effective energy efficiency measures are beneficial to economic welfare and therefore worth pursuing on grounds other than climate change mitigation, the magnitude of rebound effects and their implications for the utility of energy efficiency as a climate change mitigation strategy remain contested. The IPCC’s recognition of the importance of the rebound effect confirms previous work by Sorrell, Jenkins et al., Chakravarty et al., Saunders, and others who have argued that rebound effects are real and can be significant in a variety of contexts. However, the extent to which rebound effects from specific sectors and economic contexts can be generalized across other sectors and economies remains debated. Much of the research to date has been theoretical or specific to a given sector, and it remains unclear how important rebound effects are on an economy-wide scale.

Over the past several years researchers have attempted to fill the gaps in this literature. Some have focused on reviewing previous literature on the topic, while other have modeled rebound effects or reviewed historical evidence of the rebound effect in action. While this research has improved our understanding of the potential magnitude and implications of the rebound effect, is has not fully elaborated the mechanics of how and why rebound actually occurs.

This report attempts to provide insight into these questions by offering three case studies on historical instances of rebound: electricity production in twentieth-century America, lighting from 1700 to the present, and historical iron and steel production. These cases are of particular relevance to energy and climate change policy because each of these sectors is expected to be a major driver of future energy demand and therefore greenhouse gas emissions. Electricity generation comprises 16 percent of the world’s total energy consumption, a share that is expected to grow. Lighting is one of the largest end-users of electricity globally, comprising 19 percent of total global electricity use. And the iron and steel sector is one of the largest industrial consumers of energy.

Several common characteristics link the three case studies. In each case, demand for new energy services and energy intensive goods was far from saturated, and occurred in the context of rapid industrialization and growth. Additionally, in each case the introduction of more energy efficient technologies contributed to significant cost declines, enabling the widespread use of energy services that enhanced human welfare. In all three cases, more energy efficient technologies produced rebound effects and ultimately contributed to a net increase in energy demand, or “backfire.” 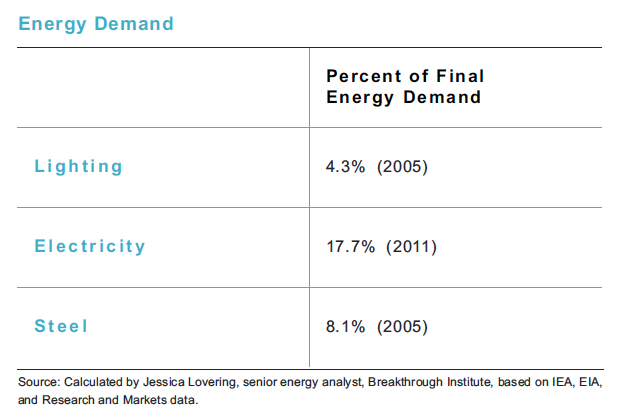 The implications of these case studies are not that energy efficiency improvements will lead to backfire in every context, nor that other trends, such as rising incomes and population growth, were less important than efficiency improvements in the growth in energy consumption. Nor do they suggest that the overall effects of energy efficiency measures in these industries were undesirable. On the contrary, the economic implications of rebound and backfire are far from negative, both in these specific cases and in general. Energy efficiency gains reduce the cost of important energy services such as lighting, heating, and transportation, thus enabling their consumption in greater quantities and, by extension, contributing to economic and social welfare.

These studies do suggest, however, that in industrial and commercial sectors, and particularly in industrializing economies in which there is large unmet demand for energy services and ample room for growth, there is a high likelihood of rebound effects and a distinct possibility for backfire. As the IPCC notes, there is “evidence to support the claim that rebound effects can be higher in developing countries.” For example, the report highlights, “rebound effects in the residential sector in India and other developing countries can be expected to be larger than in developed economies because high-quality energy use is still small in households in India and demand is very elastic.” The likelihood that rebound will be even higher in the developing world than in the developed world, where the IPCC finds a rebound effect of 20–45% in end-use technologies, underscores the need for further research into the mechanics of the rebound effect and its likely economy-wide impact. In the IPCC’s words, more research will be essential to establish “a clearer understanding of [efficiency’s] contribution to climate policy.”

It is in this spirit that the following case studies are offered. By highlighting the mechanisms through which the rebound effect has occurred across three important, energy- and emissions-intensive industries, these case studies illustrate the importance of rebound effects and highlight several factors suggesting that they will be experienced in significant measure in the future, in particular in emerging developing world economies. Policy makers would be well served to think carefully about how heavily we should depend on efficiency-related emissions reductions in these and similar sectors of the global economy, the report concludes.