The Romance of Ecomodernism

People will be drawn to an ecomodernism when it combines a romantic love for nature with the pragmatic use of technology and development. That was the advice offered by Emma Marris, Mark Sagoff, and Reihan Salam in the final panel of Breakthrough Dialogue 2014.

“Environmentalism has many characteristics of a religion — a religion I’m a member of,” said Marris. “But if we care about outcomes, pursuing personal eco-sainthood is not the most efficient means of getting to those outcomes,” Marris said. “Can we have a movement with excitement and enthusiasm but without the religiosity?”

She offered the metaphor of tracking wolf populations with radio collars:

Even people totally into wildness are okay with putting radio collars on wolves in the wild so that we can track their populations. When we look at picture of wolf with radio collar, we kind of cringe. The collared wolves are putting up with it so they can ensure the future of their species…Can nuclear be the wolf radio collar of energy? Something we put up with to get things back on track. Is it possible to be outcome-oriented and not ditch the romance?

“Having it Both Ways”

“There are two views of man and nature in Genesis,” explained Sagoff. “In the first passage, God saw it good to protect divine creation, and so too must man. In the second, God curses man for having eaten from tree of knowledge. God condemns man to eating from the land through paintful toil ‘until you return to the ground.’”

“But in cursing humanity God also gives humanity a mission. We can redeem Nature while civilizing the wildness in ourselves. Nature in this way becomes a counterweight to the idea that we should preserve nature because that’s what God has made.” 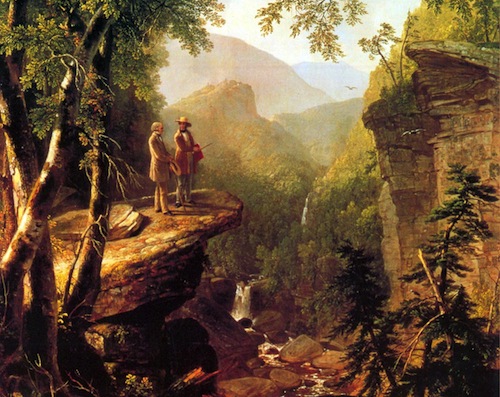 "Kindred Spirits" by Asher B. Durand 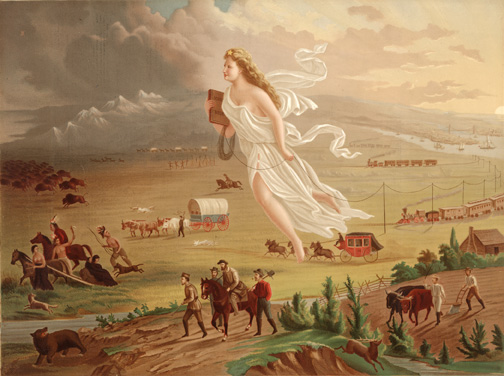 This painting of Columbia as progress shows her as a domesticating, civilizing force in opposition to power of untamed nature. She is a benign angelic figure responsible for uplifting and making a smooth transition of nature to civilization. This is the religious credo of developmental approach…In ‘Kindred Spirits,’ preservationists argued in contrast that one does not improve nature but destroys what God has made. Here is a romanticized Catskills landscape. Cole suggests progress is impossible and in wilderness we find our relationship to God.

Breakthrough asks if we can have it both ways. “Can we have a high-energy planet and thereby return land to nature, spare nature? Can we do God’s work of developing nature while sparing nature at the macro level?” posed Sagoff, who noted that nuclear energy introduced the idea of having it both ways — development as well as nature protection — due to nuclear’s small land footprint and lack of emissions.

“The first director of [the Department of Energy’s] Fermilab recognized resonance between the new lab and the frontier mythology of 19th century,” he said. “The Fermilab site was constructed to evoke romantic image of 19th-century life on original pristine Midwestern prairie with expanses of open land and bison and farms.”

Sagoff’s advice for ecomodernists: simplify simplify. Ecomodernism holds the view that “nature is to be developed at subatomic, molecular level” in order to make room for a “biblical nature of biodiversity, ecosystems, the Romantic and where God lives.” Ecomodernism must also change our conception of nature that is to be preserved. It’s not just primordial and ancient places but also novel ecosystems and gently used habitat.

Majority of Americans Could Be Ecomodernists

Ecomodernists should aim to appeal to the majority of Americans, not the 18 percent minority who tell Gallup they are environmentalists, counseled Reihan Salam. Public opinion can move quickly through “moral cascades,” like what is happening on gay marriage and marijuana legalization. “The new paradigm must offer a meaningful, robust, boots-on-the-ground strategy for what comes after the old paradigm collapses.”

Salam pointed to urban density as a winning issue for ecomodernists. Urban density spares the environment and also can provide affordable housing, which is a social justice issue. If San Francisco had the population density of all five boroughs of New York City it would have 1.2 million people. Currently, it has only 850,000 people and is experiencing a severe lack of low-rent housing.

“In coastal California,” Salam noted, “the places that are most ideologically liberal give out the least number of housing permits. That’s really interesting because it’s exactly opposite of what they ought to be doing if they care about the environment.” Ecomodernists should engage that community, and activate those feelings, perhaps even feelings of guilt that their motivations are selfish.”