Global Conservation on a Used Planet

A Democratic Vision for the Anthropocene

For over a decade, landscape ecologist Erle Ellis has marshalled an enormous trove of archaeological, paleontological, and historical evidence to demonstrate that humans have been terraforming the Earth for many, many millennia. A planet that once could support perhaps a few million humans today supports seven billion. Humans today use over half the terrestrial planet, mostly to grow food and raise livestock but also for settlements, mining, energy, and timber production. Even the areas of the planet that haven’t been intensively managed by humans bear the signature of our presence and our impact in one way or another.

In so doing, Ellis has complicated two longstanding environmental ideas. The first being the notion that human transformation of the biosphere has been a relatively recent development and the second, relatedly, that there is some scientifically discernible baseline to which nature, as distinct from humanity, might be returned.

For doing so, Ellis has been demonized in some quarters, accused of counseling complacency in the face of new and catastrophic ecological threats. If human transformation of the planet is an age-old phenomena, then why worry about present-day affronts to the environment? And if there is no baseline or original state to which nature might be returned, then why bother with conservation?

In a new Breakthrough Journal essay, Ellis offers a convincing case for why we should care about conservation, what it will take to preserve our natural inheritance as human societies evolve through the 21st century, and how conservation must be understood to be an ongoing and long-term social and cultural project. Far from being sanguine about the loss of biodiversity, Ellis challenges us to create a future rich with wildness. “If you aspire to live on a planet where wild creatures roam unhindered across wild landscapes,” he writes in the opening paragraphs, “this is not the planet you are making.”

Ellis argues that because Nature has co-evolved with human societies, it is as much a product of human social and cultural evolution as are our societies. For this reason, global conservation, he suggests, “is far more likely to emerge as a shared social project evolving from the bottom-up aspirations of the world’s people, their societies, and their dynamic environments over the very long term” than through top-down technocratic initiatives. That will depend in turn, Ellis says, on our ability to inspire and promote collective aspirations based on “the abiding human love and concern for wild nature.”

Ellis’s detractors have predicated their attacks on his work upon a rhetorical sleight of hand, transforming Ellis’s conviction that continuing social learning and technological innovation might allow for good outcomes for people and nature in the Anthropocene to the much stronger statement that those capabilities will assure good outcomes.

Ellis’s latest piece should establish once and for all that he makes no such claim. Good outcomes in the Anthropocene will depend upon the decisions that humans collectively make. Will we be able to grow food and produce energy in ways that will allow us to leave more room for nature? And will we choose to do so with the foresight to not only leave more room for nature but also to connect those areas across human-dominated landscapes that will continue to be densely settled and intensively farmed, so that biodiversity can flourish on a used planet with a changing climate?

Ellis’s vision is expansive and ambitious. But it also recognizes that there is no path toward global conservation objectives that can avoid the messiness, uncertainty, compromise, and negotiation that all democratic politics requires. Your thoughts, comments, and responses as always are welcome. 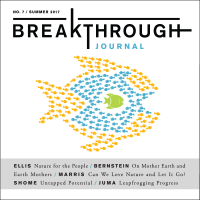