Today is Earth Overshoot Day, the day when, according to the Global Footprint Network, “humanity has exhausted nature’s budget for the year.” By the end of the year, we are told, humanity will have consumed 1.6 Earths’ worth of renewable biological resources.

Considering all the defaunation, pollution, freshwater depletion, and climate change caused by humans, the idea of global ecological overshoot seems commonsense. Farms, production forests, and cities together take up nearly half the Earth’s ice-free land, displacing and fragmenting natural habitats.

Yet the entire overshoot of the Ecological Footprint, the sustainability indicator developed by the Global Footprint Network, comes from one source: carbon dioxide. It doesn’t show ecological depletion for any other category it measures, including cropland, grazing land, forests, fishing grounds. That’s not because environmental impacts aren’t significant, but because the Ecological Footprint is a fundamentally flawed indicator. Here’s why we need to scrap it.

Think of the Ecological Footprint as the double-entry bookkeeping for natural resources. On one side of the ledger is the demand for resources like fish or timber. This is called the footprint of consumption. On the other side is the supply or “biocapacity” — the amount of resources ecosystems are able to generate every year, such as the annual growth of forests, or the rate at which fish stocks regenerate.

Consume more than your sustainable annual supply, the Ecological Footprint suggests, and you’re in ecological deficit, drawing down stocks of natural capital rather than living off the ecological interest they generate. Consume less, and you’re in surplus.

The Ecological Footprint can be applied at different scales, from the city level, to a country, to the entire globe. For countries, the annual domestic production of resources like crops and timber is compared with the consumption of these resources by the country’s population. If a country’s population consumes more of these resources than it produces, it’s in ecological deficit. But all this really tells us is that the country is meeting some of its demand through imports.

To be in ecological balance or surplus, a country has to be self-sufficient in crops, pasture, fish, and so on. But the Ecological Footprint doesn’t tell us whether these goods have been produced in a sustainable manner. Thus Belgium, a small country with limited farmland and forests, is deep in the red, whereas Finland, with lots of forest but similar per-capita consumption of resources, is in the green. The Ecological Footprint is not a measure of a country’s sustainability, it’s a measure of its ecological autarky.

At the global scale, given there are no other planets to trade with, the Ecological Footprint simply compares global supply and demand of renewable biological resources. To understand what global overshoot means, one needs to look at each of the individual land-use categories. Take cropland, for example. For cropland, demand is equal to the amount of crops harvested per year, and supply is equal to annual crop production. Naturally, these two figures are nearly identical — we harvest and consume the crops that we grow.

Supply and demand are in near balance for grazing land and built-up land as well. As William Rees of the University of British Columbia and Mathis Wackernagel, president of the Global Footprint Network, note, “the global Footprint of cropland, built-up land, and grazing land as currently measured can only be less than or equal to the respective biocapacity” (emphasis in original).

The results for cropland, grazing land, and built-up land are laughably trivial, answers to a meaningless question. But in a sense the implications are far worse. They suggest a form of sustainability in which we know that farming causes pollution, water depletion, and deforestation. These are all important sustainability concerns — but none of them are captured by the Ecological Footprint.

But if there is in fact depletion, wouldn’t we want a metric that could measure it?

With cropland, grazing land, and built-up land in ecological balance, and fishing grounds and forests in surplus, only carbon is left to account for virtually the entire global ecological overshoot. Here, the Ecological Footprint indicates — surprise surprise — that forests and oceans do not absorb all the carbon dioxide emitted by humans.

In effect, what the 0.6 Earths’ worth of overshoot tells us is that we would need about three times as much forest in order to eliminate net emissions to the atmosphere. (If global forests would someday become a net source of carbon — an all-too-plausible scenario under climate change – the Ecological Footprint would become infinite, since no amount of forest could then offset our emissions.)

The very choice of forests as a proxy for the scale of the climate problem is arbitrary. We could just as well measure it in terms of how many wind farms we would need, or solar panels, or nuclear plants.

At the end of the day, the Ecological Footprint does the job it sets out to do — answering the question of whether humanity uses more biomass than croplands, grazing lands, and other ecosystems can produce, and whether forests can absorb all our carbon emissions. The conclusion: we’re in ecological balance or surplus for all categories bar carbon emissions. 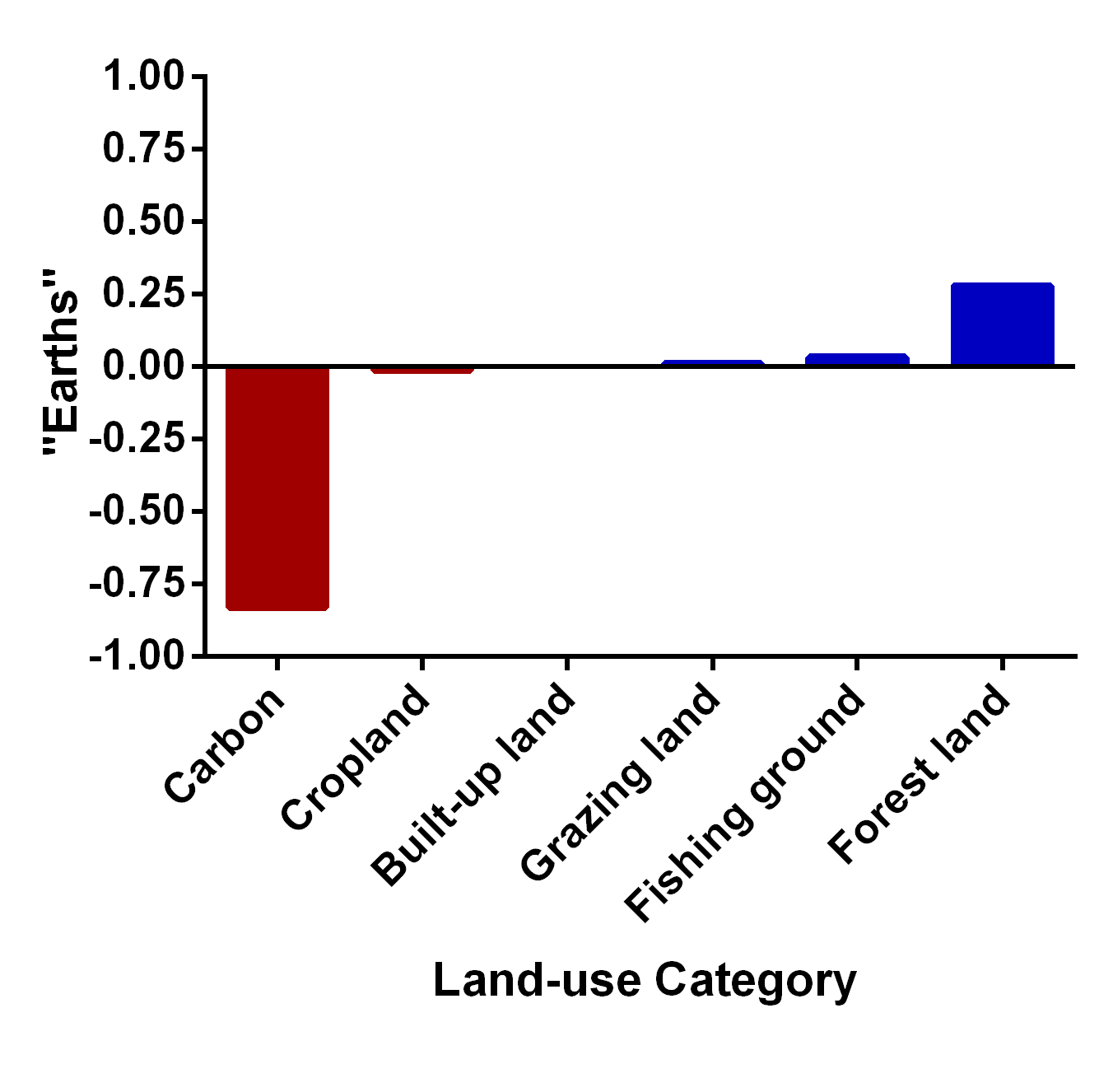 Net biocapacity (biocapacity minus footprint of consumption) by land-use category, shown as a fraction of total global biocapacity (one “Earth”) in 2008. Red bars indicate deficit, blue bars surplus. The sum of the net biocapacity of all land-use types is approximately −0.5, corresponding to the claim that humanity is using “1.5 Earths” worth of biocapacity every year. Graph from “Does the Shoe Fit? Real versus Imagined Ecological Footprints” by Linus Blomqvist et al., DOI: 10.1371/journal.pbio.1001700

The Ecological Footprint, however, does not indicate that we’re unsustainably harvesting crops, fish, pasture, or timber. In other words, it’s not that the Ecological Footprint is wrong, per se, although the implication of sustainability is in many ways misleading. It’s that, despite its grand claims of global ecological overshoot, its real findings are trivial to the point of being banal.

Let’s scrap the Ecological Footprint and start measuring our carbon footprint directly, in terms of carbon-dioxide equivalents, and use other, more meaningful metrics for the sustainability of farming, forestry, fisheries, and other activities. The world will be wiser for it.