Ammonia is Everest Base Camp for Clean Energy

In September 1987 twenty four countries signed the Montreal Protocol, beginning the phaseout of chlorofluorocarbons (CFCs) and other materials that destroy the ozone layer. The international community decided the impact of a small group of industrial chemicals was simply too dangerous, and outlawed them.

Perhaps it is time to take a hard look at another industrial chemical with dangerous global warming impacts — ammonia. Specifically, ammonia that is produced from fossil carbon, with high CO2 emissions. Fossil ammonia.

A phaseout of fossil ammonia would do more than cut CO2 emissions from the fertilizer industry. It is in fact an innovation policy in disguise. The real effect is to drive the technological innovation we need to take on the main game — the decarbonization of energy.

Ammonia is indispensable, and I am not suggesting a phaseout of ammonia itself, but rather ammonia made from a very specific industrial process — the greenhouse intensive Haber-Bosch synthesis using natural gas.

Ammonia, NH3, is a simple molecule made up of nitrogen and hydrogen. In the Haber-Bosch process nitrogen from the air reacts with hydrogen to make ammonia. So far so good. The problem is the source of the hydrogen.

The Haber-Bosch process makes ammonia from nitrogen and hydrogen

Hydrogen is widely conceived of as a ‘clean’ material. It could be, but in practice it is made from natural gas, which is methane, or CH4. The methane is combined with hot steam, releasing hydrogen but also producing carbon dioxide. For every tonne of hydrogen, 5.5 tonne of CO2 is released. Though there are clean alternatives, almost all hydrogen comes from natural gas. Today’s hydrogen is a fossil fuel byproduct, the result of mining, or fracking.

Made with this fossil hydrogen, ammonia is a large greenhouse emitter. In 2010 world ammonia production was 157m tonnes, with CO2 emissions of 300m tonne, about 1% of world greenhouse emissions. 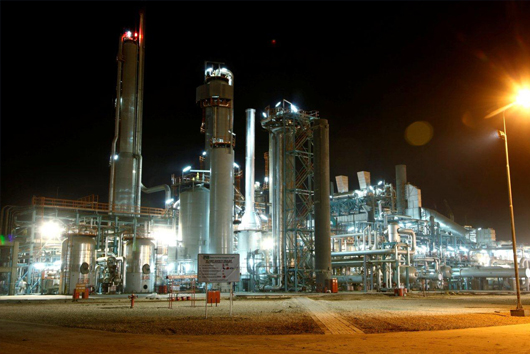 The good news is there are other ways to make hydrogen, with practically no emissions. Electrolysis of water using renewable energy or nuclear power is one way. This is quite inefficient and expensive, and is not carried out at large scale.

But the efficiency could be doubled by performing the electrolysis at high temperatures, up to 850 ºC, using nuclear or renewables for heat and electricity, which could produce hydrogen at a cost competitive with fossil sources.

We can also use thermochemical cycles, such as the sulphur-iodine cycle, that use a sequence of chemical steps to split water. All the intermediate chemicals are reformed within the cycle. There are no waste products, only water is consumed, producing hydrogen without emitting any greenhouse gases. 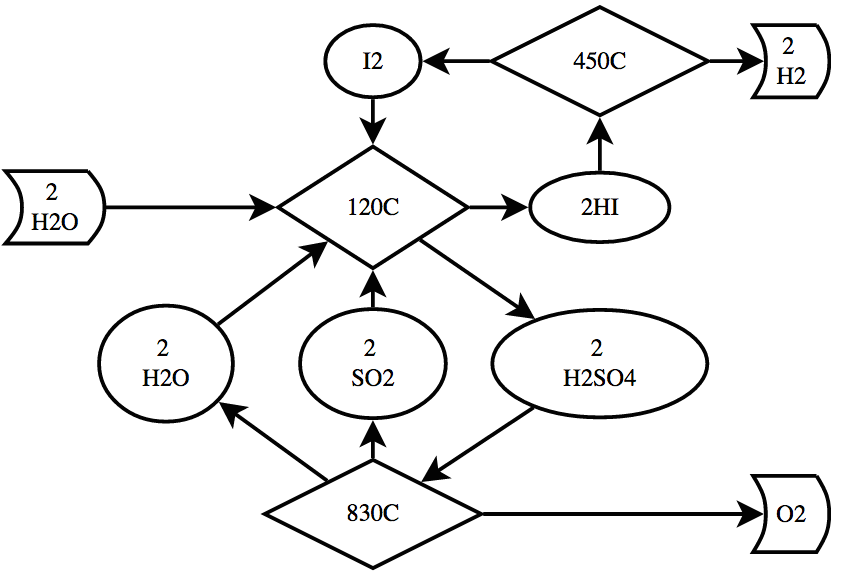 Then there are hybrid processes that combine thermochemical cycles with electrolytic steps, such as the copper-chlorine cycle which runs at a more accessible 530 ºC. This cycle is expected to be cheaper than current steam reforming methods at larger scales, above 10 tonne per day.

One particularly intriguing clean hydrogen process actually continues to use fossil methane as the hydrogen source. Methane ‘cracking’ breaks CH4 into hydrogen and solid carbon. A remarkably simple process has recently been described — bubbling methane through a column of molten tin splits off hydrogen, leaving pure carbon floating on top, which can be removed and buried. This is precombustion carbon capture and storage. The resulting hydrogen, though fossil in origin, produces zero CO2 emissions. 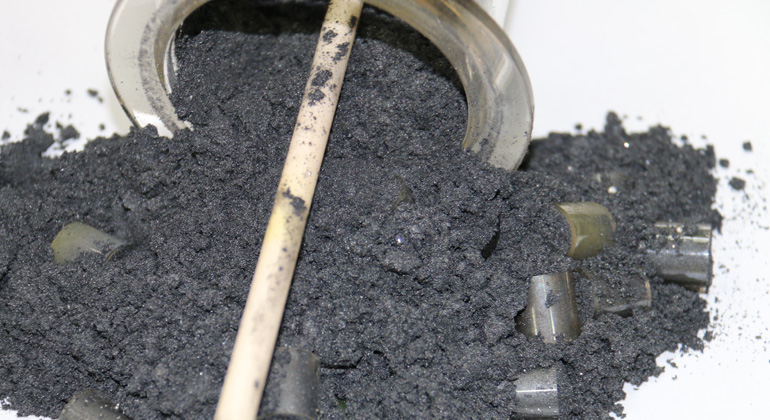 Methane cracking could be a game changer for clean ammonia because it keeps most of the existing infrastructure. Ammonia plants are already supplied with methane. Cracking could replace the conventional steam reformation process while keeping the balance of plant, and does not have to wait for the development of a new clean hydrogen supply chain.

In Solid State Ammonia Synthesis (SSAS) water electrolysis and ammonia synthesis are combined in a single step. A hot ceramic membrane separates water vapour on one side and nitrogen on the other. An electric current strips protons from the water, which pass through the membrane and react with nitrogen to make ammonia.

There is no need for hydrogen at all in this process. And provided the electricity and heat come from nuclear or renewables there are no CO2 emissions.

None of these new clean ammonia processes has been deployed commercially. The high temperature electrolytic and chemical processes await availability of nuclear or solar heat sources, and methane cracking and SSAS require much process development. But all have been demonstrated and could be realized. Until then, carbon capture and storage (CCS) can be used now to decarbonize these plants.

Ammonia is Everest Base Camp for clean energy

Ammonia is only 1% of world greenhouse gas emissions. Eliminating these emissions would by themselves have no impact on global warming. Why then focus on ammonia? 1% of emissions won’t get people marching in the street.

But there is larger game afoot. Most of our CO2 emissions come from burning fossil carbon, to make electricity, to power transport, heavy vehicles, agricultural machinery and aircraft, and provide heat and raw materials to the petrochemical and process industries. Nearly all these processes can be substituted by the same technologies that are required to clean up ammonia.

These are all nascent technologies that must be developed if we are to move beyond carbon—further proof that we do not actually have the technologies we need to meet the COP21 climate goal of limiting global warming to 2 ºC.

Ammonia production is a much narrower technical context in which to develop these technologies than fossil fuel replacement. It is one input (fossil hydrogen) to one process (Haber-Bosch) in one kind of plant (ammonia) for one product (fertilizer) for one market (agriculture). Technology development is hard, and limiting variation, impacts and stakeholders weights the odds in favour of success. Ammonia is a ‘sandbox’ development environment for clean energy technologies.

Success with fertilizer would bring one more surprising benefit: ammonia is itself a zero emission vehicle fuel. Unlike hydrogen, it is readily liquefied, and can be burnt in internal combustion engines and jet engines. This makes it suitable for powering the heavy transport sectors that can’t be electrified — diesel powered prime movers for road freight, mining trucks, combine harvesters and tractors, and aviation — that don’t otherwise have good alternatives. 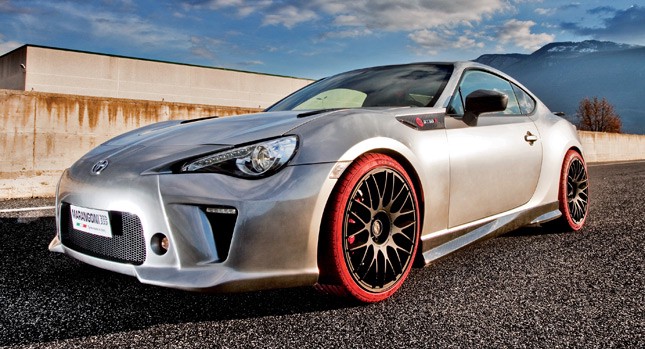 Ammonia is not the end; it’s the beginning. Ammonia is Everest Base Camp on the way to the summit of fossil fuels. Its only one percent of emissions, but success creates the technologies needed to clean up everything else.

Why treat ammonia as a special case, instead of simply another sector subject to an economy-wide carbon reduction scheme? If we simply priced carbon, surely ammonia producers would heed the price signal and mobilize technologies to decarbonize, in line with an increasing carbon price?

The short answer is, this hasn’t worked. The Paris agreement now includes no explicit reference to carbon trading, offsets, or other forms of carbon pricing. After twenty years of experimentation, carbon pricing has failed to produce anything more than marginal changes in the cost structure of production. And marginal cost changes do not drive step changes in the underlying production technologies.

The reason for this failure is well explained by Roger Pielke’s “Iron Law of Climate Policy”: When policies for economic growth collide with emissions reduction policies, economic growth always wins. Virtually all the energy input into the economy derives from carbon. Pricing carbon is hard because carbon is, essentially, the entire economy. The Iron Law ensures that any carbon price will remain low, which means it will only drive marginal improvements in technology.

Ammonia is not the whole economy. Like CFC’s, it is only one small sector, albeit a very important one. Economically, the scope is much more limited than a whole-of-economy carbon price. Instead of bearing the cost of decarbonizing the whole economy, we would decarbonize a small sector. But we’d do it completely. Even more importantly, we’d earn a fully developed commercial supply chain for the complete set of technologies needed to decarbonize fossil energy.

A strategic priority for Mission Innovation and Breakthrough Energy Coalition

After years of failure at global climate talks, a new direction emerged from COP21 in Paris: the need to develop new technologies to replace fossil fuels. A phaseout of fossil ammonia is an innovation policy disguised as an emission reduction initiative, and should be seriously considered at COP22 this year in Marrakech. The government-led Mission Innovation and the private sector’s Breakthrough Energy Coalition should adopt it as a strategic priority.

CFCs were phased out in a decade. Ammonia will take longer because the necessary technologies are more complex and less mature, and there can be no compromising the food supply.

But an early start could be made with CCS and water electrolysis in locales with cheap hydro- or nuclear electricity. A number of ammonia plants using hydroelectric electrolysis operated in the last half century, but most have closed, being supplanted by cheaper methane reformation. This technology could be revived, with more modern and cheaper electrolyzers, and the advent of methane cracking and small modular reactors would eventually allow ammonia production anywhere in the world.

Efficiencies can also accelerate the phaseout. The global nitrogen efficiency of cereal crops fell from 80% in 1960 to 30% in 2000, so there is a lot of room for the agricultural sector to respond to any short term restriction in fertilizer supply. A shift to diets that use less fertilizer, such as vegetarian diets, or genetically modified organisms like C4 rice, can also reduce pressure on the supply chain while the technology is in transition.

We’ve been here before

Agriculture has been through this process many times. There are many fertilizers and pesticides that were once thought indispensable that have been banned for health or environmental reasons. A notable precedent was the banning of DDT and other organophosphate insecticides under the Stockholm Convention, due to unacceptable ecological impacts.

The US EPA and similar organizations around the world police the use of chemicals in the food supply. The EPA also recently regulated CO2 emissions from power plants, as it views climate change as an environmental impact within its purview. It is wholly within precedent that the EPA would regulate agricultural inputs with high CO2 emissions, such as dirty ammonia.

Consumer activism was critical to the CFC phaseout. As early as 1975 the Natural Resources Defense Council urged consumers to boycott CFC-based aerosols. Consumer pressure led to McDonalds eliminating CFCs from its packaging, and campaigns around the world ensured the success of the Montreal Protocol. Consumer groups concerned with global warming, the integrity of the food supply, and natural gas extraction might well get behind elimination of dirty ammonia.