Last week the Japanese government announced that it would adopt a new emissions reductions target:

A government panel on measures to tackle climate change approved on Friday a new goal to reduce the nation’s greenhouse gas emissions by 3.8 percent by 2020 from the 2005 level ...

Prime Minister Shinzo Abe said he is sure that Japan can substantially contribute to global efforts to tackle climate change. The government will steadily implement necessary measures to achieve the new emissions reduction target, he said.

The new goal means a setback from the target of reducing emissions by 25 percent from 1990 by 2020, which was set in 2009 by the administration led by the Democratic Party of Japan. The DPJ is now an opposition party.

In a 2009 paper, I explained why Japan's proposed emissions targets were unrealistic and would almost certainly not be met. (Paper here, open access. Note a figure correction here.) 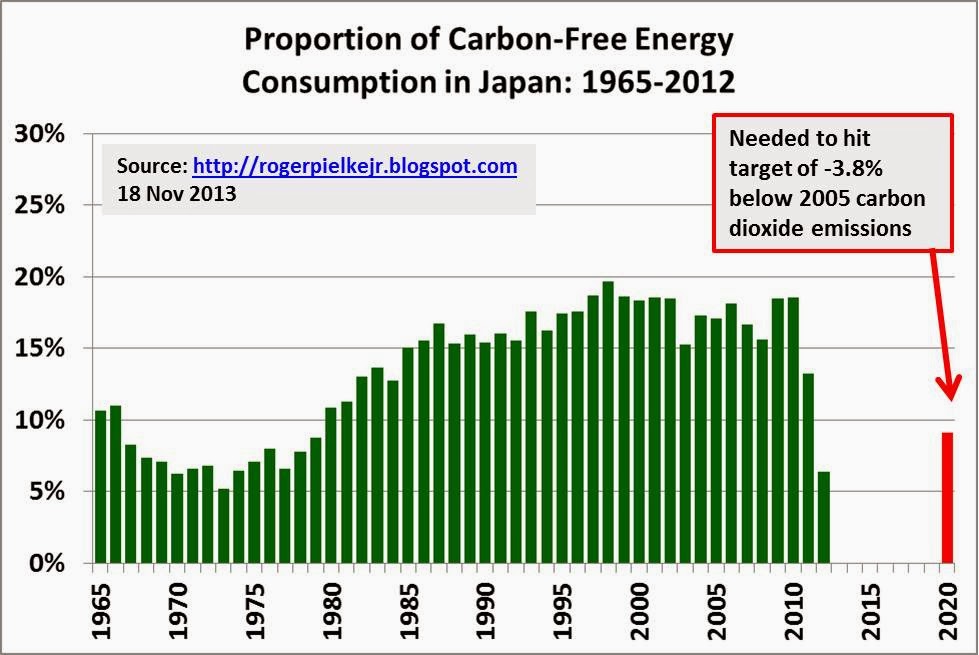 The graph above shows the implications of Japan's new emissions reduction target (3.8 percent below 2005 levels) in terms of implied carbon-free energy. The graph considers only carbon dioxide and is based on an assumption of no change in demand from 2012 to 2020.

The graph shows a few things worth pointing out (data from BP 2013):

The new emissions target is perhaps the clearest indication yet that Japan's government, despite being pro-nuclear, does not see a return to the levels of nuclear power that existed prior to Fukushima. The Japanese government has said as much:

Japan’s environment minister, Nobuteru Ishihara, said that the new target “does not consider the possible effect of nuclear power plants reducing emissions” and that Japan “would set a more definite target” once it settled on what sources of energy it would use in the future.

The Japanese government appears to have read The Climate Fix:

"We're down to zero nuclear; anyone doing the math will find that target impossible now," AFP reported Ishihara saying in Tokyo after announcing the new target. The original goal was "unrealistic in the first place," he said. "The current government seeks economic growth while doing our best to meet emissions targets."