This post is coauthored by Alex Trembath and Michael Shellenberger

The recently released final rule of the EPA Clean Power Plan projects to reduce US power sector carbon emissions by 32 percent under 2005 levels by 2030. That's awesome. But by allowing existing nuclear capacity to close and be replaced by fossil fuels, the CPP jeopardizes almost one-half of EPA's emissions reduction goals from 2013 to 2030.

The United States has already reduced emissions under 2005 levels by about 15 percent, according to the Energy Information Administration. Allowing existing nuclear to close would bring the further 17 percent decline in emissions below 2013 levels down to about a 10 percent decline.

How can this be the case? Let us explain.

The Clean Power Plan provides incentives for states to reduce power plant emissions by installing new zero-carbon energy (nuclear and renewables), by improving fossil-fired power plant efficiency, and by switching from coal to natural gas. What the CPP doesn't do is provide incentives for states to extend the licenses of existing nuclear power plants, which provide over two-thirds of America's zero-carbon electricity generation.

The reasons for this are less than clear. In their draft in June 2014, the EPA proposed that preservation of existing nuclear capacity of would be considered. But they changed their mind in the final rule, writing, "On further consideration, we believe it is inappropriate to base the BSER [best system of emission reduction] on elements that will not reduce CO2 emissions from affected [fossil plants] below current levels. Existing nuclear generation helps make existing CO2 emissions lower than they would otherwise be, but will not further lower CO2 emissions below current levels" (EPA CPP, p. 324).

Perhaps from a legal and regulatory standpoint, the EPA had to make this change in their rules. Whatever the case, it's clear that not incentivizing extensions or license renewals violates the spirit of the Clean Power Plan, which is to reduce US emissions.

How significant is this impact? In the graph below we've compared the avoided emissions from the five nuclear reactors currently under construction in the United States; all the added non-hydro renewables between 2020 to 2030 under the Clean Power Plan's projection; and the 22 gigawatts of nuclear power that could close by 2030 if plant licenses are not extended. 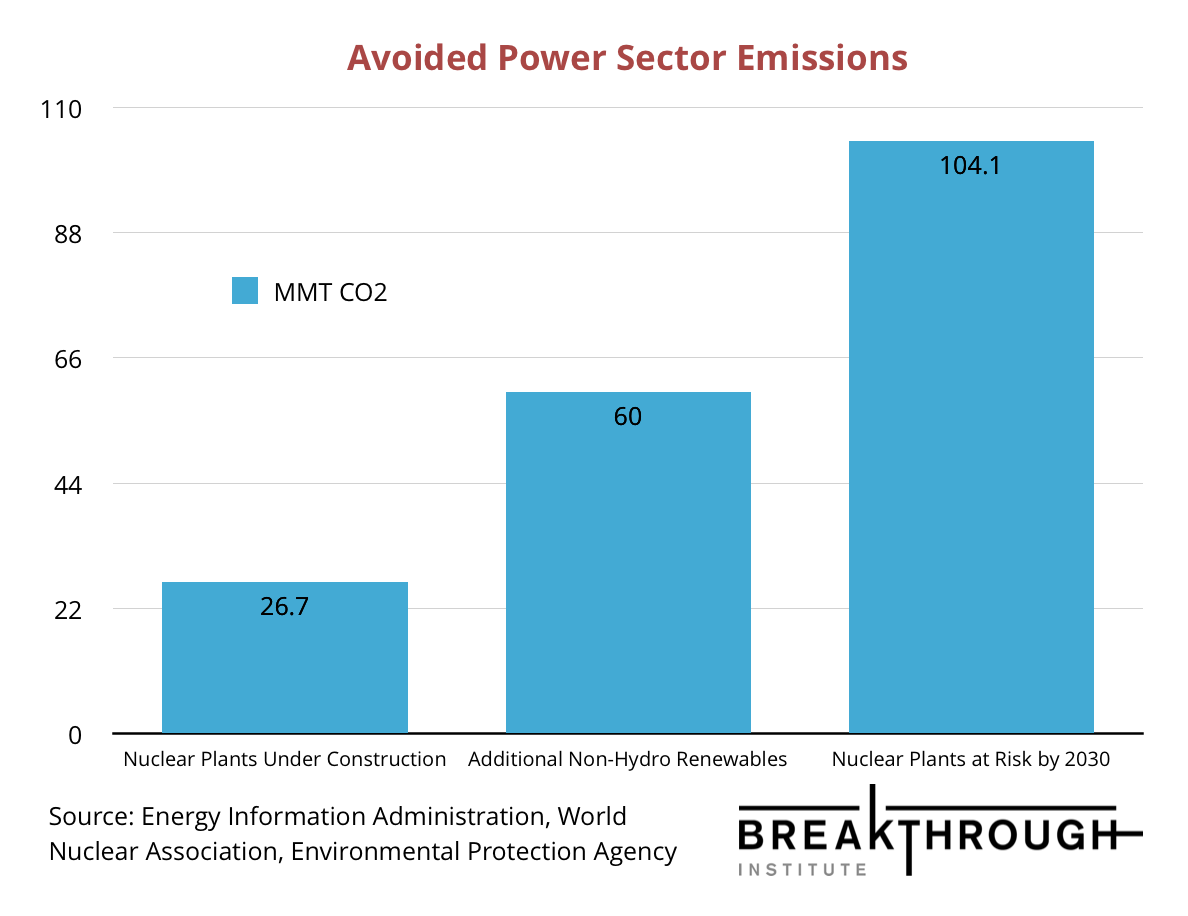 As the graph shows, the US power sector risks increasing carbon emissions by 104 million tons if license extensions are not granted to at-risk plants. Again, this is entirely permissible under the Clean Power Plan, which allows nuclear plants to be decommissioned and replaced with fossil energy as long as the new fossil energy has a carbon intensity below the state-level target set by the EPA.

Why is the EPA ignoring such a large amount of US nuclear capacity that could close by 2030? That's also unclear. The World Nuclear Association provides the above estimate that 22 GW will close by 2030, assuming that plants are retired as they reach their 60-year lifetimes. For some reason, the EPA assumes that nuclear capacity will remain functionally unchanged, from 99 GW in 2014 to between 99 and 101 gigawatts in 2030 (see p. 3-31 of the Regulatory Impact Analysis). 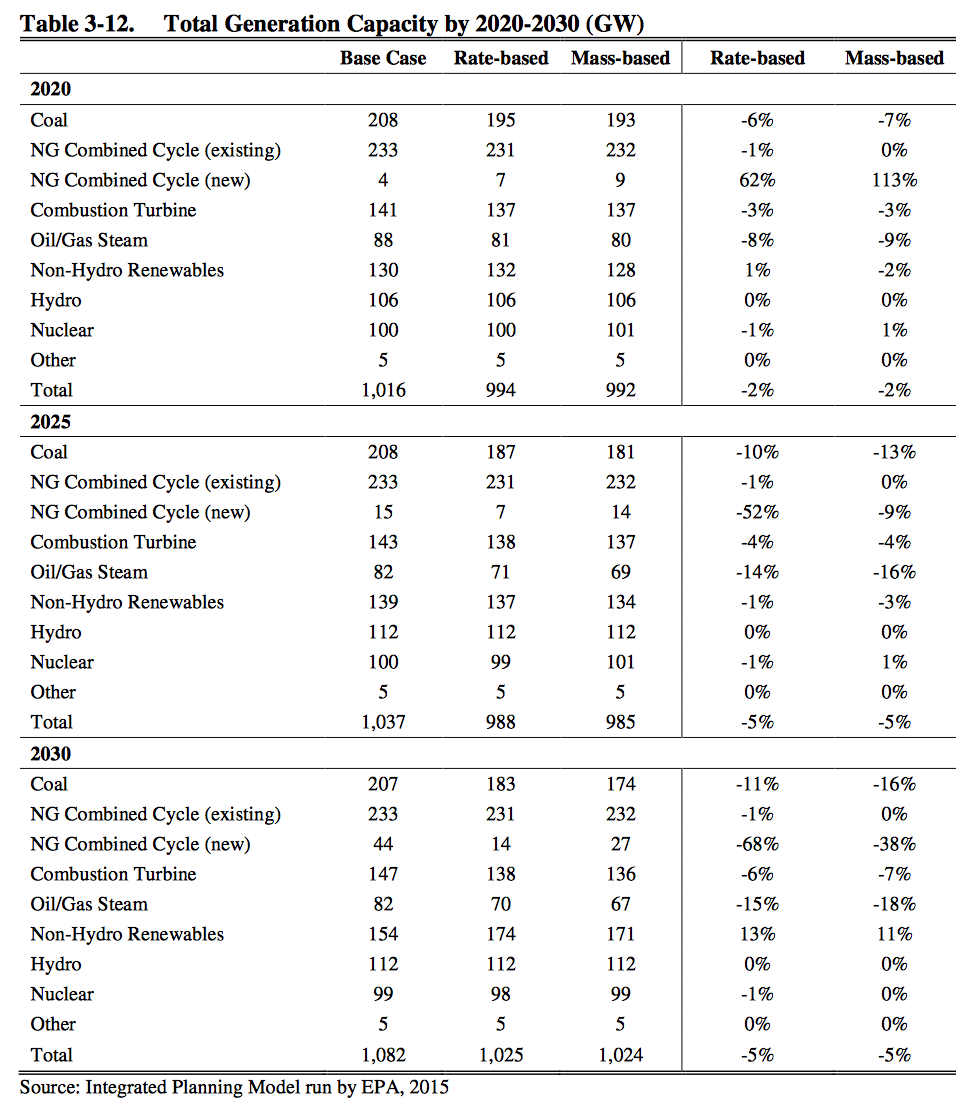 How much does the 104 million ton increase of CO2 matter for US emissions? A lot, it turns out. The EPA projects that by 2030, US power sector carbon emissions will decline to 1,812 MMT CO2, down 241 MMT from 2013 levels (see p. ES-6 of the RIA). So almost one-half of the CPP's emissions reductions are at risk of being obviated by their omission of existing nuclear capacity. 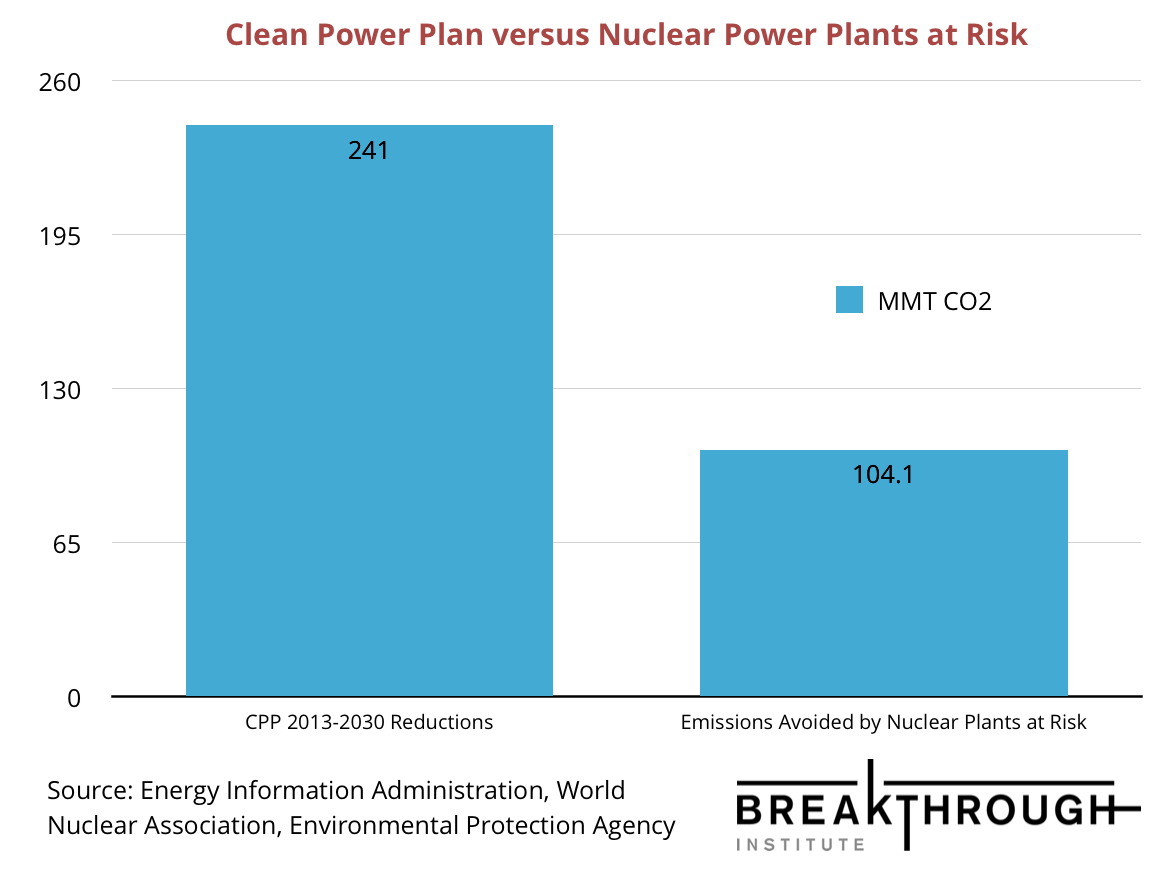 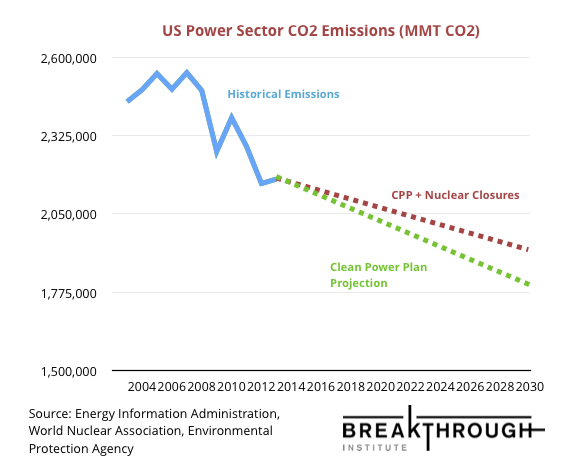 Again, it's not clear that EPA has the legal authority to incentivize the extension of existing nuclear capacity's licenses (although a year ago, they appeared to consider it). Likewise, keeping existing nuclear plants open is far from the only thing necessary to reduce US emissions, in and especially outside the power sector. But if EPA's goal is to keep the US from emitting more carbon, they might fail in a big way with this omission.