The wild artistic license of movies like Gasland notwithstanding, the common feeling in the media and, therefore, among the public, is that fracking is causing significant environmental damage (Energy Justice). However, it seems that fracking may be getting a bum rap, at least from the standpoint of toxic emissions.

At the end of January, RAND published a paper in Environmental Research Letters (ERL) assigning monetary damages to environmental health caused by emissions from shale gas extraction in Pennsylvania during fracking operations. The RAND study estimated these damages to range between $7.2 and $32 million dollars in 2011.

They compared this to the $75 million in estimated annual damages produced by the state’s single largest coal-fired power plant in 2008 conceding that the former was relatively small. However, the study suggested that these damages may be of larger local concern in counties and regions where shale gas extraction is concentrated (Rand Blog).

At the same time as this study appeared, the Pennsylvania Department of Environmental Protection (PA DEP) issued a proposal for tougher emission standards for general permits (GP-5) for natural gas-fired engines and other equipment at compressor stations which are facilities needed to get natural gas moving through pipelines. These rules impose emissions limits that are up to 90 percent stricter than existing limits.

Since about 75% of the estimated damages result from compressor station activities, these new standards address the fugitive emissions issue in the exploding shale-gas industry in the state. These sites also will continue to emit pollution for years to come.

PA DEP conducted short-term air quality monitoring studies in the southwest, northeast and north-central regions of Pennsylvania in 2010. The studies could not identify concentrations of any compound that would trigger air-related health issues associated with Marcellus Shale drilling activity, nor did PA DEP detect any concentrations above federal ambient air quality standards for carbon monoxide, nitrogen dioxide, sulfur dioxide and ozone at any of the sampling sites.

So is fracking making things worse? Or better? And by better, does that mean just less worse, or is it really better, like going down the path that actually will protect the environment in the long-run?

Recent studies by PA DEP have shed some light on these questions. The studies show that the new builds in gas-fired power plants and the associated surge in fracking over the last few years have dramatically reduced emissions across the State, emissions of every sort – deadly particulates, heavy metals, and the NOx and SOx which are those nasty components of smog that also cause acid rain and a lot of health problems.

Just last Tuesday, PA DEP released its latest report on emissions from unconventional shale gas extraction operations in the state (PA DEP emission study). The results (shown in the table below) compare emissions data between 2011 and 2008 (when gas drilling and fracking really took off) from all point sources, such as power plants, and from natural gas production and processing facilities, such as wells and compressor stations. 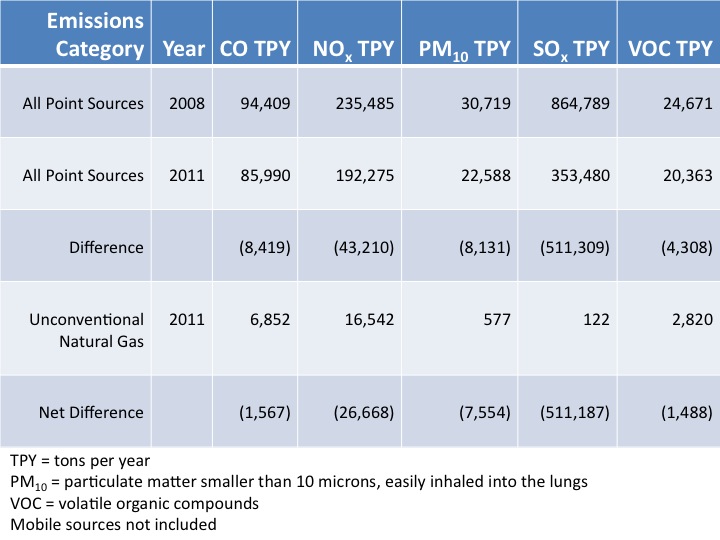 Table from the recent PA DEP report on emissions from unconventional shale gas extraction operations in the state, comparing emissions data between 2011 and 2008, when gas drilling and fracking really took off. Source: PA DEP

“The data shows that emissions from drilling represent a small fraction of air pollution in the state, which has gone down considerably since shale gas development began in earnest several years ago,” PA DEP Secretary Mike Krancer said.

While unconventional gas production and processing emitted over 16,500 tons of nitrogen oxides in 2011, annual emissions of the same pollutant from all sources fell about 43,000 tons per year since 2008. Annual sulfur dioxide emissions are down more than 500,000 tons per year from where they were in 2008. Sulfur dioxide emissions from natural gas use are a miniscule 122 tons. Emissions of fine particulate matter (PM10) and volatile organic compounds (VOCs) are also down. While not the largest number, PM10 is certainly the most dangerous and is the primary reason coal kills so many people per year.

So just using the sulfur dioxide reductions, and using the same EPA damage calculations (fewer sick days, lower health care costs, longer life, etc.), PA DEP deduced that the rise in natural gas use has saved $14 to $37 billion (that’s with a b) in terms of annual public health benefits. Compared with the RAND analysis of damages from gas extraction of $7.2 to $32 million dollars in 2011 (that’s with an m), these are huge benefits.

As bad as fracking and other issues that may arise from increased natural gas use may be, they pale in comparison to the effects of the displaced coal. It will be a long time before any negative impacts could approach this level of benefits. In fact, if natural gas replaces all of coal use, the benefits will still outweigh any disadvantages by orders of magnitude.

But for the biggest emission on everyone’s mind, greenhouse gases, natural gas also beats coal, emitting about two-thirds of the carbon-equivalent of coal, even with fugitive methane emissions. Oddly enough, and basically as a by-product of the rise in shale gas and the effects of the recession, the United States led the world in greenhouse gas emission reductions over the past five years, eliminating about 350 million tons of CO2.

Finally, from the economic side, according to the Pennsylvania State Department of Revenue, the gas industry has paid more than $1.6 billion in state taxes. They also provided $204 million in impact fee revenue, which resulted from Act 13 that Governor Corbett signed into law a year ago that imposed a per-well fee. Royalties paid to landowners have exceed $1 billion.

These new emission numbers for gas become even more important if carbon-trading or taxing occurs as these schemes presently undervalue the relative effects between gas and coal. Many think we are destined to become a natural gas nation because natural gas is considered a bridge fuel from coal to the non-fossil fuels. But between the economics and the perceived benefits, we just might get stuck in the middle of this bridge for a long, long time.