Natural gas has been rapidly replacing coal power in recent years, driving down U.S. emissions faster than in any country in the world. But to some renewable energy advocates who have long prophesied that solar and wind are on the cusp of replacing coal, such a reality can't possibly be happening.

Such appears to be the case with the Rhodium Group, which claimed recently that non-hydro renewables like solar, wind and biomass are responsible for 58% of recent US decarbonization, compared to only 38% for natural gas.

How does Rhodium claim that solar and wind had a greater impact than gas, even though the EIA shows that gas increased last year ten times more than wind, and nearly one hundred times more than solar? By using improper assumptions, and inventing a bizarrely indirect way of measuring what matters.

But this completely ignores the energy intensity effect in the power sector. Switching from coal to gas not only reduces the carbon intensity of the energy supply, but also reduces the energy intensity of the economy, since cheaper gas forces shut-down of less efficient coal-fired power in favor of more efficient combined-cycle gas turbines (combined cycle plants have about twice the thermal efficiency as coal plants). It is due to this effect, along with economy-wide sectoral shifts and increased end-use efficiency in other sectors, that Climate Central and the Energy Information Administration find energy intensity declined about 10% in 2012 under 2005 levels. Rhodium's methodology would suggest that about 170 million tons of CO₂ emissions are avoided by the switch to natural gas, much less than the 300-500 tons estimated by the National Renewable Energy Laboratory, former Pennsylvania Department of Environmental Protection director John Hanger, and UC San Diego energy expert David Victor. Most analysts agree that natural gas is the largest factor in recent US emissions reductions.

By comparing 2012 energy intensity to a counterfactual as opposed to 2005 levels, and by ignoring the energy intensity improvement from the coal-to-gas switch, Rhodium dramatically underestimates the emissions reductions from natural gas.

Second, Rhodium engages in sleight of hand. Their definition of non-hydro renewables includes liquid biofuels, which are almost entirely supplied by conventional corn ethanol. Rhodium's assumption is that a gallon of biofuel displaces 100% of the emissions of a gallon of conventional oil. But taking land-use and other life-cycle effects into consideration, the actual emissions improvement of corn ethanol is closer to 20%, at best. So they overstate the emissions reductions from biofuels by at least a factor of five. In the power sector, they assume that renewables like wind, solar, and biomass displace coal generation 100%—an erroneous assumption uninformed by a familiarity with electric power systems.

In fact, there is a way to make a reasonable estimates for total CO₂ displaced by non-hydro renewables. Instead of twisting ourselves in a knot calculating all emissions reductions against a counterfactual scenario, we can look at actual emissions displacement of actual generation.

Renewables, because they provide variable power, displace whatever power generation is on the margin in their region. This can be coal, but is far more often natural gas.

A recent analysis by the Colorado School of Mines (Kaffine et al 2012) found that while the average CO₂ output of coal-fired power is 1.1 tons per MWh, the average emissions displacement effects of wind power vary from 0.29 tons (in California) per MWh to 0.92 tons per MWh (in the Midwest). In the Pacific Northwest, the emissions displacement effect of wind generation is a mere 0.08 tons per MWh due to the high penetration of hydroelectric power in the region.

Because of this significant regional variability, there is no national estimate for emissions displacement from renewables. But using a wide range between 0.3 and 0.9 tons CO₂ per MWh, we can estimate the rough amount of CO₂ displaced by non-hydro renewables generation. 2012 saw an increase of 112,867 GWh of electricity generation from non-hydro renewables over 2007, over 90% of which came from wind. Using our range of 0.3-0.9 tCO₂/MWh, this works out to about 34-102 megatons CO₂ displaced by wind, solar, biomass, and geothermal combined in 2012. 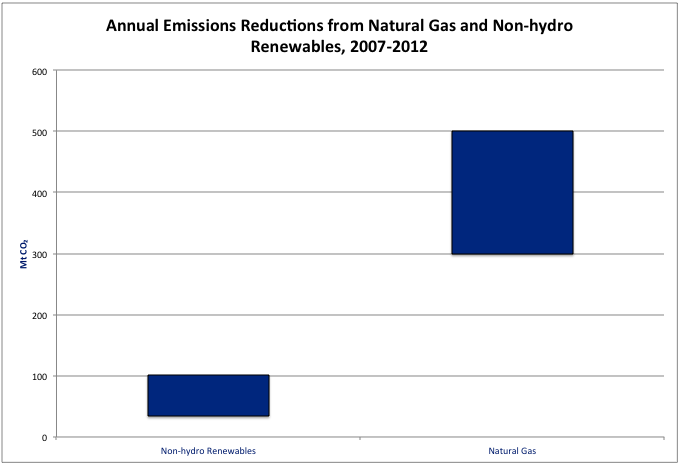 1. The coal-to-gas switch in the United States is responsible for at least 3-10 times the emissions reductions of non-hydro renewables.

2. The emissions displacement of solar/wind is about half what Rhodium assumes and the emissions benefit of biofuels is at least 5 times lower than the Rhodium Group claims.

3. The Rhodium analysis ignores the energy intensity improvements unlocked by switching from coal to gas.