While I was working on The Climate Fix I published several peer-reviewed articles on climate policies in the United Kingdom, Japan, and Australia. In recent months I have updated these analyses and will summarize the updates here. 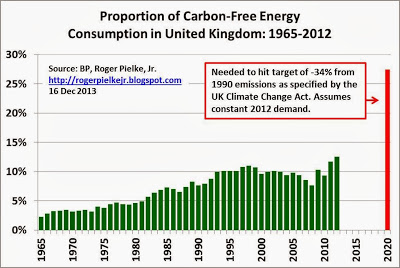 In my 2009 paper (here, open access) on the emissions reduction targets mandated by the UK Climate Change Act, I wrote:

In a recent update to this analysis I wrote:

The magnitude of the challenge can be seen in the graph at the top of this post, which shows how much carbon-free energy the UK would need if it is to meet the 2022 targets of the Climate Change Act. Even though the proportion of carbon-free energy in 2012 is the highest since 1965, that proportion would have to more than double in less than a decade while retiring an equivalent amount of coal (i.e., almost all of it).

Hitting the targets seems impossible, however there are of course alternative outcomes:

Of course it is possible that targets could be met via creative strategies such as the use of offsets or the counting of emissions reductions in gases other than carbon dioxide. However, such strategies, irrespective of their inherent merits, would only postpone the decarbonization needed in the power sector if deep emissions reductions proposed to 2050 are to be met. Of course, the main consequence of adopting a decarbonization target for 2030 might be to simply move the goal posts further into the future to reset the emissions challenge, as it appears that the shorter-term targets are likely to be missed.

The politics of the UK climate targets will be interesting to watch as it becomes increasingly clear that the targets cannot be met, at least in terms of their intended purpose of achieving a faster rate of decarbonization. Signs of life in the UK economy suggest that meeting the targets may be even more difficult than suggested here (e.g., if growth exceeds 2% per year) but at the same time would likely make their abandonment or alteration much more politically acceptable. 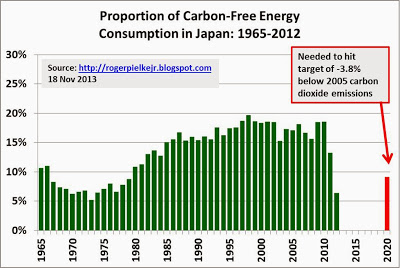 In my 2009 paper on Japan's emissions reduction targets (here, open access), which at that time had been just made less unrealistic, I wrote:

Japan faced a range of criticism when it announced its 2020 target to reduce its domestic emissions by 15% from 2005 levels by 2020. The analysis in this letter shows that such criticism was unfounded for several reasons.

First, the rate of decarbonization implied by the 2020 target is about 1.4–1.8% yr–1 less than that implied by the UK Climate Change Act (Pielke 2009) and that Act is certain to fail (e.g., it requires that the UK decarbonize its economy to French levels within 6 years, requiring an effort equivalent to the deployment of about 30 new nuclear power plants in that time). Because no one knows how fast a major economy can decarbonize there seems little point in arguing about proposed rates of decarbonization well outside historical experience. Policy implementation will be the ultimate arbiter of such proposals. There is essentially no qualitative difference between the Japanese and United Kingdom policies, as both are outside the range of experience.

At the time, as part of meeting its proposed targets the Japanese government proposed building new nuclear power plants at the rate of one per year. That was before Fukushima. Even then I wrote:

The proposal to deploy nine new nuclear power plants within a decade appears to stretch the bounds of credulity, even though Japan does have the third most nuclear plants in the world (after the United States and France) . . .

Recently, I provided an update of this analysis post-Fukushima, and on the occasion of Japan announcing a new target of reducing emissions to 3.8% below 2005 emissions. The implications of that target of Japan's energy supply can be seen in the graph above. Here are a few points I made about that graph:

The future role of nuclear power in Japan remains uncertain. However, as indicated above, it would not take much for Japan to hit its new emissions targets, which appear to be based on an assumption of minimal nuclear power over the next decade. For reasons well beyond climate policy, I'd take the over on nuclear generation -- Japan just doesn't have better alternatives. 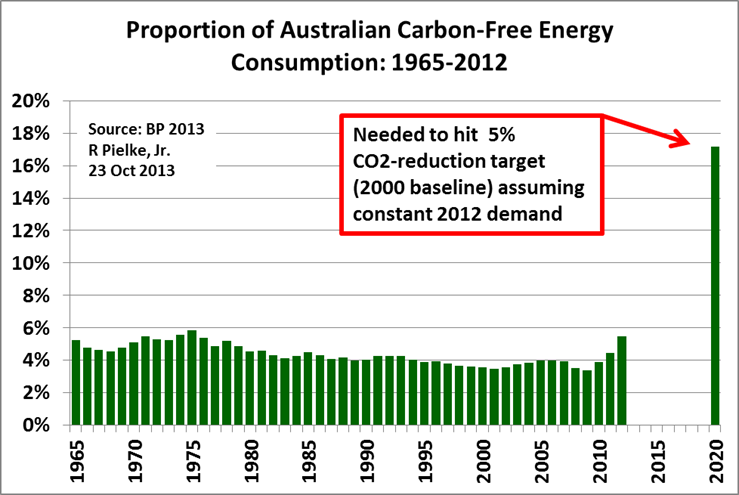 In my 2011 paper on Australia's climate policies (here and here in PDF) I wrote:

Australia has a very carbon intensive economy, thus its ability to dramatically accelerate the decarbonization of its economy offers the promise of many valuable lessons for other countries around the world. However, a focus on targets and timetables for emissions reduction that will be impossible to meet in practical policy implementation runs the risk of engendering public cynicism and even opposition.

Since that paper, Australia has implemented a carbon tax, had a palace coup, seen its most recent two prime ministers (Labor's Rudd, Gillard) leave politics, and had an election in which Tony Abbott and the Conservative-Liberal coalition campaigned on a promise to rescind the carbon tax.

In a recent update to my analysis, illustrated by the graph above, I wrote:

To achieve a reduction in carbon dioxide emissions of 5% from 2000 levels would require a rate of decarbonization of the Australian economy (measured as a reduction in the amount of carbon dioxide emissions per A$1000 of GDP) of greater than 5% per year from 2013 to 2020. This is consistent with my earlier analysis that looked at data through 2006. For comparison, Australia averaged a 2.9% annual rate of decarbonization from 2007 to 2012.

Despite changing political leadership, the Australian government maintains a commitment to a 5% reduction in emissions from 2000 levels. That commitment remains as fanciful as ever.

Here are a few summary points looking at these three cases together: