That news may not come as a surprise to anyone who has seen images of smog-belching smokestacks in Beijing, Delhi, or Mexico. But those factories—or even the clogged roadways of modern cities—are not the biggest culprit. Each year, some 4.3 million people die earlier than they should because of foul air inside their homes, says the WHO. (Its study accounted for fact that people spend time both indoor and outdoors.) 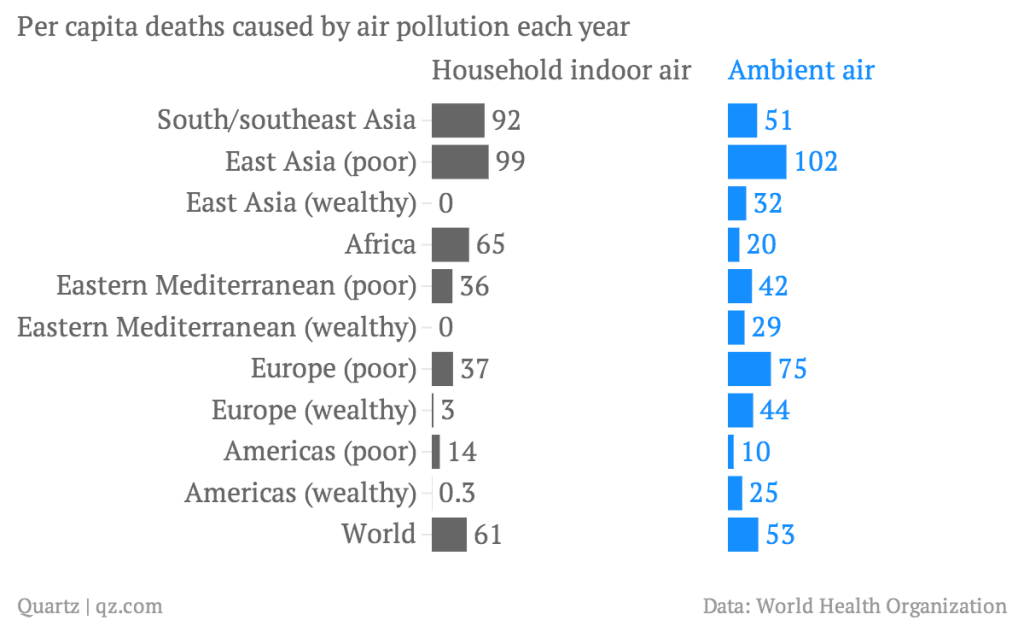 What’s causing the air inside people’s homes to be so poisonous it kills around 11,000 people a day? Stoves. “Having an open fire in your kitchen is like burning 400 cigarettes an hour,” says Kirk Smith, a professor at the University of California at Berkeley, whose research suggests that household air pollution from cooking killed between 3.5 million and 4 million people (pdf, p.186) prematurely in 2010.

Not all stoves cause this kind of devastation. The ones Smith’s talking about are those that the 3 billion people in the developing world use for heat and cooking, which burn solid fuels such as wood, coal, dung, or crop waste instead of gas. The smoke from those fires pumps a harmful fug of fine particles and carbon monoxide into homes. Lousy ventilation then prevents that smoke from escaping, sending fine particle levels soaring 100 times higher than the limits that the WHO considers acceptable.

Breathing this air day in, day out eventually causes a slew of diseases: more than a third of the 4.3 million who die prematurely each year succumb to a stroke, while a quarter die of ischaemic heart disease. And around one-third of annual lung disease deaths worldwide are due to exhaust from coal- or biomass-burning stoves (pdf, p.1).

Exposure tends to be extra-noxious for the people who spend the most time around the fire—usually women and young children. In fact, the WHO reports that household air pollution almost doubles the risk for childhood pneumonia, and attributed more than half the deaths among children less than 5 years old from acute lower respiratory infections to smoke from indoor fires.

Gwynn Guilford is a general reporter and editor for Quartz. She previously blogged at Andrew Sullivan's The Dish, where she covered China and economics, among other topics. This article was originally published at Quartz.