Are Solar Microgrids a Step on the Ladder Towards Grid Access?

In July of this year, Greenpeace installed a solar/battery microgrid in the village of Dharnai in eastern India. The 100-kilowatt system was designed to provide power for the village’s 2,400 residents, 50 businesses, 2 schools, and other infrastructure. Greenpeace called the project “inspiring,” writing that case studies like Dharnai prove “villages can develop their own clean power and contribute to saving their environment by showing we don’t need to use nuclear, coal or other fossil fuels for energy.”

A few months later, the government utility extended the national grid and made the solar microgrid obsolete.

It’s apparently a familiar scenario in India, where extension of the central grid is “scuppering efforts to supply clean, modern energy” according to Bloomberg. “We wanted to set this up as a business model,” Bloomberg quoted Greenpeace campaigner Abhishek Pratap as saying. “Now we’re in a course correction.”

No one should be surprised that the grid has the ability to “crowd out” microgrids and distributed generation. As the Bloomberg piece noted, the government’s grid extension is now “flooding the community with cheap power that undercut the fledgling solar network.” That’s a bit like saying that a new hospital came in and undercut Doctors Without Borders.

Bloomberg criticized the government’s imposition of its “erratic but unbeatably cheap subsidized power,” accusing India’s utilities of “crushing the [microgrid] model before it gets off the ground as they continue a policy of supplying farmers and the poor with cheap power.” The grid may be subsidized, but it’s worth noting that grid power continues to be much cheaper where available than microgrids and distributed generation. From a 2014 IEA report on energy in sub-Saharan Africa: 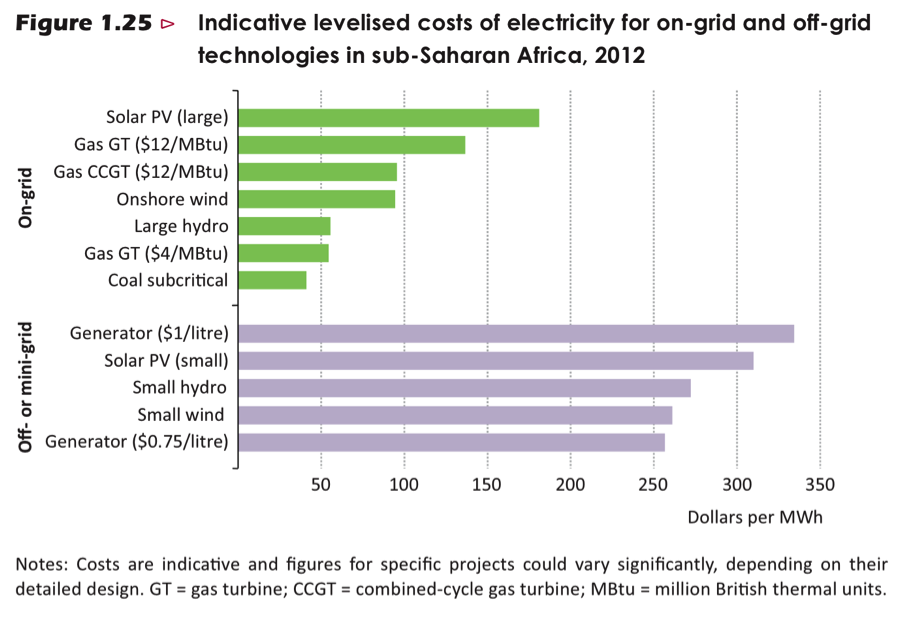 Subsidizing grid extension and provision of electricity access falls squarely into the purview of the state government. And of course, the Greenpeace microgrid was never going to be the last step on Dharnai’s “energy ladder” – the system would be supplying each villager with at most 100 kilowatt-hours annually, split across residential, commercial, and industrial uses. This is far from the global average of 3,000 kWh/yr or the United States’ 13,000 kWh/yr. 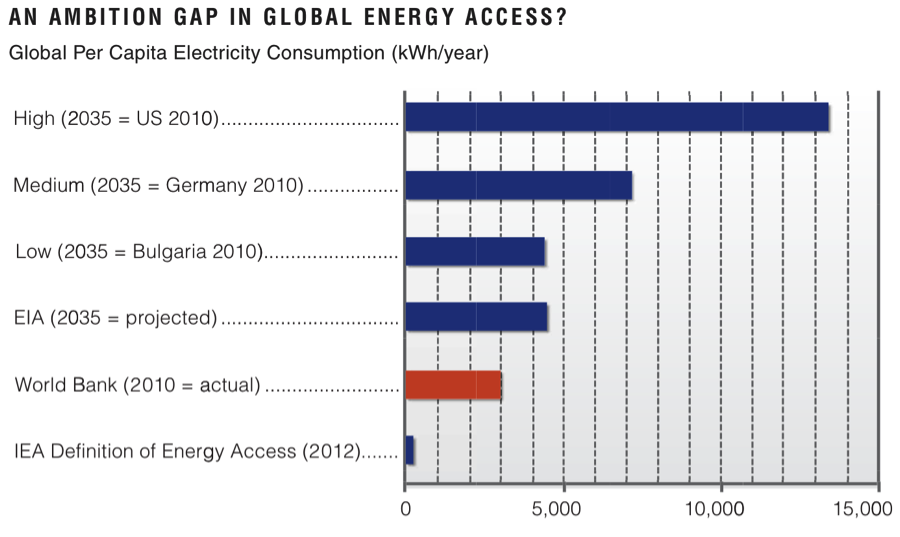 On the other hand, many villages in poor regions like rural India or sub-Saharan Africa are unlikely to be connected to the grid anytime soon. As the Sierra Club’s Justin Guay wrote this summer, the job of DG/microgrids is “to help people get onto the energy ladder today rather than forcing them to wait decades for a grid extension that may never come.”

The question, then, is why did Greenpeace choose to erect “the first village in India where all aspect of life are powered by solar” in a place that clearly was not decades away from grid access?

I spoke with Tufts energy expert and Breakthrough Fellow Kartikeya Singh, who was somewhat dismayed by the government’s actions. “I smell politics,” he told me, noting that the government has been known to extend grid access ahead of elections only to let the reliability of the power system suffer in the long term. “We’re talking 8 to 16 hours of power cuts daily,” according to Singh. “So you may have ‘grid access’ and sure it may be ‘reliable’ (especially around elections), but it will fall back to shortages in the months that follow.”

Singh’s assessment that the grid in India is notoriously unreliable is shared by many experts. Does that mean that off-grid is the alternative?

Joyashree Roy, a professor at Javadpur University in India and a Breakthrough Senior Fellow, told me that solar and microgrids are “not seen as a long-term solution; rather a stopgap solution until enough generation capacity is created” and grids are extended. This is what an energy ladder from DG to full grid access might actually look like, in contrast to Greenpeace’s vision of their solar microgrid being the end of the story. “As of now it can be expected this renewable generation will be connected to the grid and some price negotiation will happen in the foreseeable future,” according to Roy.

The upshot is that while grid access remains highly desirable and provides cheaper electricity than off-grid options, both remain unreliable in India. The concern is whether they can work together to pull Indians up the energy ladder.

“The government has yet to come up with or firm up a policy that will give the market and any private entrepreneurs any indication of what will happen to their investment,” said Singh. A recent paper in the journal Energy concluded that as more people consume more energy, grid connection becomes the lowest-cost option for delivering electricity. And a 2014 World Bank report on electrification insisted that a “two-track” approach, in which centralized and decentralized strategies are harmonized, is essential. The Dharnai case reveals what can happen when institutions – both public and private – fail to coordinate.