Less Than Meets the Eye?

While the recent election has many environmentalists worried that federal action on climate change has hit a dead end, others are finding silver linings in the actions of states and municipalities. Such is the case with this sharp report from Brookings, “Growth, carbon, and Trump: State progress and drift on economic growth and emissions ‘decoupling’” by Mark Muro and Devashree Saha.

Most states, the Brookings report finds, have decoupled emissions from economic growth. That's the good news. But to meet climate targets, that decoupling needs to be sustained, indeed accelerated, for many decades to come. And as we show below, the trends that have driven this emissions progress are not always the trends that lead to deep decarbonization.

Muro and Saha’s analysis looks at economic growth and carbon reduction from 2000-2014 and identifies over 30 states that have experienced absolute decoupling (meaning their economies grew while carbon emissions shrank). However, the authors note that most states haven’t been reducing their carbon intensities fast enough to meet our national emissions reductions target. Figure 1 shows the average annual reduction in carbon intensity of the economy for every state and Washington, D.C. The yellow line is the rate that every state would need to meet for the United States to meet our carbon reduction targets. 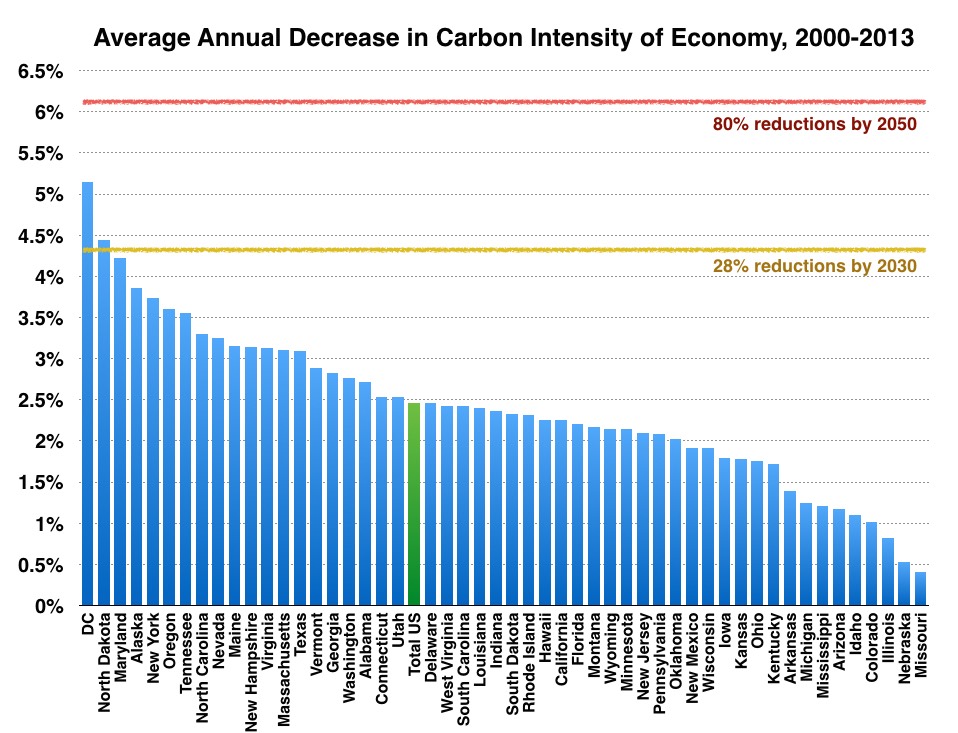 But even this currently-out-of-reach target of 4.3% annual reductions might understate the challenge. It’s based on our Paris commitment to reduce our domestic emissions by 26-28% below 2005 levels by 2030. But the nominal, if not statutory, goal of international climate negotiations is for developed countries to reduce their emissions by 80% by 2050. If the United States were to meet that aggressive decarbonization goal, every state would need to reduce their carbon intensities by 6.1% every year through 2050, as indicated by the red line in Figure 1.

That’s tough. But it gets tougher.

As Figure 2 shows, when we look at these two drivers separately, the majority of reductions in the carbon intensity of the economy come from reductions in energy intensity (the average is about 65% of decarbonization comes from reduction in energy intensity), with a few notable exceptions. Most states did reduce the carbon intensity of their energy systems, which is good, but they mostly did this by switching from coal to gas in the power sector, as we’ve shown before in regional grid analysis. 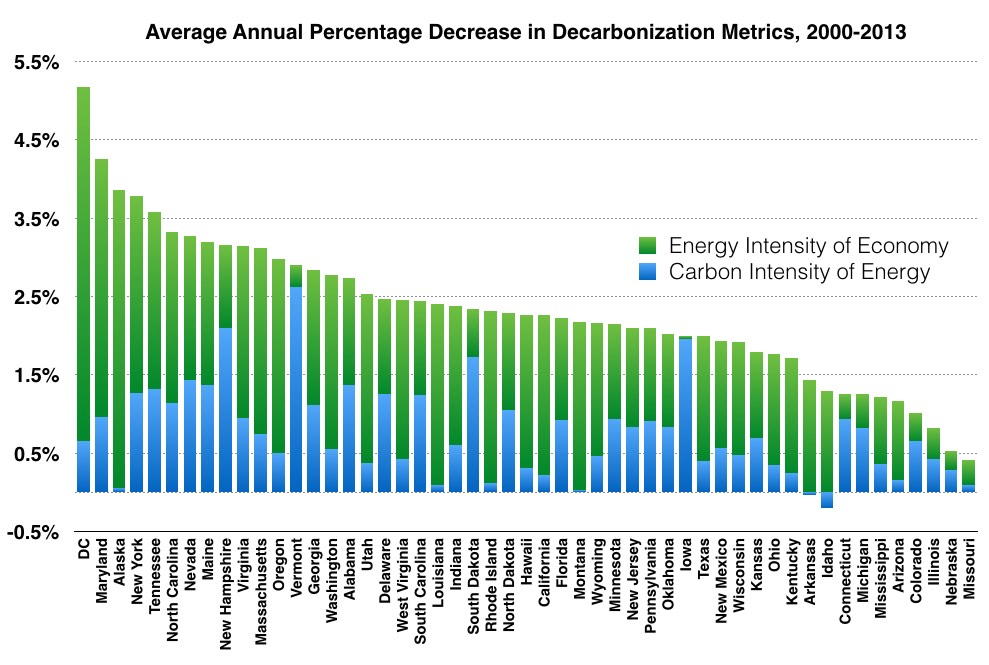 We would need a detailed structural decomposition analysis to really tease apart the drivers of either carbon intensity or energy intensity. But it’s easy to see that most states aren’t doing enough to reduce the carbon intensity of their energy (for example: by building more low-carbon energy and closing down coal plants). The notable exceptions are Vermont (due to a 22% increase in nuclear and an equal decrease in natural gas), Iowa (due to massive wind build-out and slight decrease in coal), South Dakota (wind), and New Hampshire (coal-to-gas). Two states, Idaho and Arkansas, actually increased their carbon intensity of energy, due to declines in hydro and nuclear.

For an ambitious target for 2050, let’s assume that both drivers contribute evenly: half the reductions in carbon intensity of the economy come from reductions in energy intensity and half come from reductions in the carbon intensity of energy. In Figure 3 we can see how the states stack up against this target for carbon intensity--still a long way to go. Note that California, which has some of the most aggressive clean energy deployment targets, has one of the lowest rates of decarbonization. This is primarily because California had very little coal to start with, is already ~70% natural gas for the power sector, and closed half of its existing nuclear power in 2013. And, sadly, Vermont’s rapid decarbonization was actually due to a large increase in nuclear power from 2000-2013, but they have since closed their sole nuclear power plant and are expecting to replace it with natural gas, which will lead to re-carbonization. 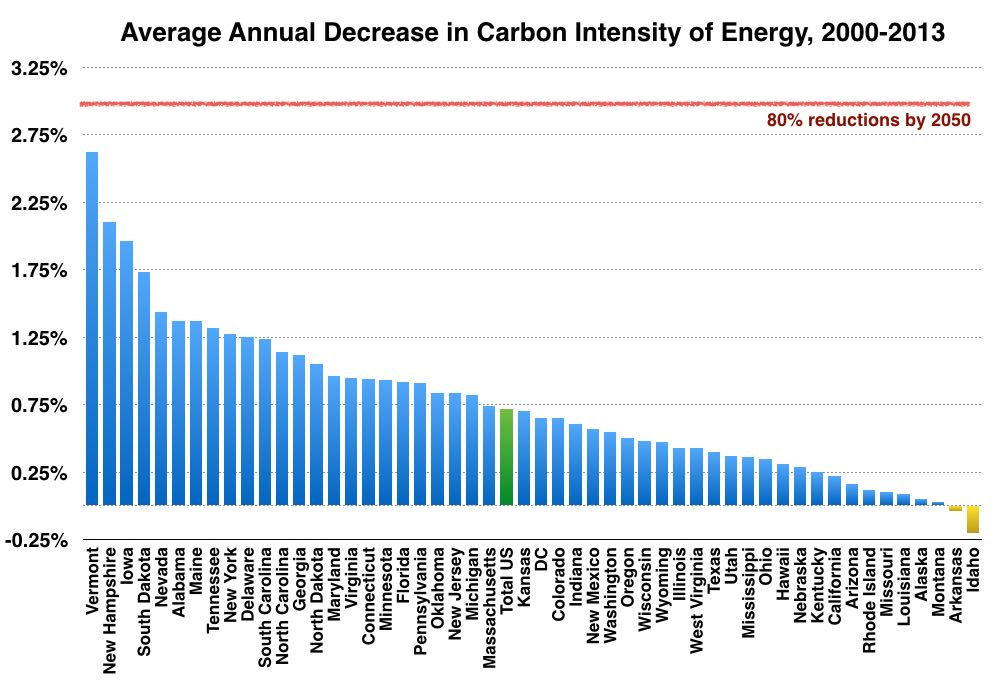 Most of the decline in the carbon intensity of energy comes from the ongoing coal-to-gas shift mentioned above. Note that two states associated with large growth in renewable energy, California and Texas, are decarbonizing slower than average. Both states already had large shares of natural gas, 60% and 47% respectively, so they didn’t gain as much from coal-to-gas shift as many other states did. More importantly both states saw large decline in low-carbon energy: both Texas and California saw hydro decline by 5-6% annually over 2000-2014. California also saw a significant one-year drop in nuclear generation when the San Onofre plant shut down in 2012.

What About Energy Intensity?

Often people see declines in energy intensity and think “energy efficiency”, which is a part of it, but most of the decline actually comes from structural change in the economy, i.e. generating more GDP from sectors that use a lot less energy. Think about how much energy it takes to manufacture a car versus package a financial service. The Brookings’ report acknowledges this fact:

Almost all of the states that experienced the largest shift toward services industries also registered large declines in their carbon emissions during 2000–2014. For example, as Maine’s service sector’s share of real GDP (in millions of chained 2009 dollars) expanded from 75 percent in 2000 to 83 percent in 2014, its carbon emissions declined by 25 percent. Similarly, Delaware, Georgia, North Carolina, and Virginia all experienced some of the largest relative expansions of their service sectors among states and likewise achieved substantial carbon emissions declines of 20 percent, 17 percent, 15 percent, and 15 percent, respectively.

But a more important issue when looking at sub-national trends is how energy intensive industries shift within a country. California’s energy intensity may go down as they drill less oil, but they’re still consuming that oil, which now might be coming from North Dakota. The Energy Information Administration has a useful data set that gets at this issue, illustrated in Figure 4. To summarize, the 10 states with the lowest per capita emissions all tend to be net importers of electricity, while the 10 states with the highest per capita emissions tend to be net exporters of electricity. This means that there are some emissions laundering going on, where states look cleaner because their dirty power is actually generated out-of-state. Better accounting could help (this is also an issue for cross-country emissions comparisons), but it doesn’t change the imperative: we need to find cheaper ways to produce clean energy, otherwise we’re just moving our energy-intensive industries to states (or countries) with less concern for climate change and environmental pollution. 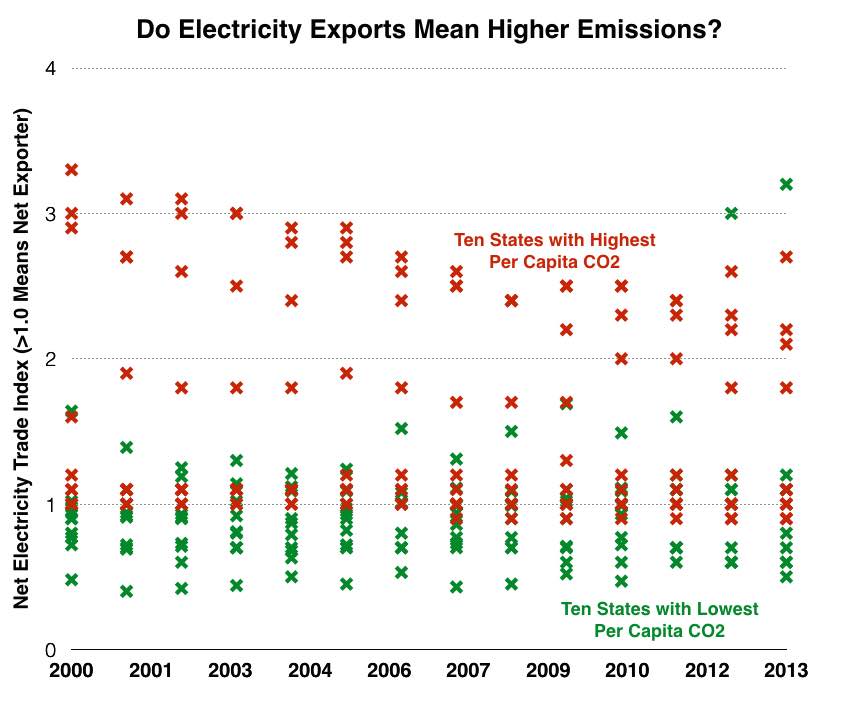