Methane Leakage from Cows Higher than from Natural Gas Development

Since the onset of the shale gas revolution, many have worried that emissions of fugitive methane — the main component of natural gas and a greenhouse gas more potent than carbon dioxide on a molecule-for-molecule basis — are eroding the climate benefits of switching from coal to natural gas. Some have gone so far as to claim that natural gas is worse than coal because of excess methane emissions. But according recent measurements from the Environmental Protection Agency, total methane emissions have been going down, most rapidly in the natural gas system.

Cornell University’s Robert Howarth claimed that his observed leakage rates of 3.6-7.9 percent of total gas production eliminated gas’s climate benefit over coal, suggesting that these leakage rates were almost entirely caused by unconventional hydraulic fracturing. Two recent studies by the National Oceanic and Atmospheric Administration used several hours’ worth of data over fields in Colorado and Utah to suggest system-wide leakage rates of, respectively, up to 7.7 percent and 6.2 to 11.9 percent. Howarth’s colleague Anthony Ingraffea wrote in the New York Times last year that “gas lacks any climate advantage over coal.” Climate pundit Joe Romm at the Center for American Progress has repeatedly referred to natural gas as a “gangplank,” not a bridge fuel.

But other experts charge the above studies and claims with conflating total methane emissions with emissions associated with fracking; extrapolating results from limited samples of top-down observations; and misrepresenting the implications of the different global warming potentials of coal versus gas. Measurements from the EPA, the Environmental Defense Fund, and elsewhere refute claims that methane leakage is on the rise and that fugitive emissions from the natural gas sector are driving this increase.

Fugitive emissions of methane continued their decline last year, according to the latest draft Greenhouse Gas Emissions Inventory released annually by the EPA. Methane leakage from the natural gas system in particular has plummeted, dropping 40.4 percent between 2006 and 2012. Thanks to this progress, natural gas systems are no longer the largest emitter of methane, a position now held by enteric fermentation (methane from cattle and other livestock). 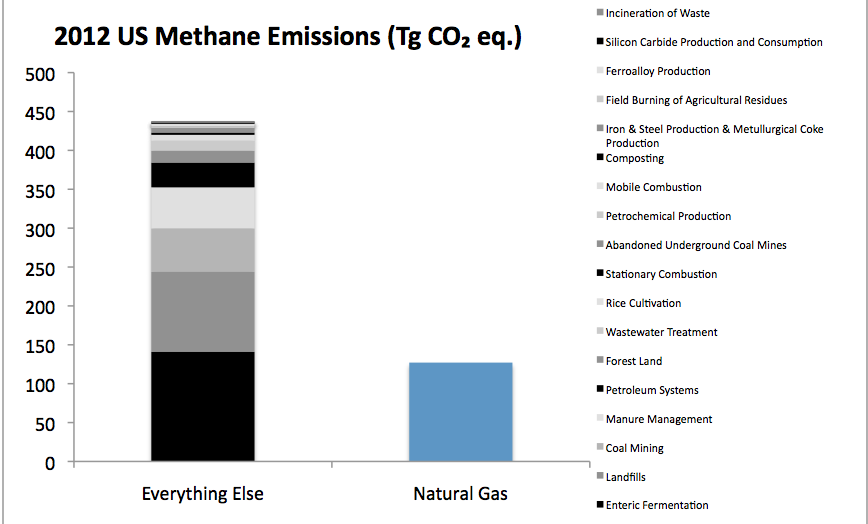 Though EPA notes that the initial expansion of hydraulic fracturing operations drove natural gas system emissions up to record levels, this trend peaked in 2006. Absolute emissions from the natural gas system in 2012 were also 16.9 percent lower than 1990 levels, while total natural gas production increased by 40 percent over the same period. EPA credits the drop to “an increase in plunger lift use for liquids unloading, increased voluntary reductions over that time period (including those associated with pneumatic devices), and RECs use for well completions and workovers with hydraulic fracturing.” 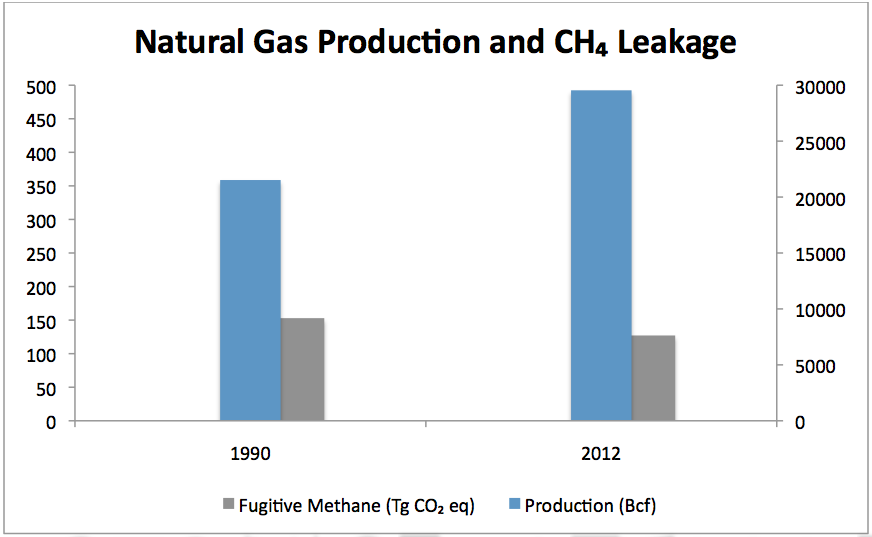 The EPA Inventory pegs fugitive methane at about 1.5 percent of total natural gas production. Last month, a study led by researchers at Stanford University and the Environmental Defense Fund (EDF) found that EPA could be underestimating total methane leakage by 25 to 75 percent. However, the Stanford researchers did not identify natural gas as the main source of excess emissions, estimating that fracking is responsible for only about 7 percent of the extra methane. Indeed, a previous EDF study found that methane emissions from natural gas production are significantly lower than suggested by Howarth, Ingraffea, and others. While total methane emissions are higher than previously thought, there remains no verified evidence that system-wide fugitive emissions of natural gas greatly exceed 1.5 percent of total production, leaving other sectors — such as waste, agriculture, and livestock — as the main sources of extra emissions. 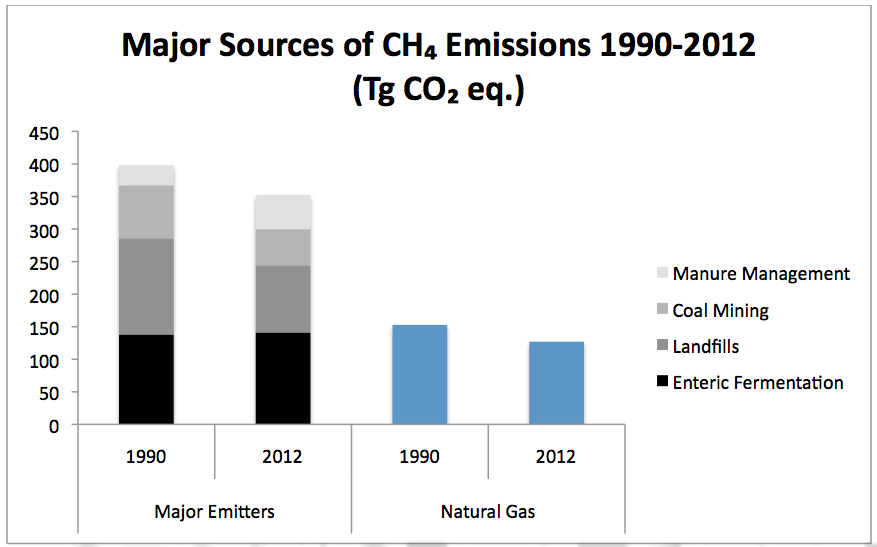 The same Stanford study concludes that natural gas offers “robust climate benefits” over coal. While some researchers have stated that a leakage rate above 2.5 percent (higher than the rates estimated by both EPA and the studies reviewed by Stanford) fully erodes the climate benefit of gas over coal, experts say that there is little justification to support these claims. The disagreement stems from a sharp analytical difference in the use of greenhouse gas’s “global warming potential” (GWP) in climate modeling. Comparisons of lifecycle greenhouse gas emissions between coal and natural gas must take into account factors like atmospheric residence time and concentration, according to climate scientists like Raymond Pierrehumbert of the University of Chicago and Louis Derry of Cornell University. The less sophisticated use of GWPs, by contrast, simply compares the two gases on a molecule-by-molecule basis. As Michael Levi of the Council on Foreign Relations has written, “leakage in the neighborhood of 5 percent is a bad thing, even if it doesn’t come close to making gas worse for climate change than coal.”

Many analysts and pundits continue to suggest that methane leakage from the natural gas sector is on the rise, but these claims are increasingly contradicted by observations from the EPA, the EDF, the Department of Energy, and leading research universities like MIT, the University of Texas, and Stanford. A growing number of studies point to low and falling methane leakage from the gas sector, while discarding the “seriously flawed” use of GWPs by Professors Howarth and Ingraffea (and others) to compare coal and gas.

Alex Trembath is a policy analyst in the Energy and Climate Program at Breakthrough.