Methane Leakage Not a Deal Breaker for Natural Gas

A Response to Anthony R. Ingraffea

In an op-ed published in the Sunday edition of the New York Times, engineering professor Anthony Ingraffea argued that natural gas should not be part of any strategy to confront climate change. “I can assure you that this gas is not ‘clean,'” Ingraffea argued, “because of leaks in methane, the main component of natural gas, the gas extracted from shale deposits is not a ‘bridge’ to a renewable energy future.” To make his case, Ingraffea cited two studies estimating methane leakage rates from shale gas production: one study by the National Oceanic and Atmospheric Administration (NOAA), and the other study by Ingraffea and colleagues at Cornell University.

As Ingraffea pointed out, while natural gas emits about half as much carbon dioxide as coal per unit of energy, the global warming impact of methane is about 20 times more potent than coal on a 100-year basis. As a result, methane emissions have the potential to erode most or all of the CO2 emissions benefit resulting from coal-to-gas switching. According to a study from the National Center for Atmospheric Research, if methane leakage exceeds 2 percent of total production, the greenhouse gas footprint of shale gas could exceed that of coal (scientists at the Environmental Defense Fund estimated that this threshold is actually 3.2 percent, and Lawrence Cathles of Cornell University has suggested that it could be as high as 18 percent).

But the best available studies suggest that leakage rates do not exceed 2 percent. Ingraffea ignored the latest data from the US Environmental Protection Agency, which estimated nationwide fugitive methane emissions at 1.5 percent of natural gas production and indicated that leaks have been on the decline in recent years. A 2012 study published by the Joint Institute for Strategic Energy Analysis estimated leakage at 1.3 percent. Our review of estimates of fugitive methane emissions from shale gas production range from 1 percent to 7 percent, with most recent estimates in the 1–to–2 percent range (see graph below). The two leakage studies cited by Ingraffea, which both estimated leakage rates well above 2 percent, are outliers and have been faulted for selective bias and poor measurement and statistical techniques. 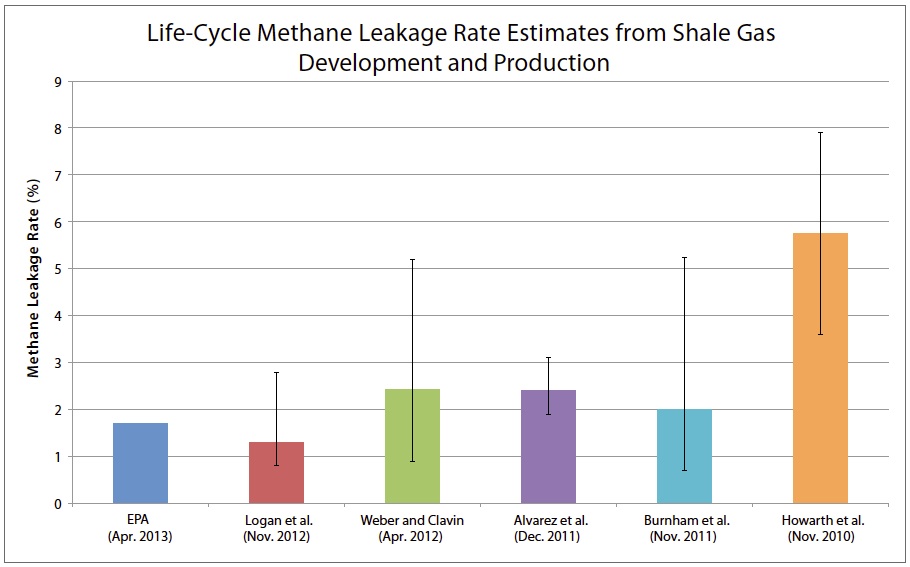 Methane leakage rates can and probably will be lowered substantially in the future. One study found that 70 percent of total leakage from 250 wells in Fort Worth, Texas, was occurring at only 10 percent of the wells, suggesting significant potential for low-cost, high-impact intervention. And a recent report from the World Resources Institute identified several promising options for further limiting fugitive methane emissions.

Moreover, even if methane leakage were to remain modest in some areas, long-term climate models have suggested that warming trends have less to do with the rate of methane leakage and more to do with other variables, such as the thermal efficiency of future coal plants and whether the switch to gas is permanent or a bridge to zero-carbon energy. Thus, although fugitive methane emissions reduce the short-term emissions benefit of coal-to-gas switching ­– and should be addressed for that reason – they do not limit natural gas’s potential as a bridge fuel to a low carbon future.

Not since European deployment of nuclear power in the 1970s and 1980s has any country achieved such rapid decarbonization as the United States has in the last five years thanks to cheap natural gas. Natural gas has displaced more coal than any other energy source in decades, and will prove an essential transition fuel as governments continue to support innovation in renewables, nuclear, and carbon capture technologies.