This week the International Energy Agency updated their technology roadmaps for solar photovoltaics (PV) and solar thermal energy (STE). The bottom line is that significant policy and technological progress are required for solar to play a major role in electricity in the future. With that progress, IEA finds, solar PV could provide as much as 16 percent of global electricity by 2050, with STE providing another 11 percent –– making solar’s collective 27 percent the largest single contributor to global electricity in this IEA scenario.

But that’s not the bottom line that many commentators drew: 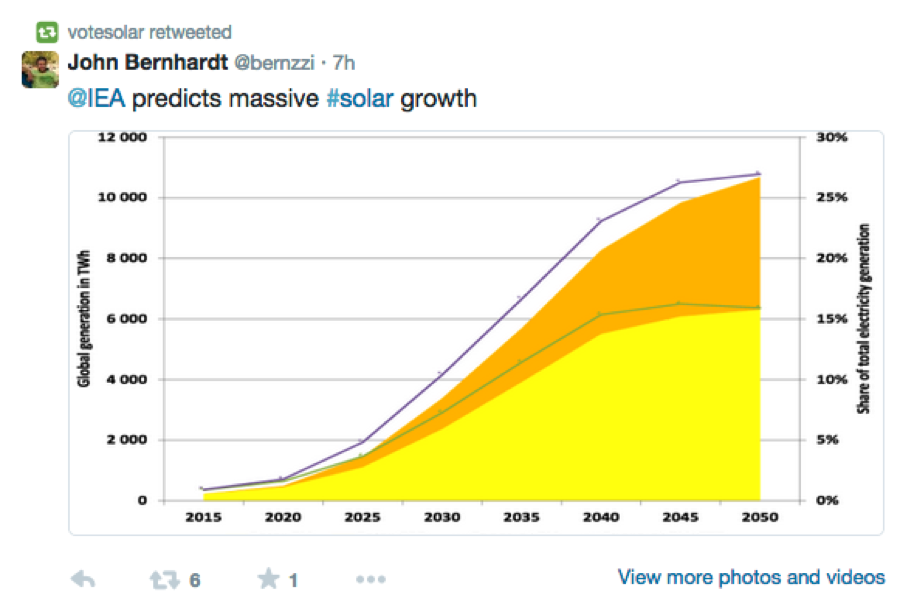 First things first: the IEA “Technology Roadmap” is just that: a roadmap. It is not a prediction. It is not a projection. It is, as the IEA describes, “the expected technology improvement targets and policy actions required to achieve [this] vision by 2050.” To be fair, most observers at least briefly acknowledged this, noting as Grist’s David Roberts did that “with the right policies in place, solar could be the largest provider of global electricity by 2050” (emphasis in original).

So what are those necessary policies and technology targets?

Start with climate policy. The IEA report states, “The vision in this roadmap is consistent with global CO2 prices of USD 46/tCO2 in 2020, USD 115/tCO2 in 2030, and USD 152/tCO2 in 2040.” Currently, there is no global carbon price. National and regional carbon prices consistently measure well below these levels. California’s carbon price is around $12/tCO2. Europe’s is around $9/tCO2. China’s municipal carbon pricing pilot schemes vary between $3 and 13/tCO2. This summer Australia repealed its national carbon tax. As MIT’s Jesse Jenkins has noted, there are convincing political economy reasons to suspect that nations will find it hard to raise carbon prices well above these current levels.

So the climate policy assumptions in the roadmap are a stretch, to say the least. In contrast, the technology targets in the reports are simultaneously a terrific set of recommendations to improve PV’s fortunes and a signal of the significant remaining obstacles to solar’s growth.

As the report notes, average annual solar PV deployment needs to quadruple from current levels to reach the scenario’s capacity targets –– from 36 GW installed in 2013 to 124 GW/yr, peaking at 200 GW/yr between 2025 and 2040. At that point, the IEA expects that solar PV deployment would stabilize and STE would take over, noting that “when reaching shares between 5 percent and 15 percent of annual electricity generation, PV starts to lose value in wholesale markets.” 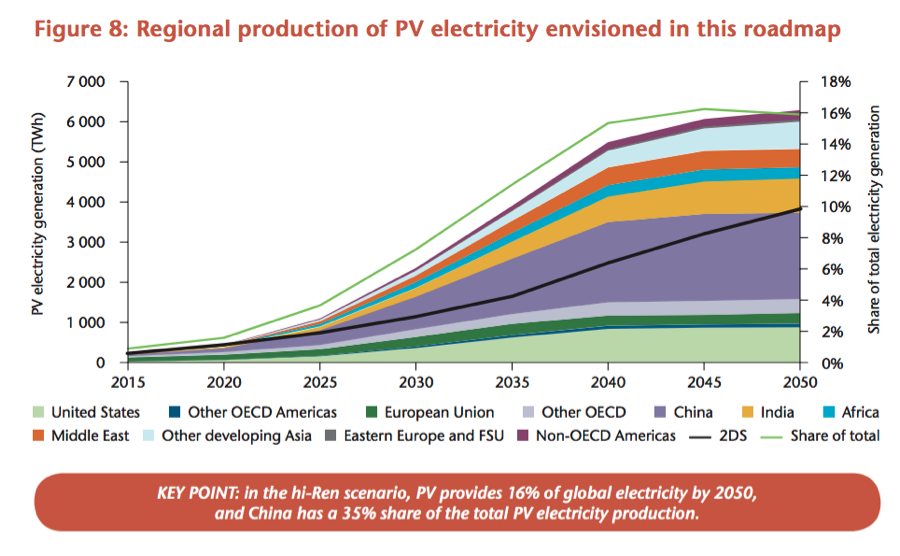 The report includes considerable discussion of the technological, policy, and business model innovations required to accelerate deployment while overcoming major technical and integration hurdles. Among the technical recommendations, IEA emphasizes that cell wafer size, performance ratios, degradation rates, silicon consumption, and cell efficiency all need to improve to reduce the capital costs of solar PV. Increasing quantities and quality of storage are required as PV deployment increases, with voltage control and added pumped-hydro storage adequate in the medium term and “new storage capabilities” required in the 2030 to 2050 period.

The report dwells on the need to maintain deployment incentives, especially for distributed rooftop PV. While lauding subsidies like feed-in tariffs (FITs) and net energy metering (NEM), the authors acknowledge that these subsidy programs are largely unsustainable in their current forms. “NEM, effective for jump-starting local PV markets,” the authors note, “raises concerns when large penetration levels are reached.” The report recommends “[facilitating] distributed PV generation while ensuring T&D grid cost recovery,” but notes also that it is “not straightforward to determine what is acceptable and what is not” in balancing these two imperatives.

Finally, the report emphasizes that the world is not on track to achieve all these technology and policy targets. The roadmap is “based on the hi-Ren Scenario” of IEA Energy Technology Perspectives 2014, in which renewables reach 79 percent, and solar 27 percent, of global electricity generation in 2050. This compares to IEA’s business-as-usual “6DS” scenario (AKA the path we’re currently following), in which all renewables provide 27 percent, and solar around 5 percent, of global electricity in 2050. 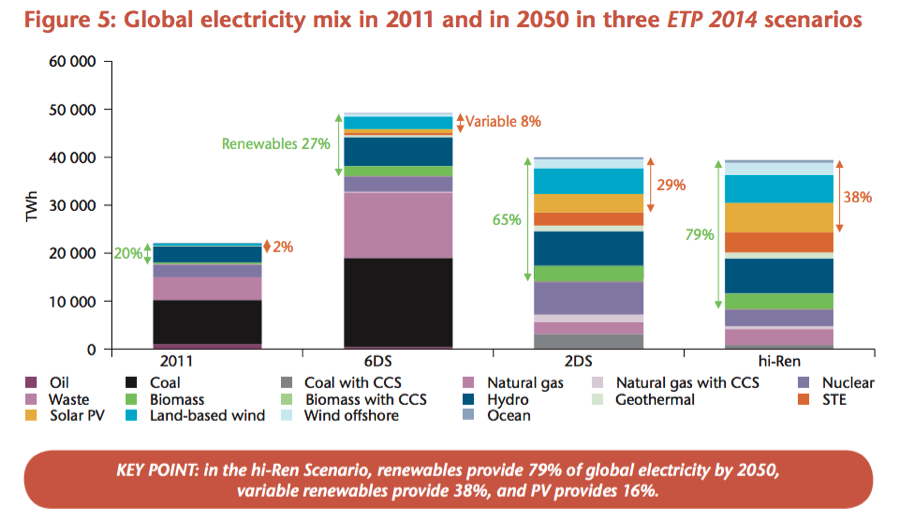 IEA’s baseline assumptions may be too pessimistic or their roadmaps too optimistic. Either way, the policy and innovation recommendations of the solar roadmaps are welcome, and a reminder of the significant progress still required for solar technologies. And, in perhaps the most important point made in the roadmap reports, the IEA’s executive director Maria van der Hoeven emphasizes that “energy efficiency, many types of renewable energy, carbon capture and storage (CCS), nuclear power, and new transport technologies will all require widespread deployment” to meet future climate and energy goals.