Nuclear Has One of the Smallest Footprints

From Fuels to Building Materials, the Atom is Antidote to Sprawl

When evaluating the footprint of nuclear, writers and analysts tend to focus on its near-zero carbon emissions. Yet, there are many other areas where nuclear power consumes fewer resources than other electricity-generating technologies. In fact, when compared to coal, natural gas, and renewables, nuclear is the most land efficient, energy-dense source of power, with the lowest use of building materials per unit of energy generated per year, and one of the least expensive in terms of levelized costs. Evaluating these different aspects of its footprint demonstrates that nuclear is one of our most viable solutions to readily decarbonize the economy.

Advocates of a particular generating technology will often use land use as an argument against competing technologies. With some technologies, like wind, there is the risk of apples-and-oranges comparisons in terms of land use. Do you count the whole area of the wind farm in the calculation or just the footprint of the wind turbine plus access roads? The difference between the two can be a factor of 50.

To avoid apple and orange mix-ups, the table below identifies land use per GWh per year to ensure a like comparison between the technologies. From this comparison, nuclear is one of the most land-efficient sources of energy. Furthermore, in the United States, the average nuclear plant uses 450 m2 per GWh per year. This is less than half the Massachusetts Institute of Technology (MIT) estimate shown below. Although this data doesn’t account for uranium mining, we will see later that it is not significant per GWh when you look at its fuel footprint.

From a land perspective, biomass is an extensive challenge except for countries with plenty of spare arable land. Solar thermal is often criticized for requiring vast tracks of land, but it’s still more land efficient than surface strip coal mining, according to MIT. Hydro is a special case because the land use depends on the head height, the average reservoir depth, and the flow rate through the reservoir; the table above uses typical numbers.

Nuclear power is often criticized as a huge consumer of building materials. This is true if you just look at the materials used to build a power station without considering the amount of energy the power station generates over its life. As such, building materials are often quoted in tonnes per MW (power plant size) rather than tonnes per MWh (the power plant’s energy generation). This can mislead us into thinking that nuclear power uses more resources than solar panels, when the opposite is true.

The table below shows the concrete and steel used in some plant constructions expressed as tonnes per GWh per year. The capacity factors shown are the ones used in the referenced reports. Of these plants, nuclear power uses the least amount of concrete and steel per unit of energy generated in one year. If the full lifetime of the plants had been considered, then the nuclear plant’s use of concrete and steel would be even less because nuclear plants have some of the longest lifespans. Compared to a nuclear plant’s lifespan of 40 years, for instance, a solar panel may last less than 20 years. A true comparison could significantly increase the materials required for the solar plant.

From ISA except for solar thermal, which is from NEEDS

Opposition to nuclear in part stems from a fear of radiation exposure. UNSCEAR demonstrated that steel production exposes the general population to more radiation than nuclear power plants. Installing solar thermal and wind in preference to nuclear power, and so using significantly more steel, may well be increasing the radiation risk, not reducing it.

Wind and solar advocates often suggest using gas or biomass to balance the variability of the wind or solar plants rather than using uranium or coal. Both gas and dry wood have very low energy densities compared to uranium or coal and need larger volumes of fuel. The reason that natural resources like coal and uranium have been so successful at generating electricity is largely because of their relatively high energy densities – particularly uranium. Using uranium in fast reactors rather than LWRs would lower the fuel footprint even further by more than 100 times.

On average, about 500 kilograms (kg) of carbon dioxideequivalent are produced per MWh of electricity generated in the world. This is known as the ‘emission intensity.’ To reach the emissions reductions needed by 2050, studies have shown that the average emission intensity needs to be reduced to as low as 50 kg CO2-e/MWh.

The emission intensity of various primary energy sources is seen in the table below. This data shows life cycle emissions, which means that they cover emissions during power plant construction, fuel mining and transport, operation, decommissioning, and waste disposal. Only the really low emitters, nuclear and renewable energy options, can deliver the 2050 emissions intensity target. The worst offenders are coal and oil, followed by gas. Carbon capture and storage (CCS) will help both coal and gas to reduce carbon dioxide emissions, but will still be unable to meet the challenge of 50 kg CO2-e/MWh target. 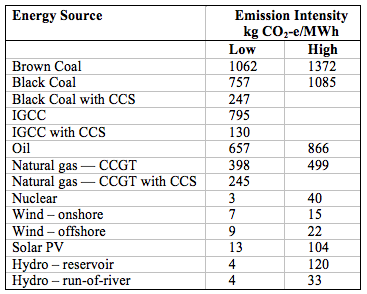 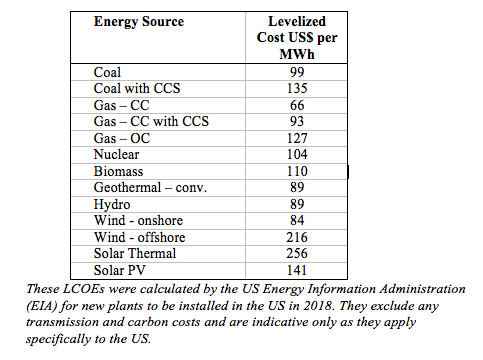 In the end, nuclear power has one of the smallest footprints of any energy source: it uses less land, significantly less concrete and steel, and generates less expensive electricity than solar and wind alternatives. If we want to protect our environment and reduce our impact on Earth, we must consider nuclear as part of the energy mix.

Martin Nicholson is an Australia-based engineer and author who wrote the peer-reviewed book on low-carbon energy systems titled The Power Makers’ Challenge: And The Need for Fission Energy (Springer UK).