Nuclear Is Cheaper Than Solar Thermal

I’m a big fan of TIME reporter Mike Grunwald and often think that he and Breakthrough are among the only people who really understand that Obama’s signature climate policies are not fuel economy standards or power plant regulations, but the tens of billions invested in clean energy technology and innovation.

But as much as I admire his commitment to innovation and clean technology, I have to disagree with him on the economics and technological challenges associated with renewable energy. Last week, Grunwald wrote a long celebration of the coming solar revolution in TIME, featuring a new solar plant with integrated energy storage while shrugging off new nuclear power for its “exorbitant costs.”

The plant in question is Crescent Dunes in Nevada, a first-of-kind solar thermal facility with molten salt storage that will allow the plant to generate power even after the sun has gone down. The project is the recipient of a $737 million loan guarantee from the Department of Energy and exemplifies what Grunwald calls “a new gold rush, launched after President Obama’s election.”

But if next-generation power technologies that promise lower costs are so exciting, it’s a wonder that Grunwald highlights Crescent Dunes while panning nuclear. The Vogtle nuclear plants coming online near Atlanta generate a kilowatt of power at half the cost of Crescent Dunes. They will also generate roughly 30 times as much power annually.

Crescent Dunes is a 110-megawatt power plant with total reported capital costs of $910 million, according to its website. That’s $8,200 per kilowatt. The Vogtle reactors — also DOE loan guarantee recipients — are a combined 2,234 megawatts at a reported cost of about $14 billion, or $6,700 per kilowatt.

The Vogtle reactors will generate full power roughly 90 percent of the time. Even with the ability to store power once the sun has gone down, Crescent Dunes will only generate power about 50 percent of the time. After you adjust for capacity factor, or the actual production of a power plant as a proportion of nameplate capacity, Vogtle’s cost advantage is enormous. 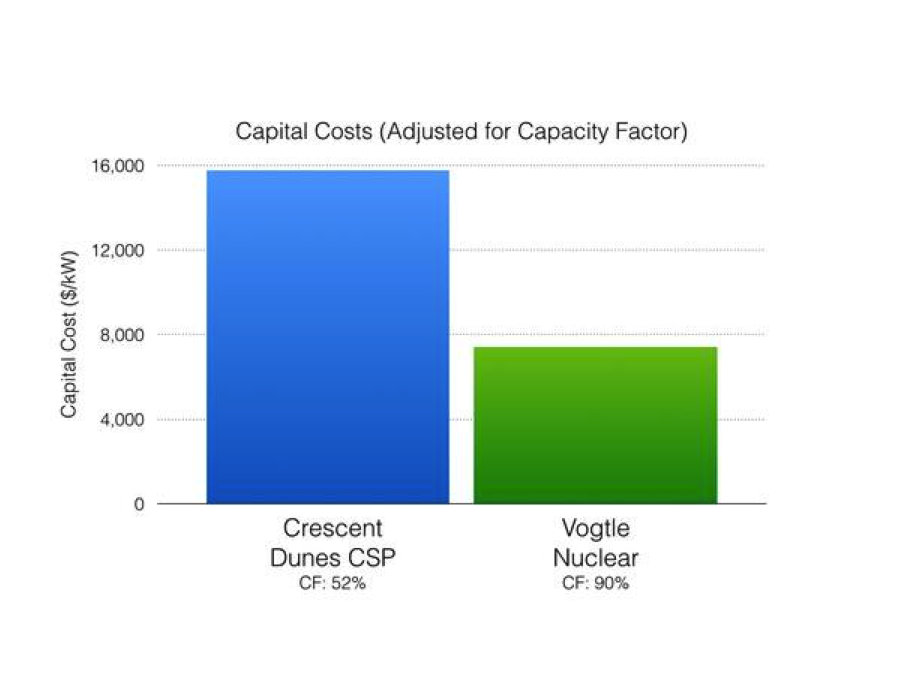 We shared this graph with Mike on Twitter, and he responded thusly:

Grunwald defended his dismissal of Vogtle by arguing that Crescent Dunes is a first-of-kind plant featuring energy storage, while nuclear is an old technology. But so is solar thermal, which dates to the 18th century. The first solar thermal plant with built-in energy storage was built in 1904.

What Grunwald really means is that the particular molten salt storage technology used by the Crescent Dunes plant is first-of-kind. Then again, so are many features of the Vogtle plants. Vogtle’s are the first AP1000 reactors being built in the United States and among the first to begin construction anywhere in the world. They boost passive cooling systems and key modular components. Plants like these will be less encumbered with expensive redundant safety systems and will benefit from economies of manufacturing scale. (For more information, see Breakthrough’s report How to Make Nuclear Cheap.)

If Vogtle is completed on time and under budget, as it is on track to do, we will see if other utilities take the plunge on the AP1000. With future demand growth uncertain, many utilities may not be willing to make 1 to 2 gigawatt bets on energy demand far into the future. But it is notable that there are 8 licenses pending for new AP1000s, with many utilities waiting on the sidelines to see how Southern Company, the utility building Vogtle, fares.

By contrast, there are zero solar thermal with energy storage projects planned or under construction in the United States outside of Crescent Dunes. Even among ardent renewables advocates, solar thermal is widely considered to be a challenged technology, as photovoltaic panels are now cheaper in many contexts.

Grunwald writes, “The more renewables are deployed, the cheaper they’re becoming to deploy” thanks to economies of scale, learning curves, etc. This is undoubtedly true for solar panels and wind turbines, but renewables continue to suffer from intermittency and energy density challenges that actually push system costs up over time as penetrations increase.

And though Grunwald anticipates “dramatic reductions in ‘soft costs’ like permitting, marketing and installation,” those are unlikely to come without long-term, sustained subsidies to scale the industry up. Unlike price declines in solar manufacturing, economies of scale for solar soft costs, as we pointed out a year ago, don't spill over from one economy to another. Germany's $100 billion in solar subsidies over the last decade have helped drive down the cost of modules for everyone. But Germany's solar installation costs have offered little benefit here. To achieve similar reductions in the installed cost of solar panels will likely require a similar scale of subsidies in the United States.