Steeling Ourselves for More Coal

There is no material more fundamental to industrial civilization than steel. Modern buildings, ships, cars, planes and bridges would all be unthinkable without steel, and as pointed out by Allwood and Cullen in their fine recent book on materials production we currently have no viable substitute materials that could perform steel's multiple functions. We are still very much living in the iron age.

Global production of steel has now reached almost 1.5 billion tonnes each year. The geographic make up of steel production however has changed profoundly in the last decade. In the year 2000, China produced 15% of the world's steel. Today almost half of the world's steel is made in China, with Chinese steel production increasing by over 500% since 2000. The astonishing levels of steel consumption in China is illustrated by the fact that 60% of rebar, used in buildings to reinforce concrete, that is produced each year is now consumed in China. 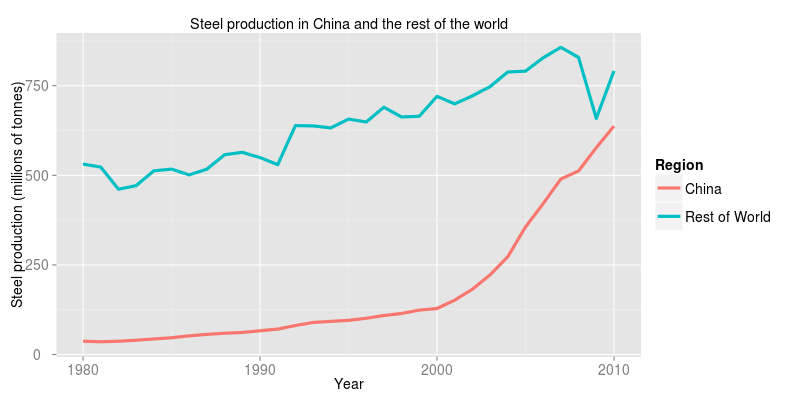 Globally about 1 billion tonnes of coal is used to produce steel, representing 14% of total coal production, with steel and iron production equating to over 6% of global carbon dioxide emissions. This figure is much higher than that of the aviation industry, yet have you ever read an op-ed calling steel manufacturing a rogue industry?

The vast disparities in steel consumption in the world today suggest that a significant increase in overall steel consumption is inevitable and probably desirable. We are however reaching the limits of how efficiently steel can be produced, and despite multiple opportunities to improve the rationality of steel use, it appears clear that we will need to mine hundreds of millions of tonnes of coal each year to produce steel for decades, and more likely, generations to come. These realities should be borne in mind by those who claim there are no significant barriers to 100% renewable energy.

Robert Wilson is a PhD student in mathematical ecology at the University of Strathclyde. This post originally appeared on his Energy Collective blog The Energy Transition.