How Do the Costs of Solar and Natural Gas Stack Up?

In September, Lazard – an international financial and management consultancy – released its updated estimates for the levelized cost of different electricity generation technologies (LCOE). Observers were excited, principally because Lazard show wind and solar photovoltaic costs surprisingly competitive with natural gas. According to Lazard, utility-scale solar has an LCOE range of $72 to $86 per megawatt-hour (MWh), rooftop solar’s (residential, commercial, and industrial) is $126 to $265/MWh, wind’s is $37 to $81/MWh, and natural gas’s is $61 to $87/MWh.

Lazard’s estimates for unsubsidized wind appear to agree with other leading estimates for subsidized wind, such as Lawrence Berkeley National Laboratory’s analyses. Regardless of subsidy, wind’s LCOE is certainly competitive with gas and has been for years now. Of course, historic low prices for wind projects haven’t ended the technology’s famed subsidy dependence. While power purchase prices for wind have declined considerably since 2009, deployment in 2013 totaled only 1,032 megawatts (MW) – down from 12,885 MW in 2012 before the federal Production Tax Credit expired.

But Lazard’s extremely narrow and low range for solar PV is surprising. Since Lazard’s public documents offer very little information on their sources, it’s important to compare their estimates against other leading analyses. 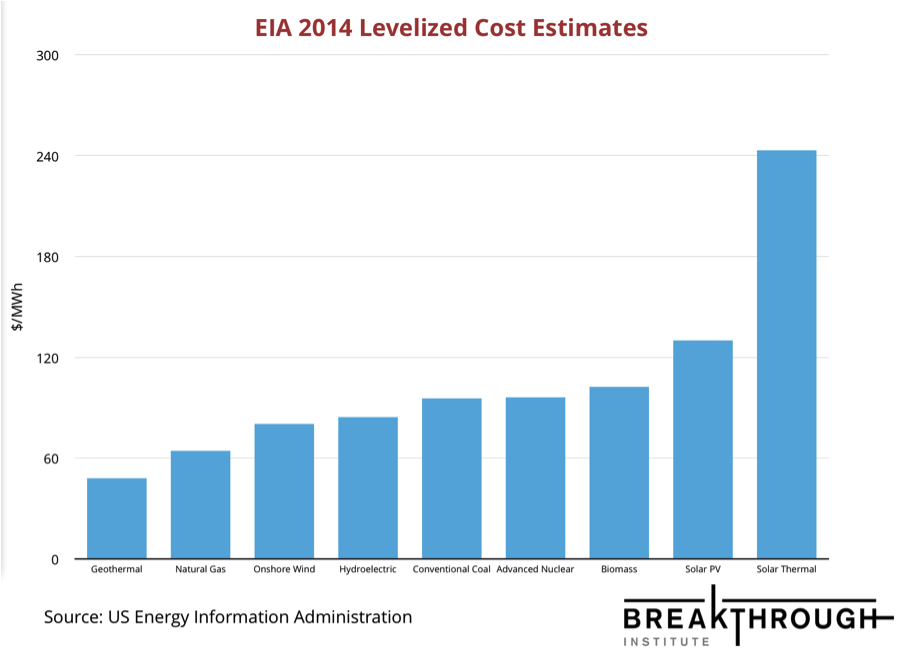 The Intergovernmental Panel on Climate Change (IPCC) recently provided their own global estimates of LCOE as a part of their widely covered Fifth Assessment Report, released earlier this year. They peg the median cost of utility-scale solar PV above $150/MWh, sometimes even breaching $200 to $300/MWh depending on actual production of the solar plants. Rooftop solar PV is even more expensive, with a median LCOE above $200/MWh assuming high generation rates. 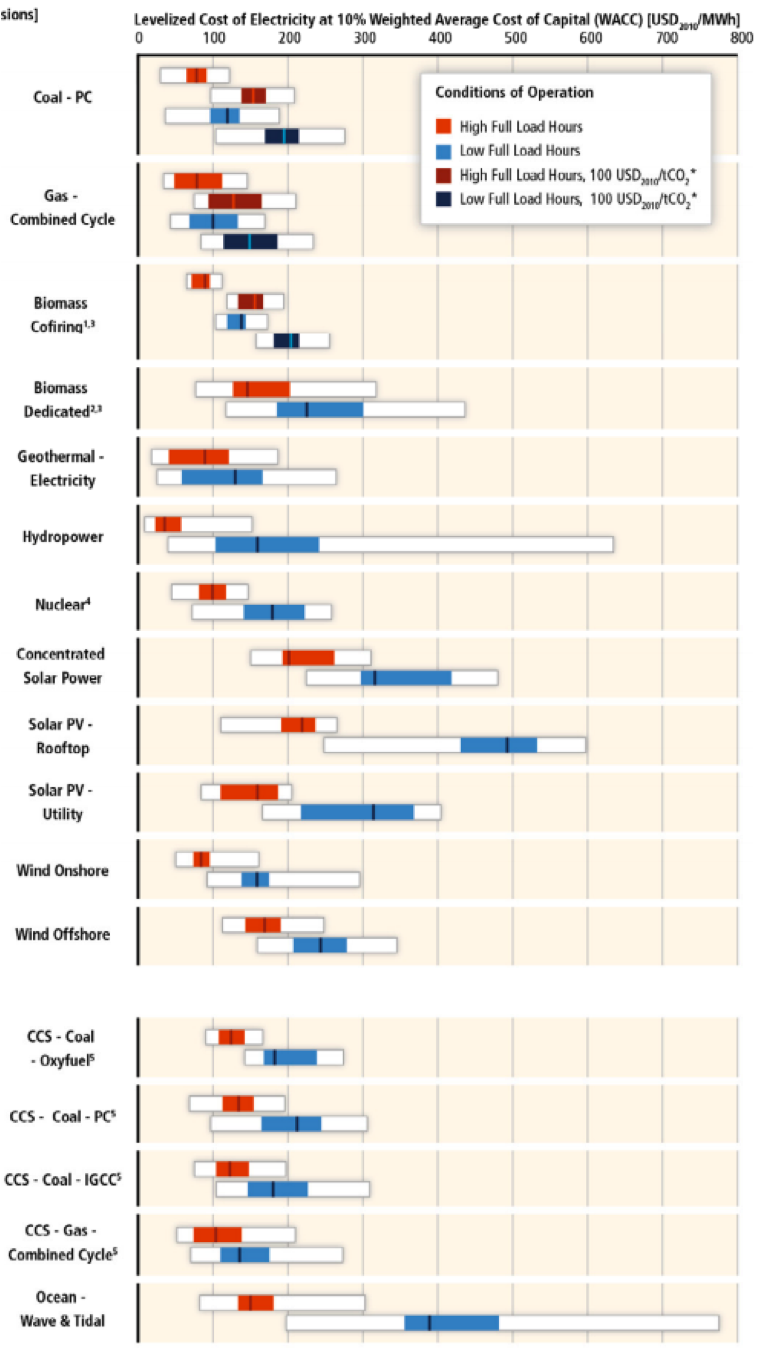 In their recent solar PV technology roadmap, the International Energy Agency included an LCOE range for utility scale solar of $80 to $190/MWh, with real costs in the range of $110 to $142 in Germany, the location of some of the cheapest solar in the world. 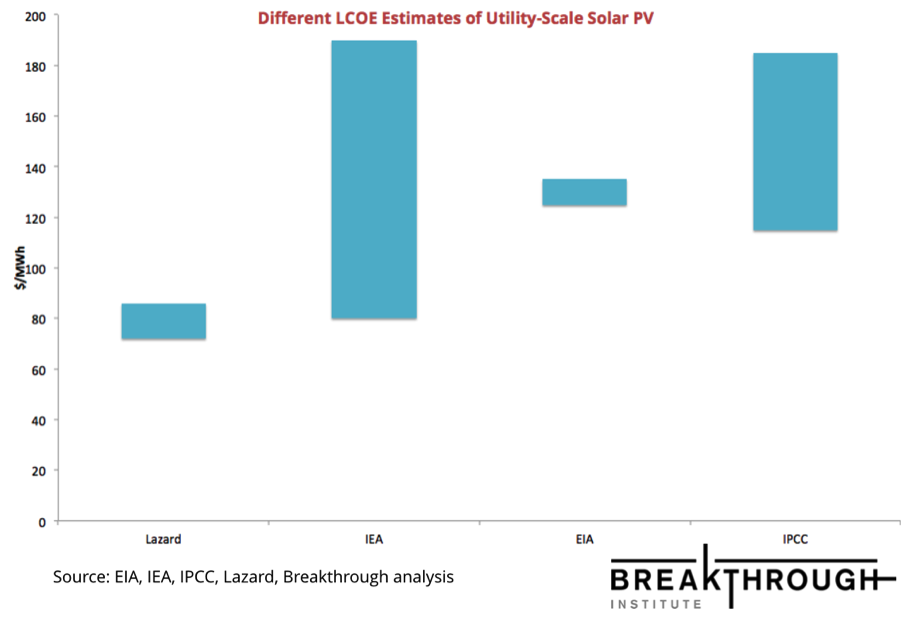 So Lazard’s estimates for the levelized costs of solar are significantly lower than other recent estimates, often by a factor of two or more. I imagine defenders of Lazard’s figures will insist that EIA and IPCC are out of date, and Lazard is presenting the most cutting-edge data on the most recent projects. But based on their revealed sources (“Lazard estimates”) and the narrow range they use for solar, I think it’s fair to speculate that they’re missing a significant sample size that other analysts are including. 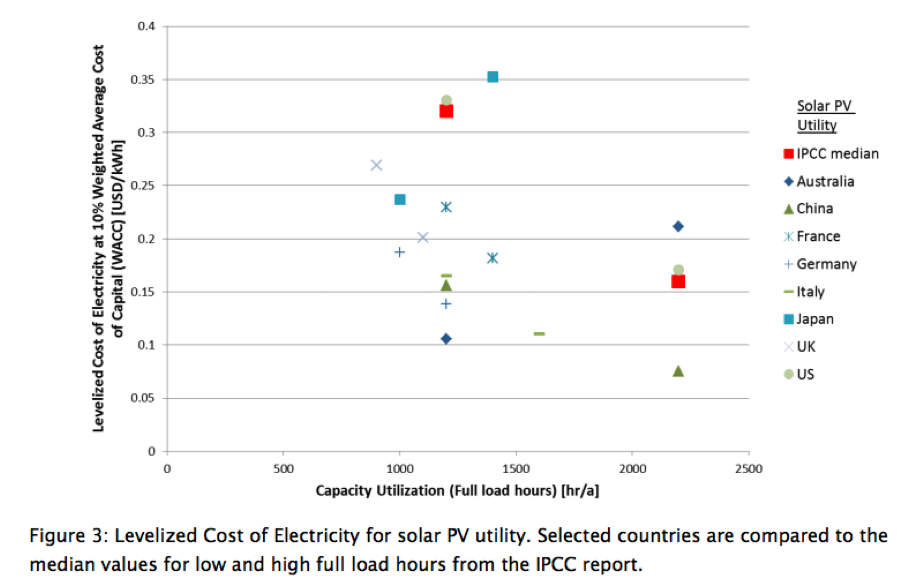 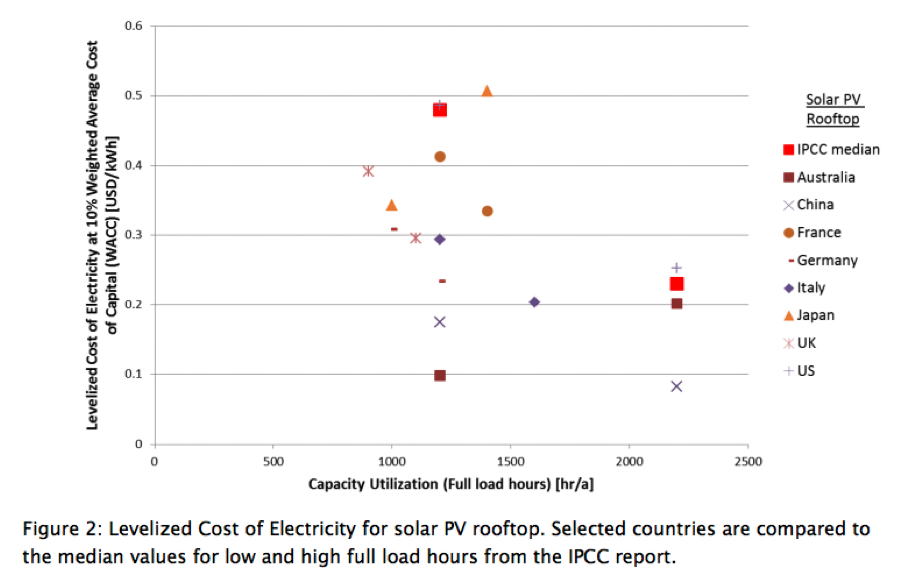 While they are forwarding Lazard’s gospel that solar is now competitive with natural gas, many solar advocates are also pushing the IEA’s recent report calling for continued subsidies and carbon prices to make solar competitive in the future. So which is it: Is solar competitive today or does it require decades more policy support?

Solar costs have plummeted in recent years. But unfortunately, as costs have come down, it’s only become more difficult to get reliable estimates of what the costs actually are today. This is what happens when analysts cherry-pick from among the most successful projects and emphasize the subsidized costs of energy, ignoring incentives like tax credits, portfolio standards, and net energy metering. What the most comprehensive data show is that, when all costs and available project data are taken into account, solar remains significantly more costly than fossil fuel competitors.

We should celebrate and learn from the major recent cost reductions in solar. But I’m not sure how analytical sleight of hand is supposed to help make solar even cheaper and more competitive in the future.