The Bottom Line on iPhones vs. Refrigerators

The Cloud Begins with Coal" Author Responds to His Critics

It’s uncontroversial to note that the global information-communications-technology sector (ICT) uses a lot of electricity. But convert that observation into a per capita form, illustrated, for example, by how many kilowatt-hours an iPhone might use, and protests and invectives sprout up faster than windmills in Iowa.

In response to our new report The Cloud Begins with Coal: Big Networks, Big Infrastructure, Big Power, some in the media got the point, but others seized on the comparison between an iPhone and refrigerator’s annual energy use and made claims of cherry picking and questionable assumptions. It should be obvious -- though apparently not for some -- that we are not talking about the few kilowatt-hours (kWh) a year needed to recharge the battery inside an iPhone, iPad, or their equivalents.

The relevant energy used by a smartphone comes from the entire ICT infrastructure that makes mobile broadband possible and instantly available. When everything in the ICT ecosystem is accounted for, one finds that a single iPhone or tablet can easily use – or more properly, cause to be used – at least 400 kWh per year. That’s roughly the same as a high-efficiency residential refrigerator.

Before unbundling the specific assumptions and data that lead to the surprising iPhone-refrigerator convergence, there is an easy sanity check as to whether such an outcome is reasonable. One can simply, and somewhat simplistically, divide the widely published figure of 1,000 billion kWh for global ICT electric use1 by the world’s nearly three billion Internet-connected devices, which yields about 330 kWh per year as an average electric use per device. That’s close to a refrigerator. Of course an average means some devices use a lot less, some a lot more energy. An average also doesn’t reveal critical trends seen in a device-specific estimate of the unique “fuel cycle” of a smartphone or tablet.

Accounting for the fuel cycle of a networked computer, whether stationary or mobile, is unlike that for any other consumer product. Using a single car, for example, does not require dozens or hundreds of other cars all over a city to be constantly idling, and then rev up the instant you start driving. This is precisely what happens with a networked computer. Surf the Internet, check Facebook, or watch a video, and while the handheld device starts to draw down its battery, computers all around the country and the world light up nearly simultaneously.

Where iPhones and cars are similar, however, is in accounting for the energy required to produce the silicon and steel components, respectively (amortized over the product lifespan), and in how energy use depends on behavior. The equivalent of accelerating hard and driving fast in the Internet ecosystem is watching video on a tablet.

How exactly do people drive their smartphones and tablets? From there one can make an estimate not only about the electricity a single iPhone causes to be used, but the implications for future energy demand.

Wireless network architecture, hardware, and energy use was originally configured primarily for voice and similar data-light tasks like texting. That network is now necessarily undergoing radical change to accommodate the data deluge from smartphones and tablets. Voice traffic dominated the mobile network until 2010. Network traffic for voice use has changed little for years and is now essentially irrelevant. Cellular network traffic is utterly dominated by data, up 400-fold since 2007. That date is no coincidence; it marks the iPhone’s introduction.

A recent industry survey revealed what nearly everyone knows anecdotally, if not personally, regarding how smartphones are used. Time spent watching video is already approaching the time an average smartphone is used for simple phoning. 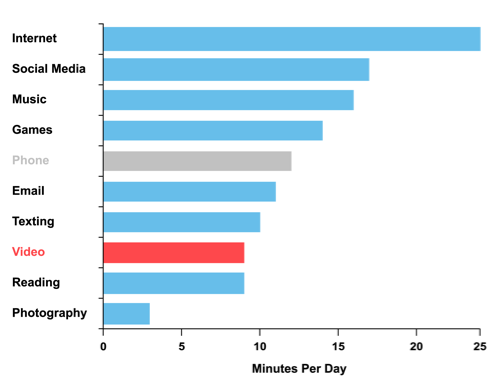 While phone calls, texts, and emails consume at most a few MB per month per user, data use rises a thousand-fold to the GB level when watching video, browsing the Web, or keeping up on social media. The average traffic for smartphones already approaches the GB per month level, and for mobile PCs (which now migrate to tablets), average data use rises to several GBs per month. 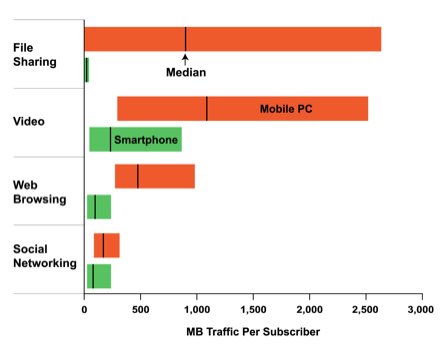 Data Source: Ericsson Mobility Report: On The Pulse of the Networked Society, June 2013

For our representative exploration of the electrical ‘exhaust’ of driving an iPhone or iPad reasonably hard, we consider someone watching one high-definition video per week. Per Netflix, an HD video is 2.8 GB/hr, which totals 145 GB annually. (Note that this is, perforce, higher than the average in the above survey, but today’s heavy user becomes tomorrow’s average user.)

Now we need to know two things – the embodied energy in the form of the annualized electricity to manufacture the iPhone or tablet, and the electricity used per GB in the networks.

The activity on the wireless broadband networks is what makes the mobile Internet possible.2 As with data centers, facility information is usually proprietary, and the electricity consumption per bit also depends on location, especially the age and type of equipment. Estimates of cellular energy found in the technical literature range widely from 0.1 to 19 kWh/GB.

For the purpose of our representative calculation, we use the lower end of the range: 2 kWh/GB.3 This leads to about 300 kWh per year for a smartphone or tablet using 145 GB on cellular networks.

Annualized embodied energy is calculated by dividing the total energy used to manufacture a product by its lifespan. Information equipment is uniquely energy-intensive to manufacture, and has a far shorter useful life than most other manufactured goods. Refrigerator lifespans run 10 to 15 years, cars a decade, but smartphones typically last three years. Some surveys find the average mobile phone is replaced every 18 months.

Thus while some estimates put the annualized embodied energy for a tablet at nearly double that of a refrigerator, for the purposes of our calculation we use a more conservative estimate (below) of about 100 kWh per year. 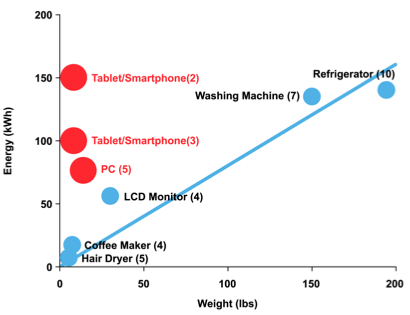 Data Source: A Tool to Estimate Materials and Manufacturing Energy for a Product, MIT, 2009

Embodied vs. Operating Energy For A Cellular Base Station 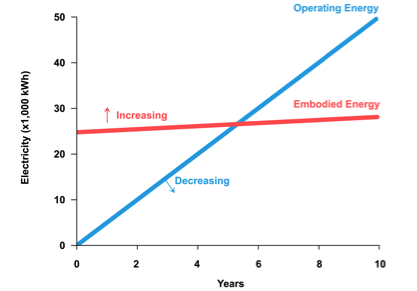 For the sake of simplicity we ignore embodied energy in the upstream infrastructure. When you add the 100 kWh/yr for the smartphone’s embodied energy to 15 kWh/yr from data centers and the 300 kWh/yr in the wireless networks, you get a total of 415 kWh per year, or, roughly the same as a high-efficiency residential refrigerator.

As mentioned earlier, if the smartphone is used only for phone calls and texting, it will use less electricity. If it is used to do more than watch a video weekly, from social networking to web browsing and file sharing, then the energy used rises substantially. This is particularly true if the smartphone is used in geographic regions where, typically, slightly older network equipment is in use. Per device energy use can easily approach that of two refrigerators.

And in the future? Smartphones and tablets will use less electricity per GB. But if forecasts of traffic and behavior are correct, the GB consumed per smartphone and tablet will rise far faster than gains in efficiency. Furthermore, as the world migrates towards one refrigerator per household, it also evolves more rapidly towards several smartphones and equivalent per person.

Mark P. Mills is CEO of Digital Power Group, a tech and investment advisory, and a Senior Fellow with the Manhattan Institute. He coauthored the book The Bottomless Well, and has a forthcoming book on Big Data.