Sounds like a sensible goal, but there’s reason to think that eliminating fossil fuel subsidies wouldn’t be nearly as transformative as is often suggested. In this post, I’ll briefly explain why that’s the case.

Energy subsidies are a tricky business. Clean energy advocates insist that fossil fuel subsidies prop up mature technologies and stymie newcomers like renewables and advanced vehicles. Renewables and nuclear tribalists alike condemn subsidies to other camp's favored technologies. These days, there’s at least some piece of published analysis to back up any argument about energy subsidies, whether it be their usefulness, waste, or inequity. 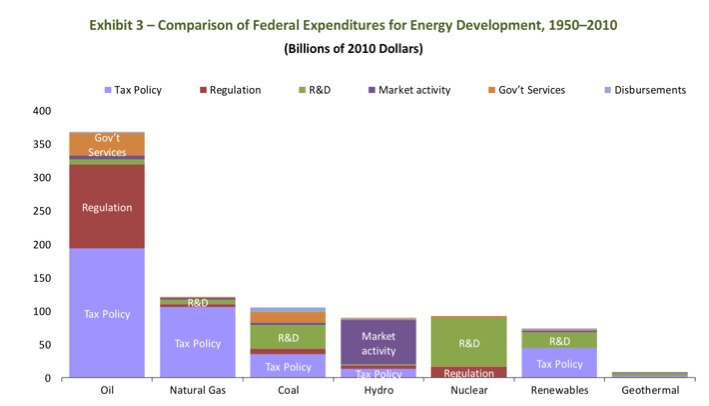 It looks like fossil fuels are the big winner, while zero-carbon technologies have the deck stacked against them. Again, though, other reports tell whatever story the authors want. Here’s renewable advocates Nancy Pfund and Ben Healy in 2011, somewhat in contrast to the NEI report: 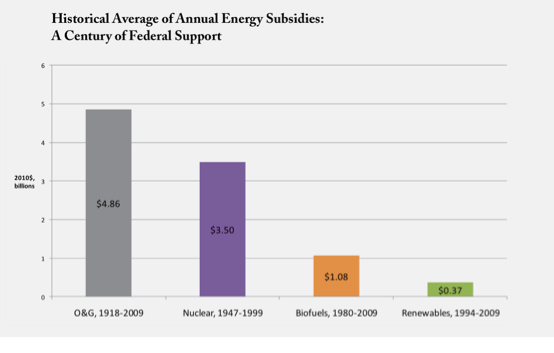 By their telling, renewables have received almost no relative subsidy support, and are dwarfed by fossil and nuclear alike.

Of course, NEI has an interest in making nuclear subsidies look reasonable, as do Pfund and Healy for renewables. So these reports are easy to dismiss by opponents. But all accounts seem to agree that fossil fuels are by far the largest beneficiary of public subsidies. That suggests that fossil fuel subsidies should be phased out, a move that would significantly benefit emerging zero-carbon technologies. Right?

Not so fast. While fossil fuel subsidies do account for the bulk of historical subsidies, the per-unit subsidization of fossil energy today remains much lower than it is for renewable energy technologies.

The US Energy Information Administration recently released their latest account of federal energy subsidies, and I quickly ran the numbers to calculate the cost per megawatt-hour of generation. The numbers are certainly imprecise, especially on renewables, but they show what orders of magnitude we’re talking about.

So maybe fossil subsidies aren’t the hulking barrier to the clean energy revolution that they’re made out to be. They should still be eliminated as wasteful and inefficient, right? Again, not so fast. Many fossil energy subsidies in rich countries are unnecessary — see this 2013 paper by Joseph Aldy. But many subsidy programs in poor countries are fuel subsidies for low-income populations. As this 2012 Nigerian case study by Morgan Bazilian and Ijeoma Onyeji shows, “Justifications for removal [of fuel subsidies] often do not adequately reflect the specific environments of developing country economies.” Often, a choice to end a fuel subsidy is a choice to make energy more expensive for the poorest among us.

Much like the lack of a carbon tax, the endurance of fossil fuel subsidies is often used by clean energy advocates as a smokescreen for how immature and challenged their favored technologies actually are. “If only we had a carbon tax and/or fossil subsidies were phased out, the playing field would be level and nuclear and/or renewables would take off!” I don’t buy it. As the above numbers show, there must be some reason other than subsidization for fossil fuels’ continued dominance. (I’d argue it’s a combination of abundance, energy density, storability, transportability, variety of applications, and, yes, infrastructure lock-in.)

So yes, we should tax carbon and we should phase out unnecessary fossil fuel subsidies. But neither of those, nor indeed the two together, are panaceas. Pursuit of those policy actions should not let us forget that an energy transition is fundamentally a technological — not a price-based or pollution regulation — challenge. If we want solar panels and nuclear reactors and electric vehicles to replace fossil fuels, they simply have to do a better job at powering the global economy. As Brad Plumer recently summarized, we’re making progress, but we’re just not there yet.