The Lessons of Hinkley Point C

Why Nuclear Needs to Get Cheaper, Faster

The energy-geek world I inhabit has been abuzz this week with the announcement of commercial terms for the construction of 3.2 GW of new nuclear power in the UK, to be known as Hinkley Point C. Total cost to first operation is £16 billion, comprising £14 billion in construction and £2 billion in costs to date. At £5,000 kW installed, we are talking some serious coin here.

To put that generation size in the Australian context, it’s about the same as the combined capacity of Loy Yang A and B. These dirt-burning brown-coal power stations provide 47 percent of Victoria’s electricity and about 25 million tCO2-e per year. Hinkley Point C is a massive energy development.

A wholesale price of £92.50/MWh has been agreed for the first 35 years of the life (which will drop to £89.50 if a new reactor at Sizewell is built). This price includes mandated funding of future decommissioning and waste management. Should market prices rise above this, the operator will return the difference. Should prices fall below this, the operator will be topped-up.

What has been achieved in the UK is worthy of praise. This deal provides certainty for both investors and consumers. Without certainty there will be no large capital investment in clean energy of any flavor. This reform structure should be of interest to anyone who wants to see clean energy of any kind enter private markets at appreciable scale.

As Kirsty Alexander of Nuclear Industry Association in the UK stated:

The Hinkley deal represents the first achievement of the Electricity Market Reform, designed to attract non-public investment into areas the market would not in itself invest in.

Left to its own devices, the market is more likely to invest in gas power stations. Capital costs are low, and although the cost of the fuel is high and unstable, these costs can be passed on to consumers. Low carbon technologies like nuclear and renewables have the opposite character. They have high capital costs and low running costs. This is why the International Energy Agency said that EMR was essential to delivering a transition to low carbon energy.

This harks back to remarks made by Professor Tony Owen regarding the prospects for nuclear investment in Australia, previously reported here:

If the CEO of, say, Origin Energy said to the board, “I’ve got a great idea. Let’s spend $5bn of the company’s money, for which we will not start seeing a return for at least 5 years,” he would be laughed at. In fact he would probably be sacked.

The UK market reform to appears to have succeeded in overcoming this barrier. The very fair question remains: Is this a good or a bad price? As ever, comparison is the only sensible way to answer it.

Compared to current wholesale prices in the UK, it looks awful. It’s nearly double, and close to the retail price. This comparison is relevant if such prices were expected to continue. They are not. Dirty coal provides about 40 percent of UK electricity at currently much cheaper prices. This situation is coming to an end. So retrospective comparisons are of limited use. It is more informative to compare to the other options moving ahead.

Hinkley is expected to be competitive with new combined cycle gas in the UK. (Government estimates range from £89-£111 MWh.) That’s a big tick. The strike price is also lower than the government-agreed strike prices for other clean energy options. This is shown below (and discussed in further detail in a recent post from Mark Lynas).

The above prices are a little soft on the clean energy competition, as they do not incorporate system costs like grid enhancement for effective management of intermittency or provision of backup.

The Hinkley price has no impact in 2013; it will have an impact in the 2020s, right through to 2080! With a 60-year rated life, the UK is bringing on 3.2 GW of clean electricity price certainty for the first 30 years. That’s impressive. If one also considers the phenomenally large advantages of nuclear in terms of land use and resource consumption and the absence of air pollution, this is a clean energy project that deserves support. 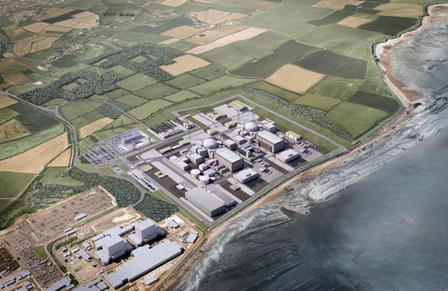 Commentator George Monbiot bemoaned that the UK has not instead moved to commission its first PRISM fast reactor that will operate using waste as fuel. I share his enthusiasm for the technology and his frustration at the recent silence. I also believe and hope that these two nuclear projects are far from in competition with each other in the UK. Hinkley Point C is 3.2 GW in size, equivalent to around 11 PRISM reactors. GE Hitachi currently wants to construct two of them in the UK, the first two commercial builds in the world. The only outcome of nuclear versus nuclear is a loss in the fight against climate change, and the environmental imperative for clean energy is far greater than that for near-zero waste.

I argue that nuclear power represents great long-term value when all the reliability and environmental benefits are considered against a relatively small premium compared to fossil fuels. Sadly, “great value” and “too expensive” are perfectly capable of co-existing. On that point Monbiot is also right that it’s still too damn expensive. We need to replace every coal plant in developed nations and displace every future coal plant in a fast growing developing world. This is not the type of price that will do it.

In the case of the UK, market reform has supported the great value of nuclear over the considerable up-front expense. It seems adequate political consensus on the following key points was required:

•Climate change is real and urgent

•Emissions must be cut deeply. That cannot all be done with offsets; clean electricity is required

•Nuclear power is required to meet the challenges outlined above

I only wish turn-key political solutions were as exportable as turn-key nuclear solutions. Consider Australia:

•Our newly governing Liberal/National Coalition has a track record of comparatively greater nuclear support. It also has current leadership that has downgraded climate change to a national irritation for which the cure seems to be some sort of aggressive cultural and intellectual de-lousing.

•Our recently deposed Labor Party took huge political hits to put a price on carbon dioxide emissions, while maintaining opposition to nuclear power. (I am very impressed and encouraged that senior Labor figures are putting this policy position forward for reconsideration under the new leadership.)

•Our Australian Greens shout “climate emergency” (and I agree), only to take a deep breath and attack nuclear power as seemingly the only thing worse than climate change.

So, take a political mess like that and prices at anything like £5,000 per kW and what have you got? Little chance for large-scale clean energy, that’s what. Or, take developing markets where the imperative to supply lots of electricity right now far outweighs concerns about climate or pollution and what have you got: construction of everything and anything, including a massive new fossil sector that our climate budget can ill-afford.

What we need is for nuclear power, as the only sufficiently scalable solution, to reach a price point where it becomes the true no-brainer for replacing and displacing coal and then gas. It’s amazing how much a massive and undeniable price advantage can cut through political quagmire. High prices require equally high political consensus and the opposite is also true. Unless we get prices that drive a rapid expansion all on their own, we are likely to continue to see failures globally of the type Australia has seen since 1960: growth in clean energy, with bigger growth in fossil fuels. 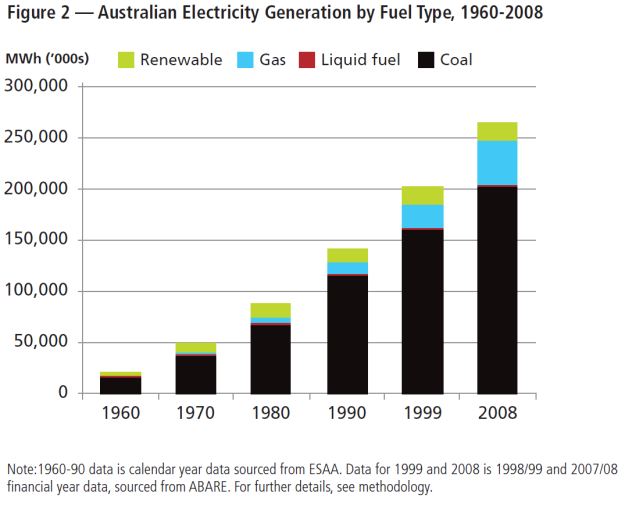 Furthermore, it seems nuclear opponents are increasingly dressing up their ideological bias in the economic case as their traditional arguments fail. Their economic arguments are unbalanced and with a clear agenda and they are not completely wrong!

The recent US experience with a gas boom is the case in point of what needs to happen with clean energy. There, electricity production has moved strongly away from coal, and emissions have fallen to 1994 levels. It’s the right example, with the wrong fuel that falls well short of the outcome we all need. 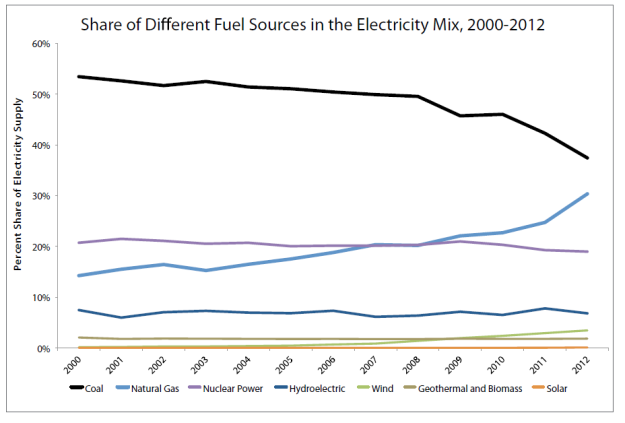 The two lines heading up in the US are wind and gas, with gas doing much more than wind. Image from The Breakthrough Institute Report “Coal Killer.”

The lessons from the UK this week are hugely encouraging. With the right positioning of politics, electricity market reform for large scale clean energy is possible. What we need now is for nuclear industry players to speak to us and tell us how, over the coming years, they are going to deliver this product at lower and lower prices, to ease the political pressure and make commissioning great big gobs of clean energy the no-brainer it needs to be. Will this come through Generation III+ small modular reactors (SMR), integral fast reactors (IFR), liquid fuel thorium reactors (LFTR) or simply big learning gains through the new build currently taking place? (We are already seeing the latter in China and South Korea.) Hopefully, lower prices will come from all these places and more.

Nuclear power is clean. It’s safe. It’s efficient. It can make a big difference, fast. Waste can be managed until we use it as fuel, and fear of radiation can be defused. It is, as I have said, a great value. What advocates cannot do is make it cheaper than fossil fuels when it isn’t, in a world with weak consensus on climate change action and lackluster energy planning.

We need to keep working for that climate consensus, for sensible long-term policy to support massive clean energy and to overcome the ill-conceived objections to nuclear. At the same time we urgently need a stronger and more visible vision and plan for better nuclear prices and faster roll out, and this needs to come from the industry.

Ben Heard is the director of Decarbonise SA, dedicated to moving South Australia to zero greenhouse gas emissions, where this post originally appeared.