When the global economy recovers, who will satisfy China’s increasing demand for oil? In large part, the answer is America’s newly thrifty drivers, according to Douglas-Westwood’s Steven Kopits.

First, the backdrop: Chinese oil demand has been relatively weak much of the year, a consequence of sluggish exports and economic growth. But it’s presumed that demand will pick up at some point, probably soon. And that triggers a certain worry, for there is a debate under way as to just how much daily oil supply we will have over the next few years and beyond.

A trendy scenario says we are on the cusp of an age of fossil fuel abundance in which a flood of new oil and gas supplies will utterly disrupt geopolitics. Kopits favors the competing perspective, which is that oil is scarce, and nations will struggle in perhaps a dangerous way for access to it.

Given the scale of intellectual firepower contributing to the abundance side of the debate (such as this and this), it’s worth delving into the scarcity argument.

Kopits starts with scrutiny of the last five years. Since 2007, oil demand in the world’s develop nations (the red line) has dropped by 4 million barrels a day, a result of smaller cars, fewer miles driven, and a generally more frugal motoring public at a time of soaring gasoline prices. Meanwhile, consumption in the developing world (the green line), especially China, has jumped by 7 million barrels a day. 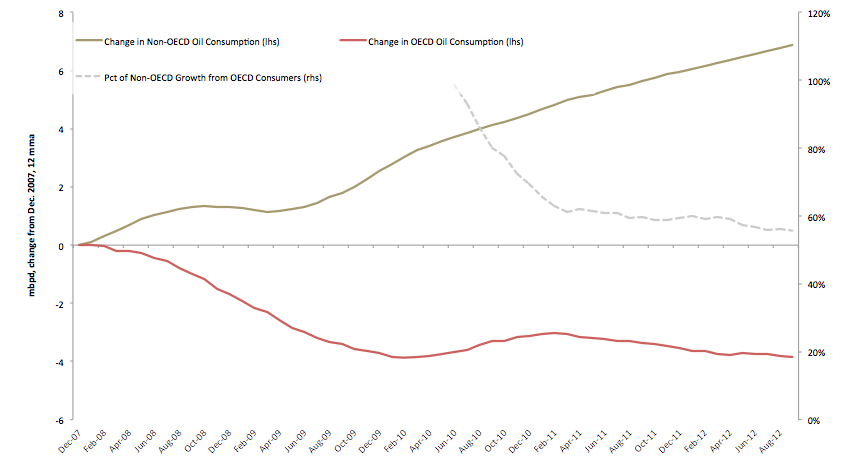 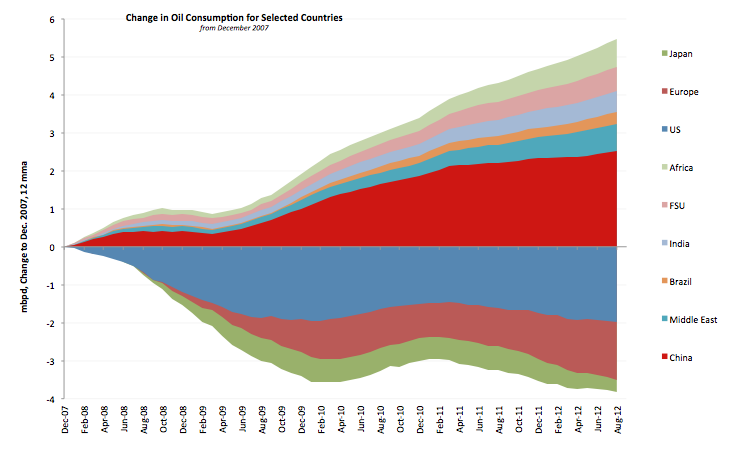 This is the money chart. It covers the same years, and breaks out some of the countries. The middle two (red and blue) are, respectively, China and the US. Specifically, Chinese consumption has grown by 2.5 million barrels a day by the time August 2012 rolls around, and US demand has shrunk by 2 million barrels a day. Hence, Kopits’s assertion that, as Chinese appetite grows, thriftier American motorists more or less compensate with their lesser consumption. “Europe and Japan, broadly speaking, cover the increased demand of the other [developing] countries shown,” Kopits says.

Steve LeVine is Washington correspondent for Quartz, a new kind of global business publication, where this article first appeared. LeVine is also an adjunct professor in Georgetown University’s Security Studies Program in the Graduate School of Foreign Service and a Schwartz Fellow at the New America Foundation.