The International Energy Agency grossly overestimates how much energy efficiency can reduce greenhouse gas emissions, according to scholars cited by the agency’s own “World Energy Outlook,” bringing into question its claim that such measures can account for almost three-quarters of all emissions reductions by 2020.

Experts expressed concern that governments relying on IEA data for global warming mitigation efforts would overinvest in efficiency and under-invest in low- and zero-carbon energy technologies.

The Paris-based agency’s projections of emissions reductions from energy conservation and efficiency are based on questionable assumptions, experts say, pointing out that rebound effects frequently take back much or all of the energy savings that efficiency policies attempt to capture.

Though the “rebound effect” is little known to policy makers, researchers around the world have published well over 100 peer-reviewed articles documenting empirically that energy savings from increased efficiency of factories, cars, and houses can result in rebounding energy consumption. Depending on the sector in question and the efficiency policies that are implemented, estimates of rebound range from just 5 percent to well over 100 percent.

Yet in its “World Energy Outlook,” the IEA claims that total rebound from all energy efficiency policies is just 9 percent overall — without accounting for differences across sectors or economies. Experts on rebound said a 9 percent rate would be an underestimate for developed economies and would have little to do with developing economies, where rebound is known to be far more significant.

The IEA report cites two leading rebound researchers to justify its rebound estimate: Karen Turner of the University of Strathclyde, Scotland, and Steve Sorrell of the University of Sussex. Both Turner and Sorrell reject the IEA’s 9 percent figure and expressed confusion as to how it had been derived.

"I don't know how they can say that," Turner told the Breakthrough Institute.

"A 9 percent average seems too low given what we know about macroeconomic rebound effects," added Sorrell, "as well as the much higher rebound effects in developing countries."

The IEA's downplaying of rebound also clashes with a 2011 European Commission report that found rebound effects are significant. Two new reports released this month by the Asian Development Bank and the Germany-based International Risk Governance Council both called for greater attention to the issue.

If the IEA’s analysis of rebound is as flawed as experts suggest, it will have major implications for the policy makers who have to make tough decisions about how to meet growing energy demand while combating global warming.

With a global rebound rate of 9 percent incorporated into their climate stabilization scenario, which projects carbon dioxide at 450 parts per million, the IEA estimates that various energy efficiency measures will reduce carbon dioxide by roughly 2.3 billion tons per year by 2020 and 7.1 billion tons annually by 2035.

The best available research, however, suggests that rebound is far more significant.

Using macroeconomic models, Terry Barker, an economist and director of the Cambridge Centre for Climate Change Mitigation Research, estimated the total global rebound effect — comprising direct, indirect, and economy-wide rebound — to be 31 percent by 2020, rising to 52 percent by 2030, given all IEA efficiency recommendations are implemented.

In other words, the Barker study shows that more than half of the carbon dioxide savings that the IEA projects will result from efficiency policies would be negated unless increased energy consumption is met by zero-carbon sources. A rebound rate of 52 percent would eliminate the IEA's projected emissions reductions from efficiency by about 3.2 billion tons annually by 2035 — it would require the construction of about 530 one-gigawatt nuclear power plants to offset this amount of emissions.

Not taking into account high levels of rebound thus results in underestimates of just how much low carbon power will be required to meet global development needs and reduce emissions.

The IEA report ignores the major reviews of rebound, including the largest one ever conducted, led by Sorrell for the United Kingdom Energy Research Centre in 2007. It also fails to mention the 2011 European Commission review, which concluded, "The evidence does not support views that rebound effects are too small to be significant."

The IEA does, however, cite a white paper by an energy efficiency advocacy group, the American Council for Energy Efficient Economies. The ACEEE paper includes a highly selective review of the research and concludes that direct and indirect rebound "can be combined to estimate total rebound of about 20 percent." Even still, that rate is more than double the one provided by the IEA.

In its own review of the literature, the Breakthrough Institute found that direct rebound for consumer energy services — such as indoor lighting, appliances, or more efficient cars — ranges from about 10 to 30 percent, but that indirect re-spending effects and macroeconomic rebound from those efficiency savings can be much higher. Re-spending effects alone can add an additional 5 to 25 percent on top of direct rebound effects, driving the total rebound effect above 50 percent.

In productive sectors, such as electric utilities, construction, agriculture, manufacturing, and communications, rebound is far more significant. In a major study of 30 such sectors in the United States using the most accurate available data, Harry Saunders found an average direct rebound rate of 62 percent over a 20-year time period from 1980 through 2000. Similarly, the European Commission found direct rebound of 30 to 80 percent for fuel efficiency in commercial transport.

Moreover, a number of modeling studies reviewed by the European Commission report as well as the Breakthrough Institute found macroeconomic rebounds of 30 to 50 percent or greater among a range of national economies, including some exceeding 100 percent.

All these findings suggest that the IEA’s estimate of a 9 percent negation of savings from efficiency by 2035 due to rebound is well off the mark even in developed economies. As a global rate, 9 percent appears to be even less defensible.

In a report released this month, “Asia’s Energy Challenge,” the Asian Development Bank acknowledges that “a large and growing body of research has shown that energy efficiency gains do not bring one-for-one reductions in energy consumption because of the so-called ‘rebound effect,’” which, it notes, is more significant in developing economies.

By reducing the effective cost of energy, efficiency allows individuals and firms to consume more — a clear benefit to not only 2.8 billion inhabitants across Asia who currently live without access to modern electricity, but also a challenge to the view that efficiency will be as major a source of emissions reductions.

The ADB cites a 2012 study by Li Li and Han Yonglei, who found that rebound in China from 1997 to 2008 was high, reaching levels labeled “backfire” in three of those years. Efficiency gains led to increased, rather than decreased, overall energy consumption. Two other scholars cited by the ADB, Boqiang Lin and Xia Liu, found overall rebound in the Chinese passenger transportation sector of 107 percent between 1994 and 2010. This figure also suggests backfire.

Similarly, a report released this week by the Germany-based International Risk Governance Council acknowledged the fact that rebound tends to be far higher in developing countries, concluding: “There is a clear and urgent need for studies of rebound in developing economies. The magnitude of rebound that is likely to be observed in these studies will probably be much larger in some cases than the analogous values observed in the industrialized world.”

In response to a query from the Breakthrough Institute, IEA staff explained that their low rebound estimate was based on the assumption that most studies of direct rebound have examined rebound in the personal transportation and residential sectors. IEA’s modelers assume that rebound is lower in industrial and service sectors.

Even in end-use sectors rebound effects are far higher in developing countries, where demand for energy services is much less saturated than in developed economies. Pioneering research in India by Joyashree Roy found that efforts to replace diesel generators with more efficient solar lanterns resulted in rebounding energy use, with energy-hungry consumers supplementing, not replacing, their diesel generators.

“It would be very difficult to say that rebound is just 9 percent. That’s not a representative value,” said Roy, a professor of economics at Jadavpur University in Kolkata, India. “If you really want to tell the truth you need to incorporate rebound and show how hard it is going to be to achieve sweeping energy savings from efficiency improvements.”

The notion that energy efficiency measures might bring deep emissions reductions along with greater economic growth has long promised an attractive “win-win” for policy makers and business leaders. The extensive literature on rebound presents an uncomfortable challenge to this view, undermining the idea that efficiency leads to decreased energy use on anything approaching a one-to-one basis.

“The argument that you can boost the economy, reduce energy consumption, reduce emissions, and boost welfare all at the same time is very seductive,” says Sorrell. "If you start raising questions about whether that is really the case, it doesn't go down too well.

All of the researchers offered ways for the IEA to improve its modeling.

"I don't think a global, across the board figure is appropriate," Sorrell said. "You should try to disaggregate the assumption as far as the evidence permits,” he added, while pointing to the Barker study, which assumes a certain level of magnitude for direct rebound and then models various indirect effects.

“It's hard to argue about a number, given that the evidence is so mixed,” Sorrell said. “But the best way to deal with this uncertainty is to emphasize it and to conduct sensitivity tests, rather than just picking a low number with limited justification.” 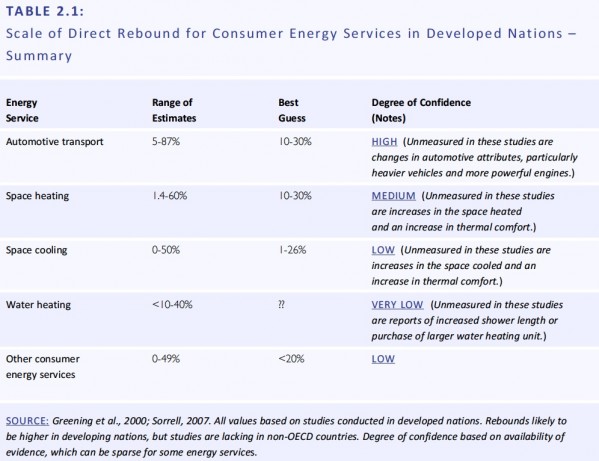 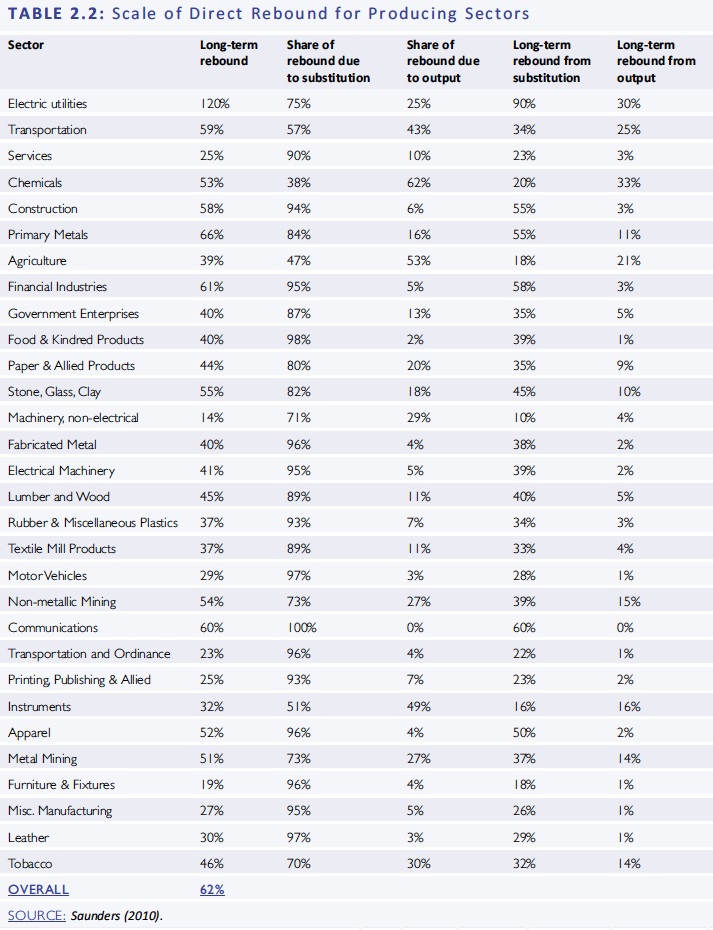 Both tables can be found in "Energy Emergence: Rebound and Backfire as Emergent Phenomena," The Breakthrough Institute, 2011.