Do We Need a New Green Revolution?

Earlier this week, Phillip A. Sharp and Alan Leshner argued in the New York Times that we need a new ‘Green Revolution,’ a step-change in agricultural productivity. The United States achieved tremendous productivity gains over the 20th century, the two science advocates argue, but...

Maintaining this level of productivity has been quite a challenge in recent years and is likely to become more difficult over the next few decades as weather patterns, available water and growing seasons shift further and threats of invasive weeds, pests and pathogens rise.

If agriculture is to have any chance of answering these challenges, we must have new and improved techniques and technologies. The problem is that agricultural innovation has not kept pace.

They go on to point to a crisis in productivity improvements and funding for agricultural innovation. Are they right? Three Breakthrough Senior Fellows — UC Davis’ Pamela Ronald, CU Boulder’s Roger Pielke, Jr., and Arizona State’s Daniel Sarewitz — weigh in below:

Roger Pielke, Jr: Sharp and Leshner are wrong on data and on mythology.

On data: Production is not productivity. Here is total factor productivity (TFP) 1948-2013: 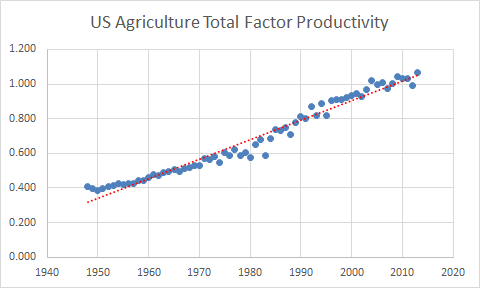 And here’s gross production in the United States, according to the Food and Agricultural Organization: 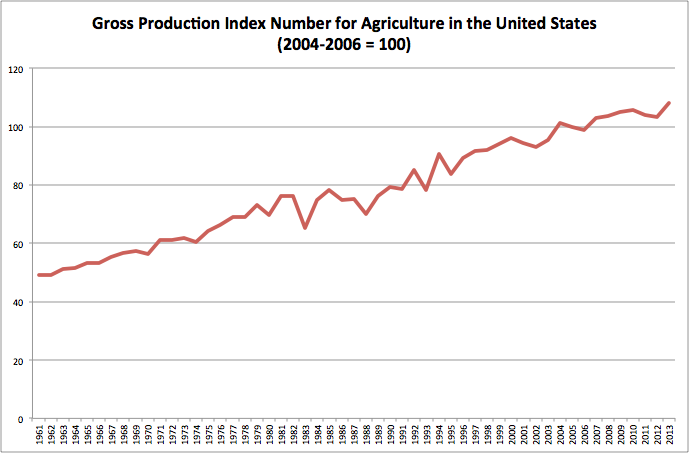 On mythology, the Green Revolution was not a ‘thing’ but a process, and it continues today. In fact, as you can see in the graph above, growth in TFP has been faster since 1980 than it was before.

All that said, it is interesting to see applied research getting its turn in the crisis spotlight, which has usually been reserved for “basic” and “blue sky” research.

Daniel Sarewitz: No field of science has ever been more criticized by the mainstream scientific community, and no field has ever consistently produced more benefit for humans, than agricultural science. My own casual theory here is that the strong link between farmer practice and innovation, the lack of a strong peer-review, individual-investigator culture, and the powerful influence of industry on research, have together earned the contempt of the academic research establishment for agricultural research. But as the productivity numbers show, the real-world results continue to speak for themselves. Quite the opposite for biomedical science, which is the most revered and highly funded area of research, but where innovation rates (for new drugs, at least) have actually slowed down decade-after-decade over the past 50 years or so.

There’d be nothing wrong with providing more funding for agricultural science, but I don’t see the evidence of a crisis.

Pamela Ronald: The article is spot on. Funding for agricultural research is dismally low. The numbers that Sharp and Leshner cite speak for themselves:

“Almost 40 percent of American research and development spending was focused on agriculture in the 1940s. Now it is 2%."

I completely agree with Dan’s point that "no field of science has ever been more criticized by the mainstream scientific community, and no field has ever consistently produced more benefit for humans, than agricultural science”

But I must disagree on his other points. Peer-review is strong, and we have a tremendous, diverse, and talented global agricultural academic research community.

Agricultural productivity has gone up in the US (for some crops; mainly corn) precisely because of research, but there is much more to be done. For example with the advent of BT corn, famers have reduced sprayed insecticides by 10-fold over the last 15 years. The advent of flood tolerant rice has led to a 4-fold increase in yield in Bangladesh because of genetic improvements. But these are just a couple success stories. There would be many more if agricultural research was a priority.

We still have 1 bilion malnourished children and many negative environmental impacts of ag. We need global governments to take action. We need consumers to stop being distracted by fears of new technologies and use those technologies for enhancing sustainable agriculture.

Roger Pielke, Jr: I agree that R&D for agricultural innovation makes sense, but the better arguments are the ones that Pamela laid out, not crying wolf by misusing data to suggest a crisis. Ends do not justify means, and policy arguments also need to be evidence-based.

Daniel Sarewitz: It’s true that the a larger share of federal R&D used to go to agriculture, but the main reason for this is that back then the government supported a much narrower portfolio of science activities, for obvious reasons: fields like molecular biology, material science, subatomic particle physics, solid-state physics, radioastronomy, computer science, etc. etc. etc. didn’t exist (or were in their infancy). Nor did the infrastructure (like satellites, supercomputers and accelerators). Moreover, prior to WWII, the government’s role in supporting science was very narrow and mostly a relic of late 19th century/early 20th century priorities around natural resource exploitation and westward expansion. So we supported agricultural science, mineral exploration and geological/geographic/coast mapping, etc. etc. Agriculture’s portion of the pie couldn’t help but radically decline as the government’s support for science, and science itself, expanded radically during the Cold War.

And I couldn’t agree more on the need for government action. But why should we believe that these problems are not being solved because of inadequate investments in research? It’s possible that that is a contributing factor, but putting more money into research is always a lot easier than addressing the underlying structural problems that are at the heart of such problems.

Pamela Ronald: Yes, there are many more scientific fields that need to be supported today and most are relevant to advancing sustainable agriculture. Society benefits from continual research innovation and application of new discoveries to enhance the agricultural enterprise. This includes research to address infrastructure challenges (e.g GPS to map out slope of a field so different varieites can be planted in appropriate places) as well as new seed technologies (e.g. marker assisted breeding, genetic engineering, genome editing). A paucity of agricultural research hinders our ability to mitigate the environmental impacts of agriculture and enhance food security. Agricultural research is an essential endeavor that benefits from modern tools and innovations.