The idea for this inaugural issue of the Breakthrough Journal was conceived this past winter, shortly after the death of Daniel Bell, the man with perhaps the best claim to having predicted today's fiscal crisis. In his 1976 Cultural Contradictions of Capitalism, the heterodox sociologist argued that rising individuation and declining social solidarity would undermine the social values necessary to sustain liberal democracy. Citizens of developed economies would increasingly reject taxation while demanding new public services, particularly entitlements.

Bell's prophecy, which has largely defined American political life for decades, finds its embodiment today in the rise of the Tea Party. Bell believed that for liberal democracies to continue to thrive, they would need to develop a new governing philosophy capable of sustaining public support for continued common investments in important public goods. We have, in no small part, launched the Breakthrough Journal in service of that aspiration.

To revitalize American liberalism, we must understand the roots of rising disenchantment with government and social inequality. Fred Block, one of Bell's former students, notes in these pages that a declining willingness to fund public goods is common to all wealthy nations and suggests that the growing fiscal crisis of the state both perpetuates political gridlock and pushes America's politics ever rightward. Dalton Conley argues that inequality itself risks becoming self-reinforcing due to the changing structure of the American economy, the relative nature of poverty in an affluent society, and the increasingly positional nature of housing and education -- developments that the old New Deal social safety net has been unable to address.

Progressive politics has failed to keep pace with these new global forces. Keynesianism, the north star of virtually all progressive economic thought, came of age during the postwar economic boom and never had to deal with the question of how to sustain economic growth in an increasingly competitive global economy, Rob Atkinson argues. As a result, progressives continue to imagine that simply stimulating consumer demand and redistributing wealth to those at the bottom will assure continued economic growth -- ignoring the critical and growing role that technological innovation and economic productivity play in advanced, developed economies.

At the same time, progressive cosmopolitans trumpet the imminent transcendence of the nation-state and insist that we need not concern ourselves with America's declining economic and political influence. According to the cosmopolitans, we should care no more about the economic prospects of unemployed autoworkers in Michigan than we do about struggling ragpickers in India. Besides, we will soon live in a single world market, in which it will matter little whether the goods we consume are produced in Guangdong, São Paulo, or Toledo.

This is religious whimsy, not the basis for a new progressive internationalism, writes co-founder of the New America Foundation, Michael Lind. The nation-state will persist for centuries to come, and is, in fact, the primary vehicle through which humanity has achieved socially progressive objectives for hundreds of years. If we wish to advance progressive social and economic objectives at either the national or the international level, contemporary liberalism should embrace the nation-state rather than prematurely consigning it to the dustbin of history.

And while the challenges that America faces today are indeed great, we should not descend into fatalism. Vaclav Smil lays out alarming numbers that demonstrate the close relationship between the massive decline of American manufacturing and the overall economic decline of the United States, but cautions against melodramatic narratives. Similarly, Hannah Nordhaus argues that environmental journalists turned the most recent honey bee collapse into a predictable eco-disaster narrative that reduced America's complex and resilient agricultural system to a predictable tale of greedy chemical and agribusiness corporations poisoning nature and threatening humanity with imminent ecological collapse. In different ways, both Nordhaus and Smil remind us that we should bring both greater sobriety and greater discernment to our evaluation of new risks.

Our hope is that this first issue reflects our embrace of criticism in service of creation. Punk rock, Dan Krewson notes, was as much a negation of overwrought, early-1970s "progressive rock" as it was an affirmation of the mostly underground garage rock of the early 1960s. The punks took rock back to basics -- to short songs that ended abruptly, primal screams, abrasive guitars, and violent drums -- but they also moved rock forward. In its embrace of do-it-yourself style and distinctly lo-fi sounds, punk music sometimes worked and sometimes didn't, but the movement opened up rock and pop to new possibilities.

Daniel Bell died before his dream of a new liberal politics could be fulfilled, proving some intellectual challenges to be too great for even the greatest intellectuals to accomplish alone. Our immodest hope is that Breakthrough Journal can pick up where Bell left off by gathering a new community of original and heterodox thinkers to engage in the messy experimentalism that has always been required to develop a new sound. 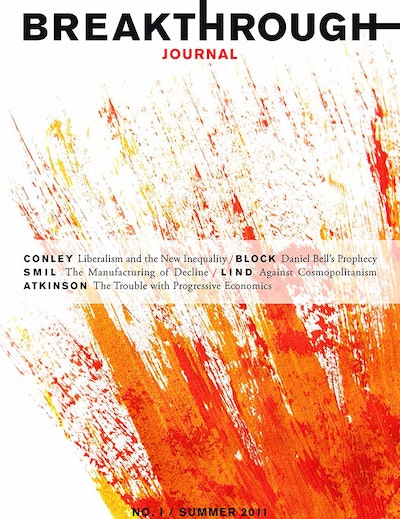