On Inconspicuous Consumption, the Complacent Class, and Identity Politics 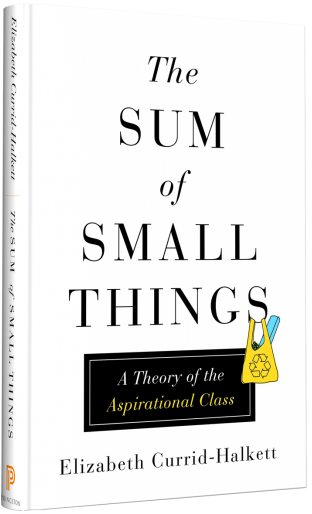 The Sum of Small Things:
A Theory of the Aspirational Class
By Elizabeth Currid-Halkett

Care for the environment, the lot of the global poor, one’s personal growth — such “postmaterialist” values, as Ronald Inglehart observed in the 1970s, only become possible for those of us who can take our food, shelter, and security for granted. All the better, ecomodernists tend to say; as global poverty inexorably falls, more and more of us have the luxury of occupying ourselves with the environment, our own quality of life, and the broader fate of those beyond our circles.

Elizabeth Currid-Halkett, a professor of public policy at the University of Southern California, delivers a startling rebuttal to this idea in The Sum of Small Things: A Theory of the Aspirational Class, out last year. Trawling through American consumption data (undoubtedly a fascinating trove), Currid-Halkett identifies a cultural elite that has indeed moved beyond the “conspicuous consumption” rebuked by Thorstein Veblen at the turn of the 20th century, but whose inconspicuous consumption today bodes worse for the values they understand their purchases to uphold. As mass production and globalization have made material goods increasingly available, Currid-Halkett shows, her “aspirational class” has turned to more discreet, more intangible forms of consumption: on education, time (by outsourcing household work), and health — on postmaterial goods, that is, that are increasingly essential for social mobility, and increasingly elusive for the lower and middle classes. This inconspicuous consumption manifests in a conspicuous cultural code that should be highly legible to anyone reading this review, or Currid-Halkett’s book, yet inaccessible to many more; it includes reading the New Yorker and the Economist, staying fit and well-traveled, and buying local and organic.

The habits of cultural elites in the United States, in other words, seem to validate the thesis of postmaterialism even as they unsettle the idea that those postmaterialist values might actually engender more equitable or environmentally sound outcomes. As generously as Currid-Halkett treats her subjects, she demonstrates forcibly that their preference for the local, artisanal, organic, and responsibly sourced is as much a function of virtue signaling and status preservation as it is about social or environmental consciousness. And while Currid-Halkett does not dwell on whether these cultural choices might in fact be worse for the environment, she is forceful on the point that they are inimical to society. Such moralizing motherhood practices as attachment parenting and breastfeeding, for instance, “are in and of themselves elitist and exclusionary, and they rely on cultural and symbolic capital and extensive unencumbered time that is not a part of most families’ prosaic interactions and daily life,” a point that Jennifer Bernstein made in these pages last year. Worse, in parading as virtues, such forms of inconspicuous consumption become that much more entrenched and intractable.

However materially endowed, we Americans have yet to differentiate self-actualization from preservation of status, tribe, and privilege. The Sum of Small Things serves as a much-needed corrective for those of us equipped with the cultural capital to have read in the Economist how important a contribution it is. 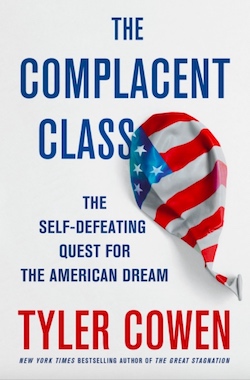 The Complacent Class:
The Self-Defeating Quest for the American Dream
By Tyler Cowen


Economist Tyler Cowen’s 2017 book The Complacent Class picks up where his previous work, The Great Stagnation, left off, exploring why American society today seems to have shifted into neutral. With entrepreneurship at historical lows, people moving and changing jobs less frequently than in the past, cities frozen by impenetrable land use regulations and obstructive NIMBYism, and a culture that seeks safety and stasis over dynamism, the United States has now experienced decades of low growth and relatively little major change and technological progress, or so Cowen argues.

Is complacency desirable and inevitable? In the 20th century, the United States achieved an unprecedented level of peace and prosperity. What Cowen sees as complacency and stagnation might be satisfaction and contentment, which are arguably the goals of the project of modernity. On the other hand, with rising economic rivals in Asia, high debt and cost of living, growing political bitterness, awareness of genuine societal injustices, and a general decline of trust in social institutions, it is not clear that complacency can or should continue.

It’s hard to read Cowen’s argument and not also think about the world’s energy picture. We have known for decades that dependence on fossil fuels creates serious environmental risk. More than 40 years since the first oil crisis and billions of dollars of investment in research and development later, over 80 percent of the world’s primary energy still comes from coal, oil, and natural gas. The pace of progress is maddeningly slow and clearly inadequate to avoid dangerous climate change.

Cowen’s understanding is that sooner or later, societal circumstances will force a change. Such systemic tipping points are difficult to anticipate, in the energy sector in particular. Investments going back to the 1970s in hydraulic fracturing paid major dividends in the 2000s, while investments from the same period in wave and ocean thermal power have not. We may not be able to control the major disruptions that are to come, but we can make the investments today that will lay the groundwork for the outcomes we want when those changes occur. That will require a shift in public attitudes away from NIMBYism and complacency, however, and toward a broader embrace of large-scale innovation, dynamism, and change. 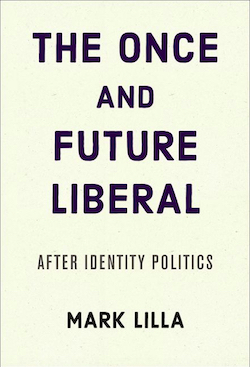 The Once and Future Liberal:
After Identity Politics
By Mark Lilla

The election of Donald Trump to the presidency has invited no shortage of hand-wringing about the future of the American left. Something broke in 2016, and Mark Lilla, a history professor at Columbia, is among the many to offer a fix. One of the staunchest critics of “identity politics” since the election, Lilla’s slim volume launches an initially compelling line of attack: a politics based in identity is an atomizing politics. It divides; it precludes solidarity.

Out of the ashes of identity, Lilla invites us to reconstruct liberalism around a common idea of “citizenship,” which he believes would lead to a more inclusive, less divisive politics. “We must re-learn how to speak to citizens as citizens and to frame our appeals . . . in terms of principles that everyone can affirm,” Lilla writes. Oddly enough, though, he is explicit that his proposed notion of citizenship does not extend to any discussion of “immigration and refugees.” If identity politics abdicates responsibility for the common good, as Lilla argues, his conception of citizenship apparently has nothing to say about one of the most pressing public questions of our time — who is and who isn’t a citizen.

Like too much political commentary in this hypermediated space, The Once and Future Liberal is heavy on invective and light on intellectual history. Marx gets the most mentions, which is strange because neither Lilla’s problem (identity politics) nor his solution (citizenship) has much to do with Marxism or Marxian analysis. No attention at all is paid to the humanists and legal scholars who laid the foundation for identity politics — Judith Butler, Kimberlé Williams Crenshaw, and Audre Lord come to mind. Meanwhile, the critical investigation of citizenship goes right back to the beginning of Western political thought, but Lilla evidently has nothing to say about it.

Instead, Lilla spends most of his time haranguing identity-based activist movements. “Black Lives Matter is a textbook example of how not to build solidarity,” he scolds. “I’m here, I’m queer will never provoke more than a pat on the head or a roll of the eyes.” But it is not clear, empirically, that this is true. Most liberals (and many moderates) would consider the movements for the civil rights of African Americans and LGBT citizens two of the leading achievements of postwar American politics. Lilla struggles to explain how these movements, in their present form, are actually the problem.

Surely Lilla does not actually disagree with “I’m here, I’m queer.” The identity politics of LGBT recognition has delivered a materially better life for millions in recent decades. The legacy of American liberalism has indeed been the extension of the rights and privileges of full citizens to more and more Americans. After 2016, liberalism cannot hide behind a vague ideological notion of that citizenship, one that elides the many identities and inequalities it purports to encompass. Instead, it must seek out concrete, pragmatic solutions to confront those messy realities head on.

Read more from Breakthrough Journal, No. 8

Emma Brush is Co-Managing Editor of the Breakthrough Journal. 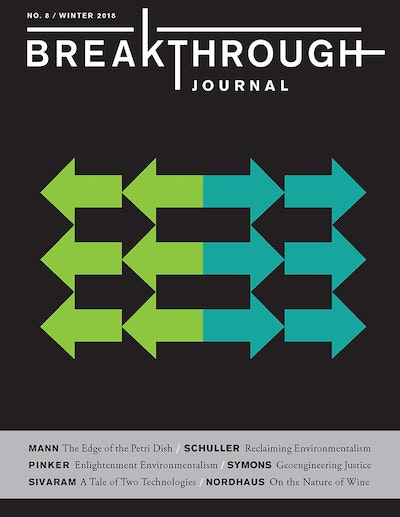