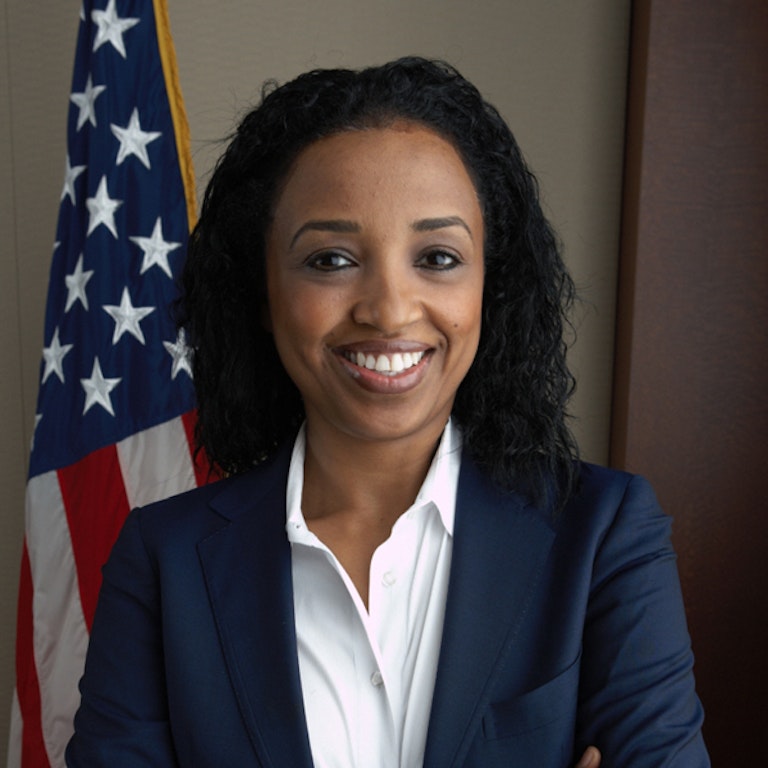 Mimi Alemayehou was appointed by President Obama and unanimously confirmed by the Senate as the Executive Vice President of the Overseas Private Investment Corporation in March 2010. OPIC, the U.S. Government’s Development Finance Institution manages an $18 bn portfolio of financing and insurance in support of private sector investment in emerging markets.

Previously, Ms. Alemayehou served as the U.S. Executive Director at the African Development Bank where she was responsible for executing Board decisions on behalf of the United States Government. As the most senior U.S. Treasury official in Africa, Ms. Alemayehou was instrumental in pushing the Bank to become more transparent and more broadly engaged with outside stakeholders. She received a Distinguished Honor Award from then U.S. Secretary of Treasury, Henry Paulsen, for her outstanding service.

Prior to the African Development Bank, Ms. Alemayehou was Founder and Managing Partner of Trade Links, LLC, a development consulting firm that worked with clients on emerging markets issues and in promoting African exports under the African Growth and Opportunity Act.

Ms. Alemayehou also was with the International Executive Service Corps where she managed a multi-country trade project in Africa, and WorldSpace Corporation as a Director of International Regulatory Affairs for this emerging markets-focused satellite telecommunications company. She started her career in the U.S. Congress, working on legislative issues for U.S. Congressman Mac Thornberry.

Ms. Alemayehou holds a Masters degree in International Business and International Law and Development from the Fletcher School of Law and Diplomacy, Tufts University. She currently serves on the Board of the U.S. African Development Foundation, a post to which she was nominated by President Obama (with unanimous consent by the Senate).

Ms. Alemayehou is a naturalized U.S. Citizen; she was born in Ethiopia and spent her early years in Kenya before emigrating to the United States. In 2013, she was recognized by Forbes as one of 20 Young Power Women from Africa.