Ecomodernists in Finland and Oysters in California

Dispatches from the Front Lines of the Ecomodernist Movement

“Ecomodernism is an environmental movement that seeks to defend and enhance the environment’s well-being while simultaneously increasing possibilities for human prosperity. For ecomodernists, both the vitality and diversity of natural world and the existence and progress of humanity are fundamental values.”

That's an excerpt from the Charter of the Ecomodernist Society of Finland, founded this summer by 8 Finnish Ecomodernists. In a post on his blog, founding member Janne M. Korhonen reflects on the Society's first public workshop and the reception to Ecomodernism within Europe and elsewhere. Like ecomodernistmom.org, this Society was a surprise to us at Breakthrough, but we're extremely happy to see our vision spreading. More than anything else, we're interested to see how Ecomodernism appeals to different groups of people. As Janne writes, "there are probably as many reasons as there are people identifying themselves as ecomodernists." It's a learning experience for all of us.

This week, Breakthrough's Director of Conservation Linus Blomqvist offered a great contribution to a series on sustainable intensification hosted by the Water, Land, and Ecosystems (WLE) program of CGIAR. Linus, who is lead author on Breakthrough's new report Nature Unbound, argues that intensification of agriculture is fundemantally sustainable, because growing more food with fewer resources on less land spares more nature. Among other key observations:

Big thanks to WLE's Nate Matthews for hosting this great series on sustainable intensification. You can read all the entries here.

Speaking of sustainable intensification, I was pleased to see this great piece at Grist by Nate Johnson get the attention and priase it deserves. Nate uses Summer Brennan's new book The Oyster War as a frame for his discussion of intensive vs. extensive agriculture. Brennan's book follows the story of Drake's Bay Oyster Farm just north of San Francisco on the Pacific Coast. As Nate asks, "Do we farm intensively, so as to leave as much land as possible for wilderness? Or do we farm extensively, taking up more space, but allowing more biodiversity and aesthetic beauty in that space? Land sparing, or land sharing?" Read the whole thing -- it's a great case study in how to save nature, landscape planning, and how diets drive conservation.

Something many of us have been excited about for years became (more) official this week, when Bill Gates' nuclear startup TerraPower signed an MOU with the China National Nuclear Corporation to collaboratively develop TerraPower's innovative 'traveling wave' reactor design. It's flagship example of what we at Breakthrough call high-energy innovation: the idea that rapidly industrializing countries like China are exactly where we should expect and hope future energy innovation to occur.

Many of us are pleased to see the attention that energy poverty is getting in the press and policy world these days. 10 years ago, no one talked about energy poverty. For instance, energy was not a key focus of the Millenium Development Goals established in 2000. That looks like it will change -- significantly -- with the upcoming Sustainable Development Goals, to be agreed upon this week at the United Nations.

In a blog post this week, Todd Moss of the Center for Global Development highlights a recent campaign in support of the SDGs, a call to #LightTheWay to combat global poverty. As Todd writes, "It’s a lovely image: millions of people holding “candles, lanterns, and torches!” to urge world leaders as they meet in New York to make commitments to make the world a better place...Yet there’s something ironic, and perhaps unsettling, about all of this. Candles, lanterns, and torches are the types of lights people in developed countries use when the regular lights go out." Todd's reflection is a reminder that while energy poverty has rightly gained prominence in global discussions of poverty and development, the dominant discourse still tends to imagine that energy poverty will be solved with extremely low levels of energy access.

This is a issue not only of problem definition, but of policy provisions. Todd was a co-author on our 2014 report Our High-Energy Planet, which explores more how to deliver energy access and how to ensure it powers real, robust socioeconomic development.

I have to highlight an op-ed in The Guardian that pushed me over the edge a bit on Twitter. The title of the op-ed, authored by LSE professor Jason Hickel, is "Forget 'developing' poor countries, it's time to 'de-develop' rich countries." Which, like...what.

I don't know what it is about rich academics and economic growth, but a bunch of them seem pretty comfortable opposing it (click here to read "A Degrowth Response to An Ecomodernist Manifesto"). Roger Pielke authored a great exploration of different kinds of 'anti-growth' ideologies a few years ago you should read if you're interested.

Hickel's own view confuses me. He simultaneously argues that $1.25/cap/yr is too low a threshold for extreme poverty and that global poverty reduction goals are aggressively unrealistic. He also argues that economic growth has failed to reduce the numbers of the impoverished...if you ignore the biggest poverty reduction success story of the last generation. (To wit: "even the $1.25 line shows that, without factoring China, the poverty headcount is worsening, with 108 million people added to the ranks of the poor since 1981." Emphasis mine.) My further thoughts are available, under a heavy layer of frustration, on Twitter: 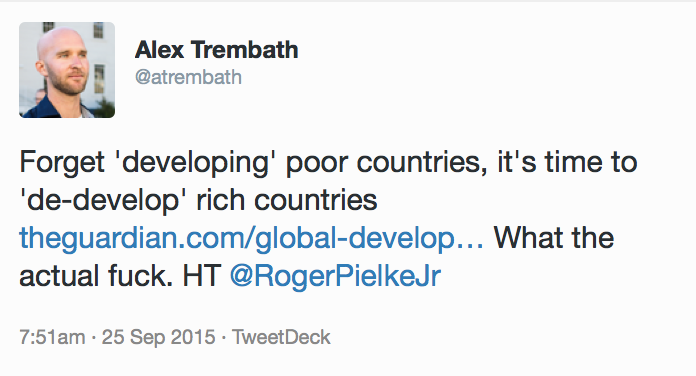